Police found crack in woman’s underwear
police allegedly found crack in a woman’s bra and a crack pipe in her underwear after stopping her for running a red light.
The officer who pulled over Tommi Jelinda Chambers, 23, of , noticed she appeared to be holding something in her left hand, according to a police report.
When asked what it was, Chambers opened her hand and said there was nothing there but several pieces of crack cocaine fell onto her lap.
She admitted it was crack and began crying, according to the report.
While being searched, police found a crack pipe and a pill bottle hidden in her underwear as well as another crack pipe and several more crack rocks in her bra.
The pill bottle contained Buprenorphine and a search of her car turned up Oxycodone, neither of which she had a prescription for.
.

$2 Lands Woman In Jail
A woman is behind bars after a man says he gave her $2, but later took it back. He told police she then ran him over with the car.
Andrew Toby said he gave 31-year-old Michele McGraw the money in the parking lot of the Pizza Hut on 103rd Street. When Toby took the money back, he said McGraw became angry and chased him with the car.
Toby was taken to the hospital with serious injuries. Witnesses said they saw a car hit Toby and then crash. McGraw and a passenger were seen walking away from the wreck.
McGraw was charged with aggravated battery, leaving the scene of an accident and driving without a license.
.

Man vomits contraband stash in jail
A Noorvik Alaska man already in jail for alleged assault charges got a contraband count added when he vomited a stash of cigarettes when in jail.
Troopers say 20-year-old Johnathan Carter swallowed the bag with two cigarettes in it in anticipation of going to jail.
Carter, 18-year-old Jack Wells and 28-year-old Thomas Nay were involved in a fight over stolen items. Troopers say family members and friends also were part of the altercation, which include a knife, a rifle, baseball bats and snowmobiles.
.

Hallucinating men call 911 for help
authorities say two men became so high on drugs they began hallucinating and called 911 when they thought intruders had broken into a home.
sheriff's spokesman David Ehsanipoor said the pair is suspected of using methamphetamine around the time they called 911 for help.
Deputies responding around 4 a.m. to the home outside were told by the pair that people in a back bedroom had broken into the home, but no intruders were found.
Ehsanipoor said deputies realized they were hallucinating. He said "they were so high they called 911 on themselves."
.

Man scared of heights bungee jumps
A bungee jump in apparently arranged by a woman to help her future husband face his fear of heights turned into a three-hour ordeal 50 feet up when the cables got tangled.
firefighters used an aerial ladder truck to rescue William Mancera and Thalia Rodriguez of Irving.
Dallas Fire-Rescue Lt. Joel Lavender said Tuesday that neither was injured.
The couple, who plan to marry next year, seemed in good spirits after the incident and mentioned that Mancera has a fear of heights. Lavender says the ride was meant to be kind of a fun thing, as "a gift on her part, a challenge on his part."
.
Posted by The Man at 7/20/2011 No comments:

Tammy Lee Hinton, 50 of Port Richey had just said "I Do" when officers swooped in and arrested her at the City of Zion Ministries church in 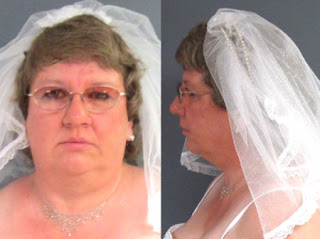 .
The bride had been wanted for two years on a warrant for identity theft. The victim of the rip-off was her son, according to authorities.
authorities say Hinton racked up about $3,000 in utility bills in 2009 under the name of her son, Wesley Knauf, then 17. He discovered the debts when he applied for a credit card. Wesley searched through his mother's bills and found many with his name on it.
Hinton was booked Saturday at the jail in her bridal attire. After posing bail she managed to make it back in time for part of her wedding reception. But Hinton was a no-show at her Monday arraignment.
.
Posted by The Man at 7/20/2011 No comments: