The latest souvenirs from , elephant dung from the Zoo. The brain behind the idea is Miroslav Bobek, and get this his surname literally means dung!
. 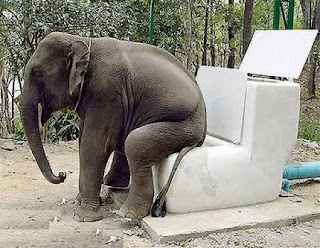 .
It seems to be a big fad among the gardeners who buy the pails of manure to use on gardens. They sell about 200 of the 2.2 pound containers on the weekend for $3.90 each. Sales have been growing so much that they have decided to sell it on the weekdays as well.
The visitors of the zoo laugh as handlers collect the piles of dung for sale, but most of them state that they wouldn’t buy the elephant turds.
. 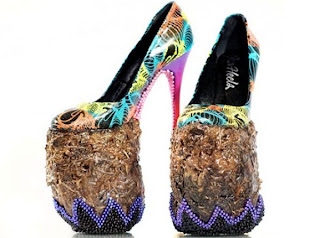 .
Not related to the zoo dung sales these elephant dung shoes are also up for sale. They are ten inch stiletto heels and created by a mysterious artist that goes by the handle INSA.
.
Posted by The Man at 5/17/2011 1 comment:

Man to eat his 25,000th Big Mac today
Don Gorske plans to eat his 25,000th Big Mac on the 39th anniversary of eating his first.
A special ceremony is planned at McDonald's in Tuesday afternoon.
The 57-year-old man says he ate nine on May 17, 1972 and has only missed eight days since then, for various reasons. He usually eats two a day.
He has kept most of the boxes or receipts or has made specific notes in calendars that he's kept.
Gorske says he probably has an obsessive-compulsive disorder but he doesn't consider it a problem.
He jokes that 25,000 is a milestone because people didn't think he'd live this long. But he says he recently saw a doctor who said he was in good health and his cholesterol is low.
If he lives as long as his dad, Gorske will have consumed 40,000 Big Macs when he turns 86.
"I think 25,000 is a pretty awesome number," he said. "I'll never live long enough to eat 50,000."
.

Naval artifact stolen from park
Authorities in city said thieves took a piece of a battleship weighing more than a ton from a public park and may try to sell it for scrap.
Stephanie Benavidez, an and Recreation employee, said the brass ring, once used to port torpedoes on the USS Maine, was broken from its concrete base last week and was taken Friday night.
Benavidez said the thieves may be planning to sell the ring for scrap.
"I would hope the recycling people will recognize that one, this isn't something somebody had in their attic or backyard or got at a yard sale and contact us and say, come get it," she said.
.

Store urinater, I'm Bruce Lee
Authorities in said a man accused of urinating inside a convenience store identified himself to deputies as "Bruce Lee."
The Eau Claire County Sheriff's Office said a deputy responded to a convenience store in the town of Creek and a pair of employees said a highly intoxicated man had urinated on a door marked "employees only" and knocked over a prepaid calling card display before leaving the store.
The employees took down the man's license plate number and deputies tracked the plate to an address in where they found the 26-year-old suspect.
The man, whose real name was not released, identified himself as martial artist and movie star Bruce Lee, who died in 1973, deputies said.
The man was arrested on misdemeanor charges of lewd and lascivious behavior, disorderly conduct and obstructing an officer.
.

Hairy-faced woman robbed man of $2,800 thief
A 51-year-old man told police a woman sporting "facial hair" stole his wallet May 10 in what could be called a hair-raising experience, according to a recently released report. The wallet contained $2,800, credit cards and the man's driver's license.
The female with facial hair flagged the man. She got in his van and asked for a ride to a house. While waiting for a light to change, the woman reached in his right front pocket and took his wallet. She got out of the van and ran.
The report didn't indicate whether the woman's "facial hair" constituted a moustache, mutton chops, Vandkye, five-o-clock shadow, peach fuzz, sideburns, goatee, soul patch or flowing ZZ Top-style beard.
.

$1.10 a gallon gas
Word spread quickly about a gas station selling premium unleaded for $1.10-a-gallon, but it wasn't a promotion. The owner says the too-good-to-be-true price was a computer glitch that cost him $21,000.
Long lines snaked from the pumps at the Valero station in . Police were even called to control traffic.
It was reported that within four hours, about 7,000 gallons of premium were pumped at the discounted rate.
Station owner Kenny Nguyen says the attendant on duty was busy staffing the convenience store and register.
He says a price change didn't take, so the system defaulted to the $1.10 price - a cut of more than $3 a gallon.
Nguyen hopes motorists who got the break come back and pay the real price.
.

Customs seized bologna hidden in pickup
It wasn't drugs or human trafficking but illegal bologna that caught the attention of border agents at a port of entry.
U.S. Customs and Border Protection officers at Santa Teresa seized 385 pounds of the Mexican contraband meat from behind the seat of a pickup that stopped at the port on Friday.
It's illegal to bring the bologna across the border because it's made of pork and has the potential to introduce foreign animal diseases into the pork industry.
The 33-year-old Mexican man who was transporting the meat was assessed a $1,000 fine and released.
Usually officers see one or two rolls of bologna - not 35 as in this case. Officials say it was the largest bologna bust ever recorded at the Santa Teresa crossing.
.
Posted by The Man at 5/17/2011 No comments:

sophomore Cameron Nunez was a winner in the second annual Scotch Off The Roll Tape Sculpture Contest, sponsored by 3M, the company that makes Scotch tape and Post-it notes.
. 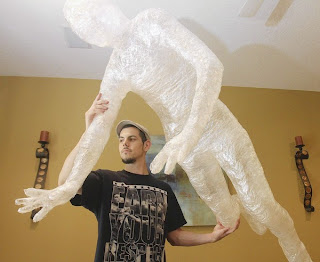 .
Nunez was both a runner-up in the overall contest, decided by a panel of artists, and the winner of the "People's Choice" award for the sculpture with the most online votes — 1,384.
His entry, called "Sing and Scream Along," depicts a life-sized people at a mosh-pit concert.
. 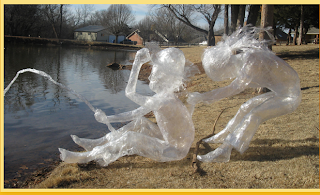 Click to Enlarge
.
How did he do it?
Nunez wrapped tape, sticky side up, around body parts. Using surgical scissors to cut the cast off, he then wrapped more layers — this time sticky side down.
He used at more then 24 rolls.
Nunez won $500 — and a supply of Scotch tape.
A contest rule stipulates 90% or more of your sculpture must be made from Scotch® Heavy Duty Shipping Premium or High Performance Packaging Tape.
.﻿
Posted by The Man at 5/17/2011 No comments: