7-foot-long dog could be record holder 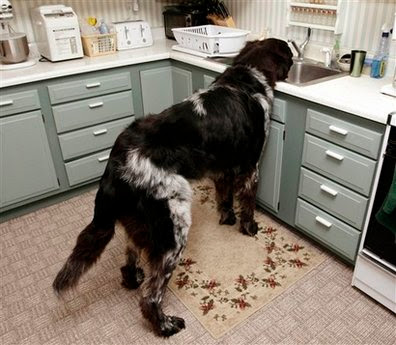 Boomer may be a buster: Measuring 3 feet tall at the shoulders and 7 feet long from nose to destructive wagging tail; he might be the world's tallest living dog. Owner Caryn Weber says her 3-year-old Landseer Newfoundland keeps all four paws on the floor when he drinks from the kitchen faucet in her family's eastern North Dakota farm house.
Boomer stares into car windows eye to eye with drivers. A 20-pound bag of dry dog food lasts the 180-pound canine a couple of weeks.
Weber says her furry black and white dog "comes into the house and his tail is so high everything gets knocked around."
Weber plans to send Boomer's measurements to Guinness World Records. The previous record holder was a nearly 4-foot-tall Great Dane that died this summer.
.
Posted by The Man at 10/09/2009 No comments:

Malaysian couple faces caning over car sex
An Islamic court has ordered an unmarried couple to be caned for trying to have sex in a car in the latest of a series of harsh punishments for Muslims in Malaysia, a lawyer says.
Though Malaysia has long been upheld as an example of a moderate Muslim-majority country, recent verdicts sentencing Muslims to whipping for drinking alcohol have made headlines.
Two months ago, an Islamic judge triggered a national debate when he ordered a woman to be caned for drinking beer.
In the latest case, the Shariah High Court in central Selangor state sentenced the couple on Wednesday to six strokes of the cane after they pleaded guilty to trying to have sex out of wedlock in their car, lawyer Shafezan Rusli said on Friday.
Shafezan said Islamic religious police caught Mohamad Shahrin Abdul Majid, 29, and Nadiah Najat Hussin, 24, with only their undergarments on in a car at an office parking lot in May.
.
Man grabs female cops butt while in jail
A 48-year-old man is on trial in Helsingborg in south-western Sweden for having sexually assaulted a police officer following an interrogation for other alleged sex crimes.
“I wanted to commend her for shaking her rear end so nicely,” the man said in court.
The 48-year-old's fondling of the female officer’s backside came after he had been questioned about a number of other sex-related crimes.
The man was being escorted to his detention cell by two female officers, and while the three were waiting for the cell door to open, the 48-year-old suddenly reach out and grabbed a hold of one of the officer’s buttocks.
“He grabbed me with a rather large hand and managed to grab the whole cheek. I felt violated and dirty,” the police woman said in court when describing the incident.
The 48-year-old, then shocked the courtroom further by explaining that he was justified in reaching out to the female officer because she had been giving him long stares and that felt he had sort of gone a date with her during their police car ride to the station and during the interrogation.
He then added that he had no intention of having sex with the officer, but merely wanted to compliment her with a pat on the rump “like you do in Lithuania where the women are quite pleased by such gestures”.
.
Buck naked backyard dancer sought
Dallas police are looking for a man who they say repeatedly sneaks into backyards, dances around naked and then runs away.
Police believe the man has been exposing himself in the same neighborhood since 2005. The most recent incident was on Sept. 30.
Police say he usually climbs a fence or goes through a gate and either dances naked or jumps in a swimming pool naked. Police say he also has danced naked on top of a backyard air conditioning unit.
Police say they're looking for a pudgy man who is about 6 feet tall and covers his face while dancing.
.
Fire Rescue workers prank their own
This is what Hillsborough County fire medic Miguel Ruiz got home to find after one Saturday night in August:
His home toilet papered, and dish-washing powder on his lawn. Clothes taken out of his closet. The television wrapped in paper towels. Unused condoms on the floor, A plastic bag or a roll of bags in the commode, along with short, coarse hairs.
The culprits? His friends and colleagues, six fellow fire medics and one captain, who later admitted the hairs, had come from his own belly.
All seven men faced disciplinary action after Ruiz reported them, saying they went too far.
It all started on the night of Aug. 15. Current and former Station 14 firefighters attended a baby shower at Capt. E.J. Fernandez's home. Ruiz, 26, didn't go.
"Since Miguel did not show up, a group of party attendees went to a nearby convenience store to pick up supplies to 't.p.' the outside of his home," the report begins.
But they didn't stop at toilet paper. Once there, they found an unlocked door and let themselves in.
.
Deputies search for lewd dude in Bonita
The woman said she was walking out of a Bonita Springs gas station when a man approached her and said, "F***, you look fine," according to a Lee County Sheriff's Office report.
The woman got into her vehicle and began driving on I-75 when the man, driving a silver truck, began trying to get her attention by honking his horn and telling her to put her window down.
The suspect then passed the woman, wrote down the business cell phone number that was displayed on the side of her vehicle, and then called her.
He asked her if she was the blonde in the green truck.
She asked who this was.
'I'm the guy next to you,'" he said.
After they pulled off the interstate, the man told her, "Today is the day I'm going to f*** you," the report said.
Then, according to the woman, the man got up from his seat and began masturbating.
She finally arrived safely at her business. But while she was unloading supplies from her truck, she turned and spotted the man who was still masturbating.
.
Posted by The Man at 10/09/2009 No comments:

LOOK WHAT I LEARNED IN SCHOOL TODAY 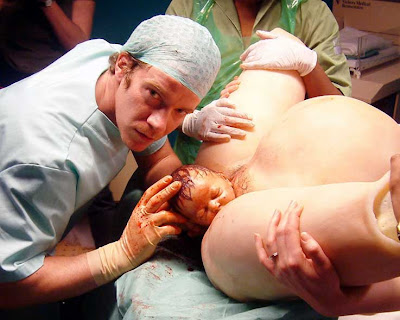 Scottish 4-year-olds get SEX EDUCATION
Children as young as four are to be given sex education in school, a city council said today. Primary one pupil’s in Glasgow will learn the names of body parts, including male and female genitalia, and will learn about reproduction.
Posted by The Man at 10/09/2009 No comments:

Soldier Working out with Barb Wire 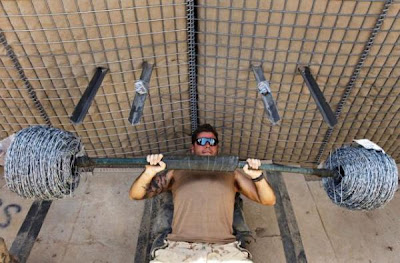 Use TP Not PT 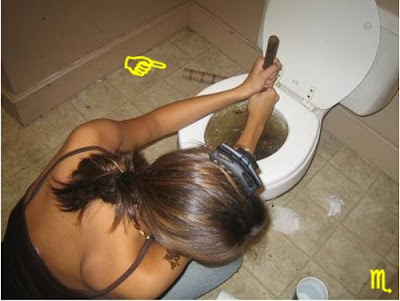