One reason why Asians are not over weight they don’t sit down. 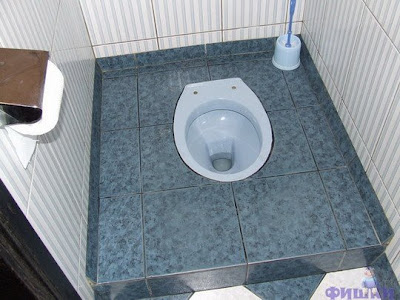 OR HURRY UP AND GO FEMALES SO THERE WILL BE NO WAITING
.
This would be bad to squat over to use or vomit into when you're drunk.
Posted by The Man at 9/25/2008 No comments:

Weird stuff like this will happen if you do drugs, failed high school, grew up without a father, hate yourself and have no girlfriend. 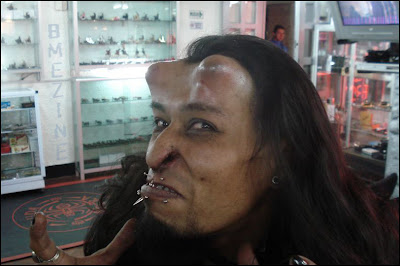 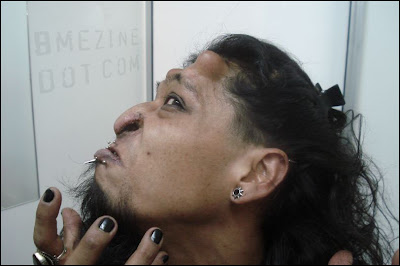 One Liners
1. When I was born, I was given a choice - A big d*ck or a good memory. I don't remember, what I chose.
2. A wife is a sex object. Every time you ask for sex, she objects.
3. Impotence: Nature's way of saying 'No hard feelings...'
4. There are only two four letter words that are offensive to men - 'don't' and 'stop', unless they are used together.
5. Panties: Not the best thing on earth, but next to the best thing on earth.
6. There are three stages of sex in a man's life: Tri Weekly, Try Weekly and Try Weakly.
7. Great news . . . Virginity can be cured !!!
8. A couple just married were happy with the whole thing. He was happy with the Hole and she... was happy with the Thing......
Posted by The Man at 9/25/2008 No comments:

The sexiest girls of the Pac10

He’s 7 years old and he f**ks bitches in the booty.

7 Year Old Pimp
.
THIS IS WHY THIS WORLD GOING TO HELL. HIS PARENTS ARE NOT DOING THEIR JOB AND TEACH THIS KID FROM RIGHT AND WRONG.
Posted by The Man at 9/25/2008 No comments:

ALL THE WOMEN HURRY AND COVER THEMSELVES EXCEPT FOR THE ONE THAT DOING SOMETHING IN HER CAR'S TRUNK IT APPEARS SHE LIKED IT.
.
Anyone up for a copy cat of this in America? LOL!!
Posted by The Man at 9/25/2008 No comments:

Cop Gets Attacked With Gas
Driver arrested after farting on police officer
A man arrested for driving under the influence in West Virginia got himself into a lot more trouble later at the police station.
Jose Cruz was pulled over Monday night on Route 60 in South Charleston for driving with his headlights off. He was subsequently arrested after failing a series of sobriety tests.
During fingerprinting, Cruz then allegedly moved closer to one of the officers and passed gas, the station reported. In the complaint, the investigating officer wrote that police noticed a "very strong" odor.
The alleged stunt led Cruz to be charged with another offense — battery on an officer — in addition to DUI and obstruction,
Picture
.
Battery on an officer??
Wow...that’s some bad ass gas if it beats up a policeman.
Lets hope the terrorists don’t get wind of it...
.
When Bumper Sticker Goes 'Beyond a Joke'
Australian gun lobbyist Ron Owen has been told he is entitled to express his homophobic views, but that he went too far with the bumper sticker: "Gay Rights? Under God's law the only rights gays have is the right to die."
The tribunal ruled that Owen — while not the registered owner of the car — had use of it and that the sticker went "beyond a mere joke."
.
Man Sues Doctor Over Stapled Rectum
A 64-year-old West Virginia man is suing a Maryland doctor for allegedly stapling his rectum shut during an operation. Ronald Watkins claims the 2004 surgery for a rectal tumor left him with permanent bowel problems. Watkins then underwent four additional surgeries after being unable to defecate for 17 days. The attorney for Doctor Manuel Casiano tells that the bowels were merely swollen shut do to other medical problems. The federal lawsuit is being heard in a Baltimore courtroom. A judgment is expected before the week is out.
.
NOTHING LIKE BEING FULL OF SHIT LITERALY
.
Man Wakes Up To Half A Sex Change
A Shelby County man and his wife said two doctors amputated the man's penis without his consent, and have filed a lawsuit.
According to the lawsuit, Philip Seaton went to have a circumcision last October. Seaton said when he woke up from the procedure, he realized his penis had been amputated.
Seaton has suffered mental anguish, pain, and has lost the enjoyment of life, according to the lawsuit.
The lawsuit was filed in Shelby County court last week against Dr. John Patterson, who performed the procedure, Dr. Oliver James, who administered anesthesia, and Commonwealth Urology, PSC.
The lawsuit states that Patterson received consent to perform a circumcision and only a circumcision, and that Seaton did not consent to his penis being removed.
Kevin George, the plaintiff's attorney, said Patterson amputated the organ after finding cancer, but he only had consent to remove the foreskin.
"Sometimes you have an emergency and you have to do this, but he could very easily closed him up and said, 'Here are your options. You have cancer,' and the family would have said, 'We want a second opinion. This is a big deal,'" George said.
Posted by The Man at 9/25/2008 No comments: