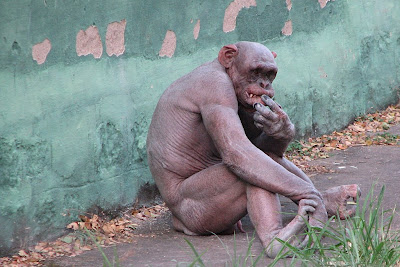 .
Why is this Chimp hairless?
Chimps can suffer from a condition known as alopecia universalism--complete and utter hairlessness (this is also found among 1.7% of the human population).
.
Posted by The Man at 4/25/2009 6 comments: 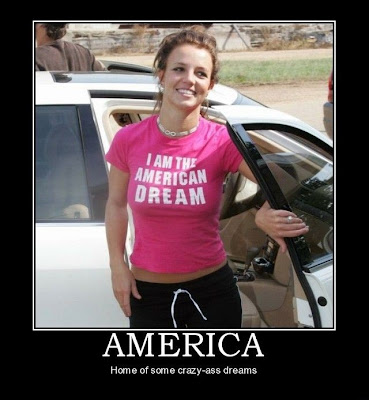 Squirrel on a Mission

Question
How in the hell did he get up on top of the buckets? 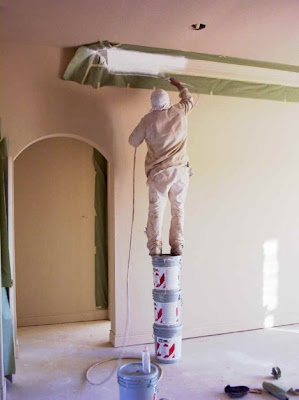 Why You Don’t Park Under A Garbage Chute 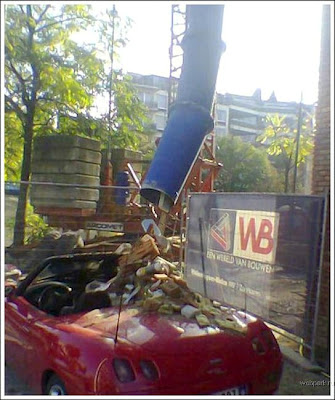 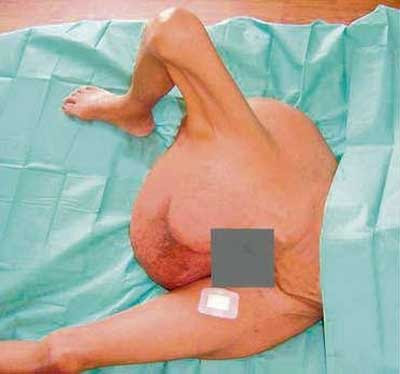 The tumor was so big it was half the size of its victim!

German doctors say they have successfully removed an 40-pound malignant bone tumor from a Saudi Arabian woman.
Berlin surgeon Heinz Zurbruegg says the 35-year-old had only a few weeks to live when she arrived in Germany for care in September. But he says that after five operations no traces remain of the huge tumor that once ballooned from her pelvis.
It accounted for about a third of her then total body weight of around 120 pounds.
Surgeons say the woman, who now weighs 82 pounds, is well enough to return home.
If follow-up exams show no sign of any tumor, the next step will be to reconstruct the partially removed pelvis and give her an artificial hip. 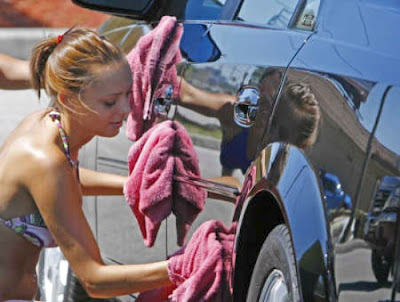 Within seconds of being washed four women, all wearing bikini tops and each carrying two towels, walked toward the vehicle.
One climbed into the truck's bed.
The others positioned themselves along the sides and front.
Then, almost simultaneously, each began drying it.
Not far away men were enjoying the show.
There’s nothing better than getting your car washed by beautiful women.
Posted by The Man at 4/25/2009 1 comment:

Muggers give back phone after discovering its value
A group of teens who mugged a Croydon man gave back his phone because it was too cheap to bother stealing.
Migui Rowlands was ambushed by the group of youths who ransacked his pockets in Alton Road on April 9, but when they pulled out his £9.99 Sagem phone the kids were less than impressed.
Mr Rowlands said: "They took my wallet and stole about £30. But when they looked at my phone they gave it back.
"They told me: ‘we can’t do anything with that’. It is just one of these cheap jobs.
"In some ways I was pleased because it had all my numbers on it."
The 44-year-old said it made him grateful he was not carrying around an expensive phone.
.
Over 200 pot plants found in car during traffic stop
If you're transporting marijuana plants in your vehicle make sure you follow these simple rules
1) you have a valid driver's license
2) you are obeying traffic signs
3) your rolling papers and baggie of dope are not in plain view in the front pocket of your shirt.
.
The Charlotte County Sheriff's Street Crimes Unit made a traffic stop on a driver who ran a stop sign Wednesday night and found 209 marijuana plants in the car.
According to the Charlotte County Sheriff's Office, the incident occurred at Birchcrest Blvd. and Gibralter Drive in Port Charlotte.
When deputies approached the driver, 23-year-old Matthew Allen Ward, they observed a large plastic tray in the back seat with the pot plants.
Deputies said they detected the smell of recently burned marijuana coming from inside the car. Ward appeared nervous and was shaking, and then deputies saw a plastic baggie and rolling papers sticking out of his right front pocket in plain view.
Total weight of the marijuana seized was 43.2 grams. Based on the evidence collected, Street Crimes deputies had probable cause to charge Ward with Cultivation of Marijuana, Possession of Marijuana over 20 Grams, Possession of Drug Paraphernalia, and Driving Without a Valid Driver's License. He was transported to the Charlotte County Jail with bond set at $9,000.
.
Posted by The Man at 4/25/2009 No comments:

Embarrassed by Skid Marks? Not Anymore!

Rob Libfeld, a medical student at the University of Massachusetts, invented these durable boxers, after noting how embarrassed patients get during long hospital stays when their skivvies turns foul.
Libfeld says, "The main problem is all-white underwear. Let's face it, the stains really stand out."
Libfeld's solution is really quite elegant, if not low-tech. He's designed two-toned undies that are yellow in front, brown in back, so if you have an accident, it won't stand out, and you won't feel as bad.
While this invention might not land this med student a plumb job at the Mayo Clinic, it's one way for any doctor or hospital visitor to show some bedside humor. "Also," he says, "It's a great Father's Day gift."
And at $12.99, it'll save you a ton of embarrassment.
.
Posted by The Man at 4/25/2009 1 comment: