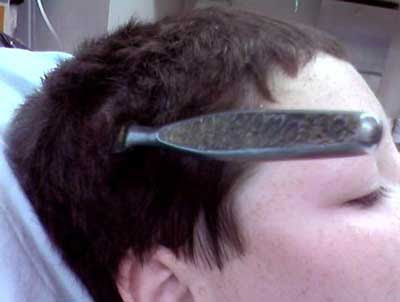 VANCOUVER, Wash. -- A Vancouver boy had a butter knife pulled from his head at a hospital Sunday.

Tyler Hemmert said he and a friend were sitting on a park bench when another boy became angry with them and threw a knife at them.

“When he threw it, we both ducked,” said Nate Leach, Tyler’s friend. “… It just stuck him in the head.”

Labels: In The News, That Gotta Hurt, WTF?

You can run but you can't hide from me 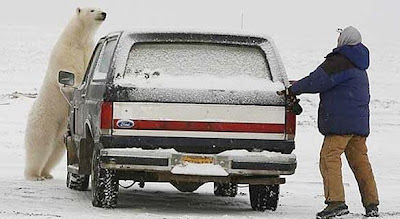 13-year-old Blows Up 213 Balloons With His Nose 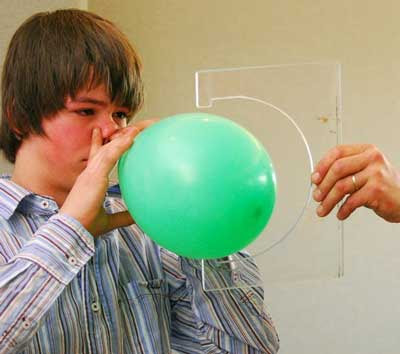 BLAINE, Wash. (AP) — A 13-year-old boy is claiming the world record for blowing balloons with his nose. Using one nostril at a time, Andrew Dahl inflated 213 balloons within an hour Friday in the town's public library. His feat has been submitted for review by Guinness World Records.
His father, Doug Dahl, measured the balloons to make sure each was at least 20 centimeters, about 8 inches, the minimum diameter, and his mother, Wendy Dahl, kept the tally.
At one point he asked, "Does this count as practicing my trumpet?" His mother replied, "Only if you can play that with your nose."
It was his second try. In February he sent a videotape of himself inflating 184 balloons, only to learn that it didn't count because he handed them to his father to tie. This time he tied them off himself.
Posted by The Man at 4/15/2008 No comments: 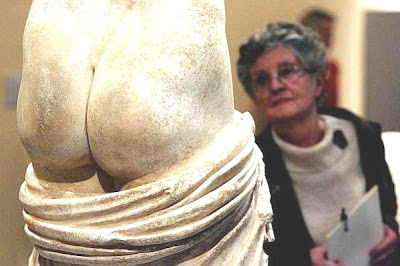 Baseball pitcher recieves a 100 MPH line drive to his head.

Self-inflicted double shotgun blast
A 20-year-old man shot himself in the groin early Sunday while trying to hide a shotgun down his pants, city police said.
A news release did not describe the injury except to say that it was "serious."
The victim was being treated at Harborview Medical Center in Seattle. His injuries were not expected to be life-threatening, medical officials told police.
Officers responded to the 700 block of North 24th Avenue about 1:30 a.m. Sunday. They found the victim on the side of the road. He had fired two rounds from the double-barreled weapon, police said.
Police were continuing to investigate after they recovered the shotgun and an additional firearm reported stolen at the house where the shooting took place.
.
Nervous thief left his DNA at the crime scene
A thief who threw up before fleeing the scene of a hold-up last year has been jailed after police matched his DNA with vomit left at the crime scene.
Ahmed Habib Jalloul, 20, was found guilty of aggravated robbery in the District Court earlier this month for his involvement in the robbery of the Kensington Gardens post office in April 2007.
The court heard that Jalloul had vomited "out of fear" outside the post office, in a nearby car park after the robbery, before fleeing in a stolen car with two accomplices and $3700 in cash.
A later DNA analysis of the vomit slick matched Jalluol's DNA. An eye-witness also placed him at the scene.
Norwood Officer in Charge Col Phillips said being convicted by a vomit DNA sample was "very unusual". "These days we use hair, blood, cigarette butts, spit, semen, everything to place someone at a crime scene," he said.
"The database (of DNA samples) is getting bigger and bigger, which makes it a lot easier too."
Recent changes to South Australian DNA laws give police the power to take samples from suspects in crimes.
.
Girl, Started Drinking at 12, Had Liver Failure at 14
She started drinking alcohol at the age of 12. One year later, Natasha Farnham was drinking up to six bottles of wine a day.
And even when she was diagnosed with liver failure at the age of 14, Farnham, of Twerton in Bath, Somerset, England, didn’t stop drinking.
In fact, she was rushed to the hospital after drinking 16 bottles of wine, hard cider and other alcoholic beverages over the course of three days.
Now, at the age of 18, Farnham has entered rehab and suffers from permanent memory loss, it is being reported by London’s Daily Mail.
“I didn’t think my drinking was a problem because all my friends were getting wasted every weekend as well,” Farnham told the newspaper. “But, now I have no short-term memory and doctors warn me that if I drink anymore I will die.”
Farnham hopes her story will reach other teenagers who think it is OK to drink alcohol.
The teenager, who dropped out of school at the age of 14, is unemployed. It was only after she was charged with burglary that she decided to enter rehab, she said.
Farnham takes medicine daily to reverse the effects of her failing liver.
.
Ominous Calls To 911 Land Man In Jail
TAMPA - Lawrence Thomas Tucholski called 911 and said Tampa police are useless and that some of them are going to die, police say. Then he called 911 again and said Mayor Pam Iorio should be executed.
Police arrested the 37-year-old Tampa man Sunday night at his home, 506 Lincoln Ave.
He was charged with corruption by threat against a public servant and misuse of the 911 system.
Tucholski told police he made the calls after a domestic dispute and that he didn't intend to harm officers or the mayor, a criminal arrest affidavit states. Tucholski remained in jail today.
.
Stink bomb smashes through ceiling
A family had a narrow escape when a huge block of ice from a plane’s toilet crashed into their home. The TV-sized hunk of waste punched through the ceiling and hit a bed where Peta Simey and baby Jake had just been playing. Shocked Peta, 33, said yesterday: “I heard a massive bang and thought a bomb had gone off.” She said six-month-old Jake often slept in the bed with her and husband Piers, 36, adding: “We could have all died.” The couple has kept the remains of the ice in their freezer.
Posted by The Man at 4/15/2008 No comments: