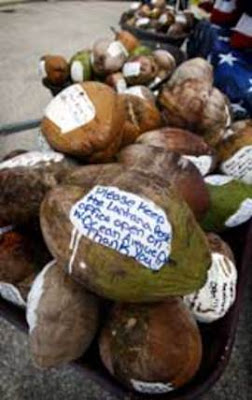 The coconuts are coming, 500 of them, stamped and addressed to your office on L'Enfant Plaza in Washington, D.C.
The bulky brown seeds are serving as postcards, bearing about $4 worth of postage, paid for by post office fans from Lantana and nearby communities, who use the small post office on Ocean Avenue just off Federal Highway.
On the back are polite messages written in marker pens, entreating Potter to reconsider the proposed closing of the Lantana post office, one of three Palm Beach County branches on the chopping block for the fiscally challenged U.S. Postal Service.
Around the nation, 371 stations are being considered for closing, although postal officials have said the final number closed could be around 200.
Besides coconuts, residents have collected more than 5,300 signatures on petitions and filled out public-comment forms left in the post office, which must be returned (no postage required) to the regional postmaster by Oct. 25. About 102 comment forms had been received by this afternoon.
The coconut mailing is no mere goofy publicity stunt. It is a historically based publicity stunt.
.
Posted by The Man at 10/22/2009 No comments:

I tell you my real name, if let me go
A woman stopped for having an open container of alcohol in a public place told police she was from North Carolina and her name was not in the computer, according to her arrest report.
She then gave a name to the Fort Walton Beach Police Officer.
As she was being put in the patrol car, she said, "If I tell you my real name, will you let me go?"
A criminal check revealed that she uses a number of names when dealing with law enforcement officers.
She was charged with providing a false name while detained.
.
'I haven't smoked meth in four days'
Kimberly Smith, 18, and James Moore, 21, were a little too talkative with Bay County Sheriff’s deputies Monday.
Deputies arrived at the couple’s Panama City residence to deal with a dispute over money. But as they were settling that problem, Moore told one of the deputies that he smoked meth about four days ago, officials wrote in an incident report.
After that confession, one of the couple’s neighbors accused them of cooking meth around their baby.
“She is crazy,” Moore replied. “I have not smoked meth for four days.”
Smith agreed telling the deputies that she had not smoked meth in “three or four days,” deputies wrote in an incident report.
That was not much of a defense, the deputies decided, and they got permission to search the couple’s residence. They found a bong with marijuana residue, according to the report, and they then asked Smith and Moore if they would agree to a drug test.
Moore said no.
“I will fail the drug test. I will tell you what I will test positive for,” he added.
.
Man Feeds Young Girls Drug-Laced Ice Cream
Prosecutors say a Kansas City, Mo., man gave sedative-laced ice cream to several young girls and filmed them in pornographic poses while they were unconscious.
James Phillips Edwards was charged Wednesday with advertising, possessing and attempting to distribute child pornography.
Investigators say in court documents that computers seized from the 60-year-old Edwards' home contained pornographic images of at least eight girls. They say one video showed three girls being given drinks and ice cream before they are shown apparently unconscious.
Authorities say all of the girls have been found safe.
.
Driver downs drink as cops arrest him
James Robinson had one more for the road, police said.
After all, they don’t serve hard liquor in jail.
When police caught the 32-year-old Florence man early Monday driving with an open bottle of Smirnoff Vodka, Robinson finished off the final sips as he was being arrested, police said.
That last drink resulted in an additional charge of tampering with evidence. Robinson is facing charges of operating a motor vehicle while intoxicated and having an open container of alcohol.
Springdale police were called to Ventura Court after getting a call that Robinson was trying to break into his former wife’s home. Robinson had fled in a white Toyota by the time officers arrived, setting in motion a search, police said.
Officers pulled Robinson over down the road, quickly noticing “a strong odor of alcohol on his person and bloodshot, glassy eyes,” according to the arrest report.
Robinson failed a field sobriety test, police said.
That’s when he guzzled down the remaining vodka, police said.
PICTURE
.
Posted by The Man at 10/22/2009 No comments:

Labels: In The News, SUCKS, Video's 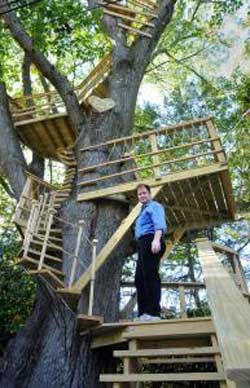 Spiraling around the old oak tree are more than a ton of pressure-treated lumber, some 500 lag screws and nuts, 1,000 feet of jute rope, and 48 feet of rebar.
Atop it all, about 50 feet in the air amid large, golden leaves, sits a copper squirrel fixed on a patina-covered weathervane.
The elaborately designed, four-platform treehouse cost Michael Chapman about $12,000 and just about every waking hour of the past three months. It was a work of love, a childhood dream come true, he said.
Now, after a city inspection and complaints from neighbors - one neighbor allegedly threatened to kill him - his lair in the sky must come down.
If he doesn’t, the city could fine him up to $300 a day.
.
Why didn't he check zoning laws first?
.
Posted by The Man at 10/22/2009 No comments:

"Wii" Bit Too Much Enthusiasm 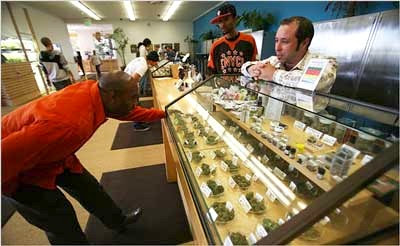 "Do you have a medical condition that necessitates marijuana? Do you have a way with words? If so, Westword wants you to join the ranks as our freelance marijuana-dispensary reviewer."
The local "burgeoning medical marijuana scene" in Denver, Colorado, is growing and the weekly publication Westword wants to be on the forefront, said Joe Tone, the paper's Web editor. "We want someone who can get in and relay to our readers what it is like inside these dispensaries."
It's not exactly like a food critic job. The online-only reviewer won't be showing up anonymously and sampling the wares.
"They are to review the places, not the weed," Tone said.
"We can't have our reviewer be stoned all the time," he quipped.
.
Posted by The Man at 10/22/2009 1 comment:

These things only happen in China 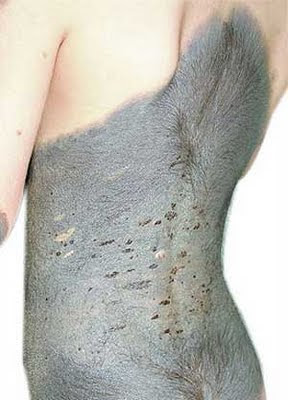 6-year-old girl has baffled medics after her skin apparently turned into boar hide.
Until just a few months ago she had just a small birthmark on her back.
But the hairy hide has grown and grown and now it covers Li Xiaoyuan's entire back and is starting to grow on her arms and face.
The schoolgirl, from Fengkai, southern China, is under near constant medical supervision as doctors try to work out what's wrong.
Her dad Li Yan said: "Doctors told us it was just a birthmark even when it started spreading but now it covers half her body.
"None of the other children want to play with her – they are really mean."
Mum Li Jiang added: "It breaks our hearts to see her suffer like this."
Surgeon Dr Lou Zhongquan believes the youngster may be suffering from a rare hereditary disease that has sent normal moles out of control.
.