Man admits having sex with 1,000 cars

A man who claims to have had sex with 1,000 cars has defended his "romantic" feelings towards vehicles.
. 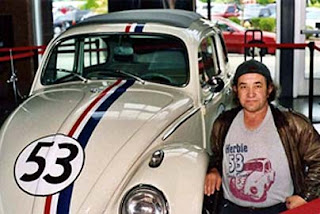 .
Edward Smith, who lives with his current "girlfriend" – a white Volkswagen Beetle named Vanilla, insisted that he was not "sick" and had no desire to change his ways.
He added: "I'm not sick and I don't want to hurt anyone, cars are just my preference."
Mr. Smith, 57, first had sex with a car at the age of 15, and claims he has never been attracted to women or men.
.
Posted by The Man at 5/20/2011 No comments:

Man found $45,000 in cash in his new home
When Josh Ferrin closed on his family's first home, he never thought he'd make the discovery of a lifetime -- then give it back.
Ferrin picked up the keys earlier this week and decided to check out the house in a suburb.
As he walked into the garage, a piece of cloth clinging to an attic door caught his eye. Inside, he found eight boxes full of cash -- about $45,000.
Ferrin says he thought about everything he could do with the money, but knew he had to give it back. And that's exactly what he did.
He called the previous owner's son and returned the money. That man says he knew his father had stored cash in the home but never imagined it was that much.
.

Teacher accused of peeing in classroom
A substitute teacher at in is charged with child molestation after students said he urinated into a trash can inside a classroom.
The teacher, 60-year-old Coleman Eaton Jr., was being held without bond Thursday in the Clayton County Jail.
Riverdale police Major Greg Barney says Eaton reportedly walked to the back of the class on Wednesday, told the fourth-graders not to turn around and urinated into a garbage can. He says one of the students went to the school office and made a complaint.
Barney says officers went to the school and interviewed the students and Eaton, then placed him under arrest.
.

2 men steals 12 tons of snails
Two men , were arrested in northern in connection with the theft of 12 tons of snails, police said.
The two men allegedly broke into a warehouse in Wegry and stole the snails, estimated to be worth about $6,530.
The men were detained by police after they sold a portion of their catch - about 2.5 tons - to a buyer in nearby Malbork.
The 28-year-old and 33 year-old face up to 10 years in prison if convicted.
.

Kindergartner takes heroin to school
Police and school officials in western say a kindergarten student brought stamped bags of heroin to a school and may have given some to other students.
Investigators said the 7-year-old brought the drugs to . Officials say teachers found 18 white packets with a stamp of a bunny coming out of a hat, which kids are calling "the magic ticket."
Police spokesperson Diane Richard said the boy didn't know what the substance was. Officials say the boy told police he gave the small bags to three friends.
Richard says one parent has returned a stamp bag to the school, and any parent who finds one should call 911. She says police are investigating how the boy got the drugs.
.

Man Caught With Pants Down Behind Soda Machine
police said while they were responding to a shoplifting call at a metro grocery store, a man was caught with his pants down behind a soda machine.
Police arrested 31-year-old Marshall David Osbrone on indecent exposure charges after someone alerted police to a man touching himself behind a soda machine at the store's entrance.
The person told police they saw a pair of legs sticking out from behind a soda machine, according to the police report.
When police went to investigate, they said, Osbrone had his pants down to his ankles touching himself.
Police arrested and handcuffed, and took him to the Oklahoma County Jail.
When police went to process the shoplifter at the jail, the officer returned to find Osbrone with his pants down and touching himself, all while handcuffed to the bench, the police report stated. Police added another charge of indecent exposure to Osbrone's arrest.
.

Chewing gum found on Tesco pizza
A boy has been put off Italian food for life after biting into a Tesco pizza and discovering a half-eaten piece of chewing gum.
Mother-of-three Jamie Fowler, aged 30, said she already struggled for what to cook her 13-year-old son Callum, who has cystic fibrosis and needs a diet rich in fat, salt and calories.
But now his favorite dish is off the menu after he nearly swallowed the masticated gum.
“I think it’s disgusting,” said Jamie, who is a full-time carer. “I’d cut the pizza in half and given half to Callum and half to my other son Ollie.
“I was upstairs when Callum shouted up, ‘Mom, there’s something on my pizza.’
“I came downstairs and I couldn’t believe it when I saw it. It was a chewed up piece of gum. It’s disgraceful.
“Obviously the person making the pizza was munching away and it fell out of their mouth. I can’t believe they just left it there. “Callum said he’ll never eat another pizza. Just the thought of it makes him ill.”
.
Posted by The Man at 5/20/2011 No comments: