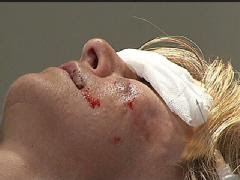 A Calif. woman was recovering following corrective surgery after she attempted to perform plastic surgery on her own face.
Her doctor said the tough economy and the easy availability of supplies online has caused an uptick in the potentially disfiguring practice.
The woman, is 54, a mother of three, with a career in the public eye. She said that after a visit to a plastic surgeon, she went online and bought a vial of liquid silicone for $10 then injected it into her lips and cheek four weeks ago.
"Insane. I can't believe I did what I did," she said. "I thought I was going to be happy with the results, then the next day, my face became very inflamed, very red, swollen."
.
Video: Woman Tries Surgery On Own Face
.
Posted by The Man at 7/04/2009 No comments:

Having a Happy 4th of July 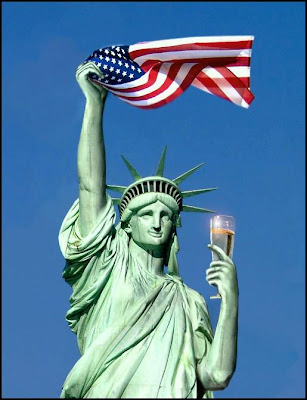 It was a case of double vision when a set of identical twin brothers married another pair of twin sisters in a military ceremony in Pechora, north Russia.
.
.
Posted by The Man at 7/04/2009 No comments: