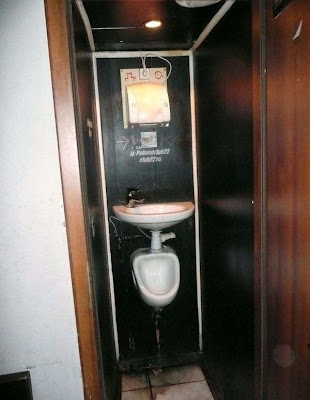 .
Anonymous said...
Could be worse. Could be the other way around!
.
Who knows they could recycle? (Gross)
.
Anon Y. Mous said...
It's the All-in-One model. Just needs an electric razor.
.
Tim said...
I can multi-task--relieve my bladder and wash my hands at the same time.
.
I doubt it was made for multi-tasking.
It could be limited space or they are conserving water.
.
Posted by The Man at 3/05/2009 No comments:

Man refuses to take off clothes at sex party

A man that who refused to take his clothes off at a swinger sex party has been blamed for a "riot" at a north Queensland nudist colony.
Police were called amid threats of violence and lewd behavior and ordered the Brisbane man and his wife from the adults-only "anything goes" sex party.The White Cockatoo resort at Mossman, near Port Douglas, is promoting swingers and sex parties in a month of hedonism for March in a bid to boost sagging tourism figures.
John Harrison and his wife Lyn arrived at the White Cockatoo on Sunday for a week's stay at the month-long sex party.
Once billed as the nation's top group-sex hotspot for swingers, the resort made international headlines last year when plans to lift a self-imposed swinger ban were reported.Owner Tony Fox said the "riot" erupted when four naked female guests protested when confronted by the fully-clothed man. "They felt uncomfortable with him eyeing them off and I asked him to show some respect and take his clothes off," said the nudist colony manager.
.
Tattoo Jim said...
Boost sagging tourism??? Well, there you go... maybe his "little tourist" was sagging so he wanted to leave his clothes on.
.
Posted by The Man at 3/05/2009 No comments:

Beware of the Monkeys

Here is a clip of what those monkeys do with all that stuff they rip off your car
.
Tattoo Jim said...
Damn that was funny!!
.
BlackCrypt said...
At least the monkeys are smart enough to have license plates for their car!
.
Posted by The Man at 3/05/2009 No comments:

.
Tattoo Jim said...
This was brought to you by you local fast food diners.
God help America.
.
Don't forget the Lazy Ass Exercise Club.
.
Posted by The Man at 3/05/2009 No comments:

.
DUI-Insider said...
Wow! My favorite is the last guy with the tape measure. That's funny but very sad.
Getting arrested for DUI is serious business. Penalties are getting heavier in many states.
I hope these people get the treatment and help they need.
.
Tattoo Jim said...
You gotta admit, there's not much that's any funnier than a drunk... as long as no one else gets hurt, have at it you loser's.
.
The problem is that to many innocent victims gets hurt or killed.
.
Posted by The Man at 3/05/2009 No comments: