Bodypaint gets girls kicked out of football game 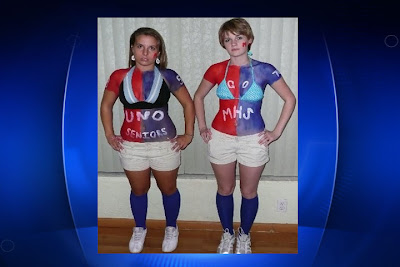 Manatee High School says two of its students were caught showing too much of their school spirit. The girls have now made national news for getting kicked-out of their school's homecoming game.
Monica Cummings and Jessyca Altenbach are both seniors at Manatee High. They have almost perfect grade point averages, and they're very active in school activities.
They've never been in any trouble before.
They say last Friday they decided to paint their bodies in school colors when Manatee High took on Riverview at homecoming. To support their undefeated team, and show their school spirit.
And they were shocked to find themselves booted out of the game by the principal.
Although the girls say they asked the school resource officer for permission before the game, the school board says they were told to go to the principal and ask him.
And officials say several parents came to them and requested that the girls be asked to leave because their dress was not appropriate with little children around.
School spokesperson Margi Nanney says that the girls were given several chances to put shirts on before they were kicked out. She also says that the bikini tops they are wearing in the photos are not the ones they were wearing at the game. They were wearing tops painted the same color as the rest of their body, so they looked like they weren't wearing any tops.
Some say that the way the girls were dressed is no different than the way many boys paint their bodies at football games.
.
woosh said...
Me and a bunch of my girlfriends just did this and our principal made us wear shirts over their sports bras. It was fine because they pulled up the shirts and tied them so only their stomachs were showing. Those girls are dumb cause they were given warnings!
Posted by The Man at 10/21/2007 No comments:

Labels: In The News, Pictures, Sports

How to survive a tiger attack

You never know, this could save your life one day.

Don't worry it will be there tomorrow 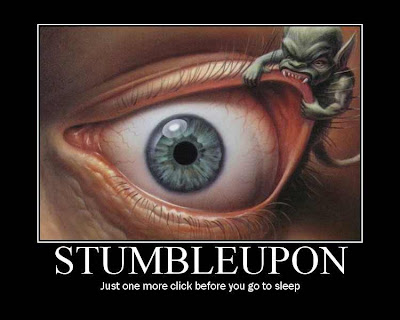 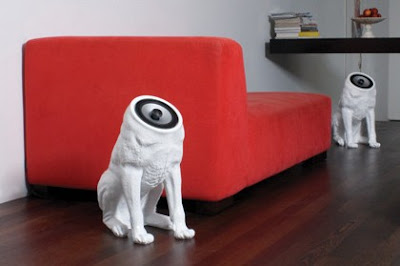 The "Woofer" is a co-axial speaker system consisting of two dogs. 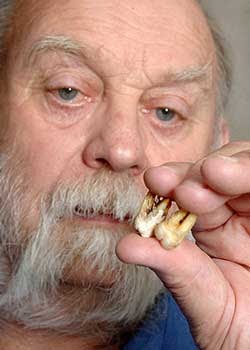 The DIY Dentist
A man pulled out six of his own teeth rather than wait three weeks for an NHS appointment or pay hundreds of pounds to go private. Taxi driver Arthur Haupt took the drastic DIY action using a technique learned in the Army because he was in so much pain. Mr Haupt pulled his teeth out trying to see a dentist at the ADP NHS dental practice, in Asfordby Road, Melton. Despite being in agony, staff said he would need to fill in a form and go back in about three weeks' time.
When he tried a private dentist nearby, he was quoted £75 for each of the six teeth he wanted out. The same procedure costs £43.60 per tooth on the NHS. Mr Haupt, 67, said: "I went home, got the pliers out and did it myself. I pulled one tooth out and all this black stuff came from underneath it, but within an hour my headache had gone. "I pulled the others out over the next couple of weeks. There's a bit of pain at first, but it was nothing like the pain I was in when I first went to the dentist."


One-eyed deaf driver, 82, tows trailer at 88mph
A one-eyed deaf 82-year-old was caught pulling a trailer at 88mph on one of Scotland's deadliest roads. Maurice Hollyfield told a court he wasn't paying attention because he had his stereo turned up loud so he could hear the music. He also claimed he thought his car's rpm counter was the speedometer.Hollyfield, whose left eye is made of glass, was clocked by a speed camera on the A9 at Waterloo between Perth and Dunkeld. He should only have been doing 50mph. A doctor told the court Hollyfield was fit to drive, but Sheriff Fiona Tait said: "His health raises concerns about public safety." She told Hollyfield he faces a ban when he is sentenced next month.

Beer bottle removed from man's colon
Doctors in central Kenya have successfully removed an empty half-liter beer bottle from a man's colon, but how it got there remains a mystery. The 26-centimetre bottle was removed on Monday from the colon of the 33-year-old man after two operations in a Kiambu District Hospital, about 20 kilometers from the capital. "The first operation was not successful, forcing us to perform the a second one, which went fine," said the hospital's administrator Patrick Okoth.Although the man, whose identity was not disclosed, said he had pushed the bottle through his rectum, Okoth said it was nearly impossible for the man to have done that by himself. "It would have been too painful. He would have had to use a whole length of his arm," Okoth said, adding that the bottle inflicted "no damage at all" in the man's internal organs. Instead, Okoth said the man could have been assaulted by other people but that it was to embarrassing for him accept that. Hospital authorities refused to allow the patient to be interviewed, citing patient-doctor confidentiality.

Police: Student Uses Pen, Gun Powder To Make Pipe Bomb
CLERMONT, Fla. -- A student at a Seminole County high school was arrested for allegedly making a pipe bomb out of a pen and investigators also say he made threats against his school.
If a teacher saw a Sharpie marker, she probably would think nothing of it. But this particular one had been filled with gunpowder and a fuse was attached. If it weren't for a text message the student sent, deputies may not have known about the very dangerous plot.
Michael Drnek, 16, is now facing felony charges for turning the Sharpie marker into a small bomb.
"It contained a large amount of gun powder and a fuse," explained
Deputies found the explosive pen inside Drnek's bedroom at his Clermont home on Thursday. It was locked in a little black safe, along with several smoke bombs. Drnek's father gave detectives a container of gunpowder he caught his son with days ago.
Investigators said Drnek sent another student at PACE-Brantley Hall School in Longwood a text message and picture of the device with the warning he was going to attack the school.
"The child who received the text message, his mother was looking at the text. She intercepted the message and then notified the Seminole County Sheriff's Office," Sgt. John Herrell, Lake County Sheriff's Office.
"Last person I would think of," said next door neighbor Judy Brown, who hired Drnek to do yard work and never imagined he'd be accused of bomb making. "He's a nice boy, never had any trouble with him. He's very polite."
PACE-Brantley Hall is a school for students with learning differences. Friday, officials gave each parent picking up their kids a letter describing what happened.
Drnek is being held in the juvenile detention center in Ocala. He's charged with possession of a destructive device with intent to do harm.
Posted by The Man at 10/21/2007 No comments: