Cops in the News

Cop accused of sex with prostitute in squad car
Detroit Police are investigating allegations that an on-duty officer had sex in his squad car with a prostitute, officials said Friday.
Details were scarce, but police said internal affairs investigators are looking into the allegations that the officer engaged in sex acts with the prostitute in his police cruiser two weeks ago while it was parked somewhere in the Northeastern District. The officer is assigned to the department's Western District, police said.
. 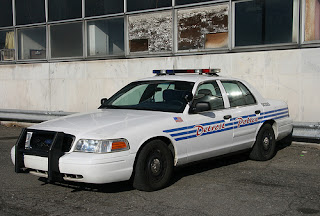 .
The officer was on duty when other officers approached the car and found him engaged in sexual activity, police said.
"Right now the officer is suspended with pay," said Officer Dan Donakowski, a police department spokesperson. "It is under investigation."
The Board of Police Commissioners, which has civilian oversight over officers, is aware of the allegations.
The Rev. Jerome Warfield, the police commission's chairman, said a cop having sex with a prostitute "certainly could lead to termination."
Police spokesperson Sgt. Eren Stephens said Chief Ralph Godbee Jr. will seek to have the officer's pay suspended while the issue is investigated.
.

Police dog 'Fired' after biting jogger
Authorities in say one of their police dogs has been demoted to house pet after attacking a jogger near its handler's home in this week.
The 52-year-old woman required 30 stitches after the incident Monday night, and the German shepherd named McGee has been placed on 14-day quarantine.
police also apologized to the jogger and took McGee off the job permanently.
Police say a sergeant was putting McGee into his cruiser when the dog ran after the passing jogger and bit her leg, arm and wrist. The sergeant pulled the dog off the woman, whose injuries were not life-threatening.
Stamford Police Chief Robert Nivakoff said McGee also had previously nipped a delivery worker at the sergeant's home, although no formal complaints were filed in that case.
.

Officer asleep at the wheel
Cedar Rapids Iowa Police are investigating a photograph obtained by an anti-tax activist that appears to show an officer sleeping in his squad car.
. 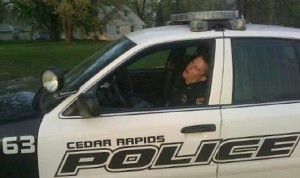 .
Tim Pugh, who helped organize opposition to a sales tax referendum last week, said he was forwarded the photograph by a friend. Pugh said the photo was taken on the city's southwest side by another individual who wishes to remain anonymous because he fears retaliation.
Pugh e-mailed the photograph to police and media outlets, complaining about what he called a waste of tax dollars.
Sgt. Cristy Hamblin says the investigation so far has not yet been able to determine whether the photo is authentic. She says investigators are trying to determine whether an officer was involved and should face any discipline.
VIDEO
.
Posted by The Man at 5/14/2011 1 comment:

Crooks that fled with a haul of stolen sausages, beer and cigarettes are facing 10 years in jail - after stashing the loot inside a grave.
. 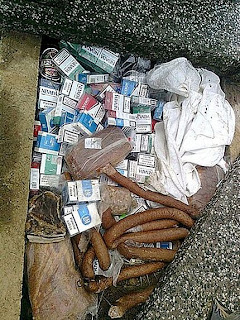 Click to Enlarge
Thief Krystof Dzielekci, 35, and his 59-year-old father Leon lifted the marble lid on his grandfather's tomb to find what he thought was the ultimate hiding place.
The pair were caught the next day when security staff at the cemetery in Zyznowa, Poland, reviewed the night's CCTV tapes and saw them digging up the grave.
"It was a good hiding place, but you'd have to be pretty hungry to want to eat any sausage once it's been down there with your grandfather's body," a police spokesman said.
.
Posted by The Man at 5/14/2011 No comments:

An Italian bus driver shocked passengers by using two cell phones at the wheel while he steered with his elbows. The driver took out the two devices and began casually chatting away as he transported travelers to Rome's Ciampino.
A quick-thinking passenger turned the tables on the driver, however, by capturing his antics on film.
.

.
The driver had been "suspended pending disciplinary proceedings" by Italian bus firm Cotral, quoting regional transport chief, Francesco Lollobrigida.
Using even one mobile phone while driving is illegal in Italy.
Lazio governor Renata Polverini condemned the driver's actions as "unacceptable and reckless".
"People who are responsible for the safety of others must not behave like that," she told reporters, amid calls to have him sacked (FIRED).
.
Posted by The Man at 5/14/2011 No comments:

.
Four people were arrested at a North Houston car wash where, in addition to washes and waxes, illegal drugs and raccoon meat were sold, police said.
Undercover officers said they went inside the full-service car wash located in the 4300 block of Yale and were able to purchase marijuana, prescription drugs and liquor.
HPD's deferential response team raided the business after receiving complaints from neighbors.
Police said they found two weapons and more than 1,000 prescription pills. Police checked the serial numbers of the two guns, and a 12-gauge came back reported stolen.
In addition to that, investigators said illegal gambling was taking place. There were two dominoes tables set up. Undercover officers who went into the business earlier in the day said there was high-stakes gambling going on inside a shed in the back.
The owner Michael Maxwell said its all lies.
“I don't know why they are here. They don't have a warrant. They come storming into my place,” Maxwell said. “I got all my permits that go with this place. I am licensed with the city. I pay my taxes. This is my property and it is private.”
.
Posted by The Man at 5/14/2011 1 comment: