'Skinny' house for sale for $4.3 million

A house dubbed City's "skinniest" is on the market with a hefty price tag: $4.3 million.
The town house at 75 ½ Bedford Street in the has been home to the poet Edna St. Vincent Millay, the anthropologist Margaret Mead and the actor Cary Grant.
. 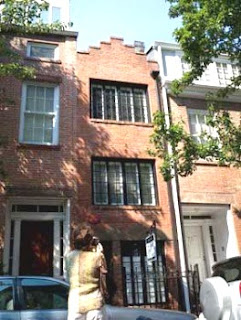 .
It measures just 9 ½ feet wide, has three-bedrooms, four fireplaces and a lush back yard. It was built in 1873. Broker Bo Poulsen at Town Residential says the last buyer paid $2.1 million for the building in 2009 and put in a million-dollar renovation. The kitchen has Italian marble counters and the master bath opens to a balcony overlooking the garden.
.
Posted by The Man at 5/26/2011 No comments:

Inmate had to crawl from jail after release
Authorities in Multnomah County is investigating the case of a disabled inmate who wound up crawling from the downtown Portland jail when he was released because his wheelchair could not be located.
Sheriff's deputy Mike Shults says this has to be the first "for anyone to crawl out of our custody."
police arrested 37-year-old Scott Hamilton on Sunday evening for sitting in his wheelchair, drinking a beer on public property. He was sought on an earlier arrest warrant for the same offense so officers drove him to the jail, giving him a receipt for the wheelchair
When he was released early Monday, his wheelchair was nowhere to be found. wound up scooting on his butt out through the jail lobby doors.
Police spokesman Pete Simpson says the wheelchair was eventually located at the police property warehouse.
.

Thieves make off with $1.6 million in wine
Scotland Yard is searching for $1.6 million worth of vintage wine stolen from an east warehouse.
Police say thieves disabled alarms and security cameras before breaking into the warehouse on Sunday and using a forklift to load up about 400 cases of the precious cargo.
Some of the stolen wine belonged to private investors, one of whom has offered a $7,200 reward for the return of the stolen stock.
Police appealed to the public for information, saying the stolen wine is rare and valuable and could be sold to private collectors or auction houses.
Six men were seen with what police said they believe are the three getaway vehicles. Police said two men have been arrested in connection with the burglary.
.

Man dropped ring down toilet gets it back
A 90-year-old man who accidentally dropped his commemorative high school ring down a lavatory in 1938 has been reunited with it after 73 years. The ring was found 200 miles away in a sewer by a sanitation worker who happened to have gone to the same school and recognized it.
Jesse Mattos had dropped the ring, which bore his initials JTM and the year of his graduation, into a toilet in a butcher's shop where he was working when a high school student in .
Tony Congi, 52, a sanitation worker who graduated from the same high school in 1976, found the piece of jewelry in the sewer system and recognized it immediately.
He had the ring cleaned and then looked at the 1938 year book, discovering there was only one person with the initials on it. He returned the ring to Mr. Mattos
.
Posted by The Man at 5/26/2011 No comments:

Duncan Zuur is the last person you will find on the boring morning commute - not content with hurtling along the water being towed by a boat; he hooked himself to a train for his latest stunt.
.

Click to Enlarge
The Flying Dutchman hit 70mph while Mr. Zuur being pulled along on in and claims to be the first person to achieve the feat.
Mr. Zuur, from , showed off jumps and tricks while being dragged along, saying afterwards: ‘I was full of adrenaline. If I have the opportunity, I would do it again.’
. 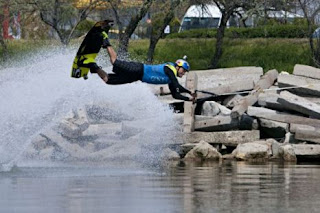 Click to Enlarge
Rail officials gave the 36-year-old permission to perform the stunt but his team pointed out ‘it’s not as easy to stop a train if anything goes wrong’.
.
Posted by The Man at 5/26/2011 No comments: