Canon Employees Are Forbidden to Sit Down, Walk at Normal Pace 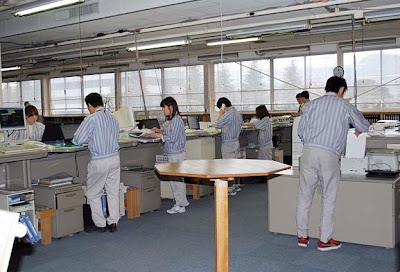 You might think your job sucks, but at least your boss wasn't insane enough to remove all the chairs and install security so an alarm goes off if you don't walk fast enough.
The president of Canon Electronics, Hisashi Sakamaki, is also the author of a book proposing some of the same measures he takes with his own company. His theory is that forcing employees to stand not only saves money but increases productivity and enhances employee relationships.
In the hallway, if an employee walks slower than 5 meters every 3.6 seconds, an alarm and flashing lights are set off, reminding the poor startled worker that he's an inefficient waste of air. Even better (or worse), there's a sign on the floor in said hallways that reads, "Let's rush: If we don't, the company and world will perish." The big boss, as a reward for thinking up all this stuff, gets to lounge in a nice, relaxing chair.
.
Posted by The Man at 6/04/2009 3 comments:

A lesson from Gillette in how to shave your balls 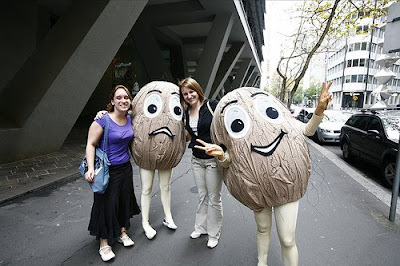 .
This can't be for real. Can it?
Gillette wants men to shave their balls?!
This is their rationale: "When there is no underbrush... the tree looks taller?!"
Did Doctor Evil infiltrate their company? WTF? Watch it for yourself.
.
.
Posted by The Man at 6/04/2009 1 comment:

Washing powder and fabric conditioner in one... 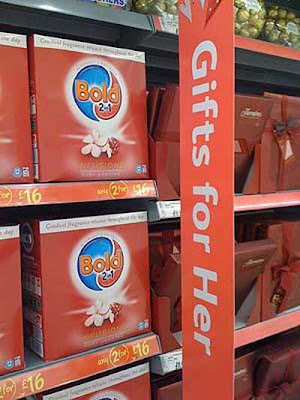 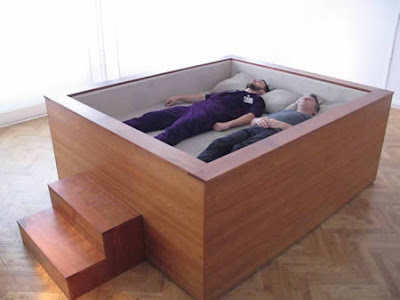 The sonic bed is a king-size bed with 12-channel surround sound. It may look like a wooden tank from the outside, but inside its got enough speakers to dwarf any home theater set up. Created by Kaffe Matthews as a museum exhibit, the bed covers every inch of your body in sound.
.
Posted by The Man at 6/04/2009 No comments:

Lawyer: It Wasn't Murder, It Was the Spray Tan
A defense attorney has suggested that a spray tan might be to blame for the death of a 33-year-old South Florida woman whose husband is now facing a second-degree murder charge.
Prosecutors believe 36-year-old Aventura developer Adam Kaufman strangled his wife, Eleonora Kaufman, in November 2007. But during a bond hearing Tuesday, defense attorney Bill Matthewman floated a different theory.
Matthewman said arsenic or some other accidental poison in a spray tan might be to blame for Eleonora Kaufman's death. Matthewman asked Miami-Dade chief medical examiner Dr. Bruce A. Hyma if officials investigated adverse reactions to spray tans.
Eleonora Kaufman got a spray tan one day before she died.
.
Daggering is just crazy
An erotic dance craze sweeping Jamaica has been blamed for a number of pelvic injuries and now faces a government crackdown.
"Daggering," a lewd dance style where couples simulate dry sex in various positions to the beat of the music, is characterized by over-the-top gyrating, heavy pelvis-thrusting and daredevil leaps.
Many couples have taken the "rough" daggering dance from the club to the bedroom, with disastrous consequences. Jamaican doctors were prompted to issue a warning on the dangers of daggering when presented with a range of fractured penises caused by rough intercourse.The number of cases tripled in the last year.
The rising popularity of the new dance — and subsequent public protests — has prompted the Jamaican government to ban songs and videos with blatantly sexual content. The videos have been making the rounds on YouTube and other video-sharing sites.
Jamaica’s Broadcasting Commission defines daggering as a "colloquial term used in dance hall culture as a reference to hardcore sex, or what is popularly referred to as 'dry sex,' or the activities of persons engaged in the public simulation of various sexual acts and positions."
.
Jamaican rasta "FAILS" trying to do the dance "Daggering."
.
.
Mom Puts Poop in Daughter's Feeding Tube
A woman in Austin Texas has been accused of repeatedly smearing human waste on her 3-year-old daughter's intravenous feeding line, potentially causing life-threatening infections.
Emily Beth McDonald, 23, of Austin, was charged with felony injury to a child. She faces up to life in prison if convicted.
According to an arrest affidavit, a surveillance video at Dell Children's Medical Center captured McDonald on Sunday placing feces from a soiled diaper on the cap of a tube with a direct link to her child's bloodstream.
According to the affidavit, police interviewed McDonald, who allegedly confessed and said she knew that her actions could make the child severely ill and possibly even kill her. No motive was disclosed.
.
Person who Rape of Girl, 11, Badly Beaten by Furious Neighbors
A person of interest in the horrifying rape of an 11-year-old girl on her way to school in Philadelphia was severely beaten by angry neighbors — and the attack was caught on camera.
Jose Carrasquillo, 26, is currently in stable condition after the videotaped beating by about a dozen West Kensington residents, according to police.
The mob pummeled Carrasquillo for several minutes with wooden sticks, their fists and their feet, authorities said.
He suffered head injuries and was taken to Temple University Hospital. Police said Wednesday that he has been upgraded from critical to stable condition.
Carrasquillo hasn't been charged in the rape, which happened as the girl walked to school Monday, but he has been arrested on an unrelated warrant, according to investigators.
Police described Carrasquillo as a "person of interest" in the case and asked the public for help in finding him.
The assault happened Tuesday after neighbors recognized Carrasquillo from a photo distributed by police.
VIDEO
.
Updated 6-5
Angry Neighbors Won't Be Charged in Beating of Suspect
A mob of furious neighbors of an 11-year-old girl raped on her way to school in Philadelphia won't be charged for beating a man wanted for questioning in the case.
Philadelphia Police Commissioner Charles Ramsey said Thursday that no charges will be filed against the group of about a dozen residents of the city's West Kensington section who attacked 26-year-old Jose Carrasquillo.
Carrasquillo hasn't been charged with rape but was arrested on an unrelated warrant. Ramsey said investigators have forensic evidence and witness identification placing him at the scene of Monday's attack.
Carrasquillo was released from the hospital into police custody Thursday afternoon after being treated for head injuries. The girl also has been released from the hospital.
Ramsey said he made the decision not to charge the residents based on the severity of the man's injuries. He also factored in the neighbors' intent and the high level of emotion in the community. But, he added, he doesn't condone violence.
PICTURE
.
Police find suitcases made of cocaine
Police say two suitcases carried by a woman who was about to fly from Santiago, Chile to Spain were made of cocaine.
Detective Leandro Morales at the Santiago airport says the drug "was not hidden in the luggage — this time the suitcases were the drug."
Morales tells The Associated Press that the suitcases were made of a substance combining cocaine with resin and glass fibre.
He said a "chemical process" could be used to separate out the drug.
The officer says the suitcases were heavier than their contents.
The 26-year-old Argentine woman was arrested.
.
Posted by The Man at 6/04/2009 1 comment: