Bomb squad deployed to defuse vibrating sex toy
A Russian bomb squad was called out to defuse a bomb. The crack team of bomb experts was called out to a post office in Petrozavodsk after receiving a call from a postal worker who had encountered a suspicious parcel emitting a ticking sound.
The building was roped off by the security forces and people were evacuated.
‘In the package, the bomb squad found a vibrator.’
Having been identified as erotic rather than explosive, the package will now be returned to the post office before being sent to its intended recipient.
'Nine times out of ten it's an electric razor, but every once in a while... it's a dildo.'
.
Man arrested for theft of "Dildos"
Florida Keys man, Mitchell Tice 40, was arrested last night and charged with stealing a box of sex toys.
Tice, a breakfast cook, allegedly swiped the items after breaking into a utility trailer owned by a couple for whom he then worked. Tice also allegedly took two laptop computers, according to a Monroe County Sheriff’s Office..
Tice was linked to the theft after his girlfriend, Pshantel Scott, told detectives that he “had placed a bag of dildo’s (sex toys) under their bed.” Scott, 38, added that Tice told her he stole the sex toys “from his boss’s trailer.”
Scott turned over the items, which “were placed into property.” The sex toys were later shown to the restaurant owners, who “positively identified the items as theirs.”
.
Female Cop Rejects Man's Persistent Sex Bribe
A female cop pulled over Adam Yarbrough for driving his moped erratically on an Indiana Interstate. He allegedly tried to bribe the officer with $5, a kiss, and the promise of having sex with her. Officer Christin Rudell turned down the three-pronged offer.
After Rudell, ticketed him for several vehicular infractions, Yarbrough said, "How about we call it even” I give you five dollars and you just get rid of this ticket and let me go?
Though Rudell explained that “there would be no exchange and that he needed to take the citation,” Yarbrough persisted. Yarbrough said, “OK if you won't take the money how about I give you a kiss? And well I haven't had sex in a while so how about we do that?"
Rudell then arrested Yarbrough for “Felony Bribery.”
Yarbrough “continued to make sexually explicit remarks” and yell profanities, Rudell noted, adding that she asked him several times to lower his voice. When he refused to comply with the cop “disorderly conduct charges were added.”
.
Man shows 2 IDs to rob a bank
Texas bank robber who abided by a teller's request to provide two forms of identification before she could give him money is going to prison.
A judge sentenced 49-year-old Nathan Wayne Pugh of more than eight years.
Pugh tried to hold up a Dallas Wells Fargo Bank in July. The teller stalled Pugh by telling him she needed to see two forms of ID. Pugh showed her his Wells Fargo debit card and a state ID card. He was captured as he tried to flee with $800.
.
Posted by The Man at 3/16/2011 2 comments:

Did you know “Your Cocaine May Have Been…….?” 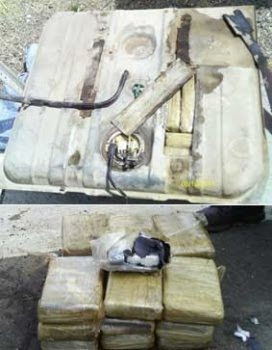 In A Cars Gas Tank
Nearly 50 pounds of cocaine with an estimated street value of more than $1.4 million were found in a car's gas tank at a southern Arizona border checkpoint.
During a search of the vehicle at an I-19 checkpoint north of Nogales on March 10, officers found 19 bundles of cocaine inside the gas tank, which had been modified with a trap door. A canine team initially had detected the drugs, according to U.S. Customs and Border Protection.
The driver, who has not yet been identified, was taken into custody.
.
Up Your Dealer's Butt
That crack you’re smoking was likely secreted at some point in a dealer’s ass.
Marcel Foster, 23, was arrested following a traffic stop in South Carolina. According to a Spartanburg County Sheriff’s Office report, a deputy spotted a “leafy substance” on the floor of Foster’s car. He also detected a “strong odor of cologne.”
A subsequent check of the vehicle turned up two bags of marijuana, while a search of Foster yielded $1757 in his pants pocket. Foster was arrested, handcuffed, and transferred to the county detention facility.
At the lockup, Foster was "Strip Searched" and jailers found a large white rock like substance inside of a clear bag in his butt which is a favored storage place for street dealers.
.
Posted by The Man at 3/16/2011 No comments: