Completion nears of the commode-shaped house 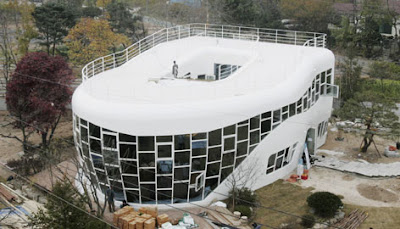 SUWON, South Korea — Sim Jae-duck has made his political career as South Korea's Mr. Toilet by beautifying public restrooms. Now he's got a home befitting his title: a toilet-shaped domicile complete with the latest in lavatory luxury.
Sim is building the two-story house set to be finished Sunday to commemorate the inaugural meeting later this month of the World Toilet Association. The group, supported by the South Korean government, aims no less than to launch a "toilet revolution," by getting people to open their bathroom doors for the sake of improving worldwide hygiene.
The bathroom emerges into a spacious living room featuring a grand staircase and lined by windows curving around the rounded facade of the building.
The home has four bathrooms that include a whirlpool bathtub, urinals and large glass showers. 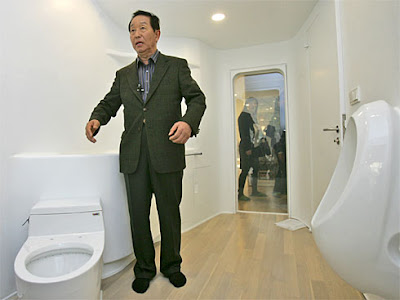 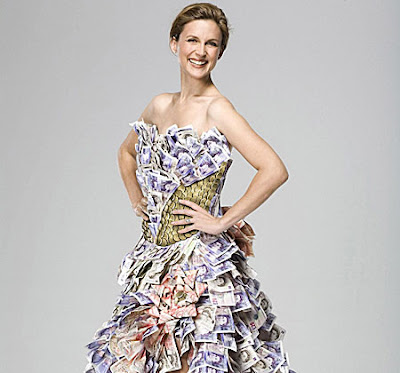 Newsreader Katie Derham poses in a £50,000 dress made of money to launch a lottery show.

The People's £50 Million Lottery Giveaway will pit worthy causes against each other in a public vote.

Environmental projects must prove they deserve to win £50million. 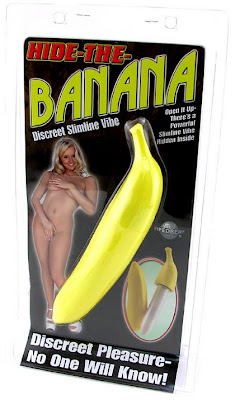 “Killacycle” 0 to 60 in 1 second sets a world record at the drag races.

13-year-old living alone.
A 13-year-old girl has been left to raise herself alone in a Sydney apartment following the death of her father. The NSW Department of Community Services has allowed the year 8 student to stay in the community housing apartment on her own for almost four weeks. But DoCS - which claims to have offered the teenager financial assistance to buy groceries - has given the teenage girl just $50 over the past month.
Her parents separated more than a decade ago and she has seen her mother only a handful of times since. Her father died in hospital last month. Amber has allegedly repeatedly refused offers from the Department of Community Services (DoCS) to live with her mother or stepfather. » Full article here

Armed With Flowers, Robbers Steal Couple's Savings
Robbers posed as flower deliverymen to get into an 80-year-old woman's apartment and steal at least $60,000 in savings her husband kept in cash, the victims and police said.
Two bouquet-toting bandits persuaded Carmen Nieves to open her door to them; she said Saturday as police released a surveillance camera photo of the suspects.
Click Here To Read More

Man forgets car at gas station
BERLIN (Reuters) - A German man forgot his car after filling it up at a petrol station, police said Friday.
"He just forgot about it and walked off home," said a spokesman for police in the western city of Wuppertal.
After the car had sat blocking the pump for about an hour, a woman working at the petrol station became suspicious and alerted authorities.
Officers contacted the 63-year-old from Remscheid, who came straight back to fetch the vehicle. He had paid to fill up the car before walking off.

Cleveland Offers $100 Gas Cards for Guns
CLEVELAND (AP) - Armed residents can give up their guns and get gasoline cards worth $100 at the pump. The first 450 people who show up at Cleveland's convention center Saturday and surrender a working handgun will receive a card.
Police, who will be at the center to ensure the guns are turned in safely, asked for the weapons to be brought in unloaded and in a clear plastic bag.
The city has recorded 119 homicides so far this year - the same number for all of 2006.
Gasoline prices have surged in recent weeks, with the statewide average for a gallon of regular gas at $3.07 last weekend, 25 cents more than Oct. 22.

Fla. man jailed for jaywalking
BRADENTON, Fla. - A man was in jail Saturday after refusing to sign a $15 jaywalking ticket two days earlier.
Leroy Franklin Cladd Jr. was cited for not using a crosswalk late Thursday night. He balked at signing the ticket, a misdemeanor that landed him in jail. He was not under the influence of drugs or alcohol at the time, police said.
Cladd was being held at the Manatee County jail on $250 bond.
Posted by The Man at 11/12/2007 No comments: