Children at The Green Way Primary, in 21st Avenue, have complained to teachers about the grown-ups' language.
. 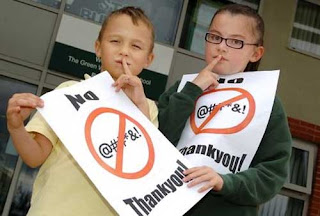 .
Now, pupils are designing their own eye-catching posters in a bid to shame the offenders.
Simon Bush, deputy head teacher of the school, said it was important the problem is tackled swiftly.
He said: "During a school council meeting a Year 6 boy said, 'We are very concerned about the amount of swearing on the playground.'
"I thought he meant other children's language but he was actually talking about the parents."
Mr. Bush stressed it is only a "very small minority" of parents who are guilty of using bad language in earshot of pupils.
However, he said the school is determined to eradicate it.
Mr. Bush said: "It is not a massive problem, but there are some parents who do use inappropriate language while picking up their children.
.
Posted by The Man at 6/12/2011 No comments:

School children gets compensated over mostly scrapes and bruises

A schoolboy who fell over and cut his knee in a PE class was awarded more than £2,500 compensation and a schoolgirl injured in a game of Frisbee received an £879 payout.
The claims were part of a £57,000 compensation bill footed by Rotherham Council for mishaps and lost property at schools in the borough in the last five years.
. 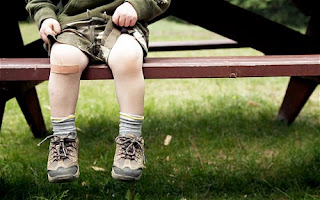 .
A girl who fell down concrete steps on a tricycle got £6,250, another girl who broke her wrist on a trampoline won £1,092, while one girl who tripped on anti-slip felting was awarded £1,003.
In another case, a schoolboy received £5,750 when he sued a school after being splashed with custard when he was bumped into by a fellow student.
Records released under the Freedom of Information Act said: “While in the dinner hall the claimant was bumped into by another child whose custard had spilt onto the tray. As a result the custard from the tray spilt onto the claimant's left hand, sustaining injury."
Yet an 11-year-old schoolboy who lost a finger trying to find a way out of another school after being accidentally locked in was awarded just £250. Andrew Sanders had been playing cricket with other boys at when they realized the caretaker had left, locking them in. After trying to find a way out the boys climbed over a spiked security fence and Andrew caught his hand, ripping his finger so badly it had to be amputated.
Rotherham Council also paid out more than £450 for mobile phones, jewelry, clothes and other items lost on school premises.
Nick Seaton, said it was scandalous that payouts were made for “frivolous” claims. He said: "If someone has a serious accident due to negligence then it is quite right that that a claim can be made. But in other cases it needs to be stopped before things go too far.”
.
Posted by The Man at 6/12/2011 No comments:

'Bare as much you dare'

Nude protesters cycled through the streets of this weekend as part of the World Naked Bike Ride. They stripped off to their birthday suits to join a movement taking place across the planet. 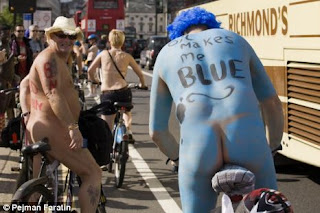 Baring all in front of heavy traffic, this was the eighth London World Naked Bike Ride, which set off from .
Approximately 1,000 naked cyclists stripped down to ride the nine miles, passing on the way, with many treating the Queen to a rendition of Happy Birthday in the process.
.
.
The dress code for the annual event was 'bare as you dare' and participants were not required to be completely naked.
Organizers suggest wearing 'as little as you can while still feeling comfortable.'
The event took place in more than 50 cities, including , Ottowa, , , , and thousands of people participated across the world.
As many as 3,000 people took part in the last year.
.
Posted by The Man at 6/12/2011 No comments: