I’m Too Young
A Florida man says the state is trying to force him to pay child support for a child who was born when he was 7 years old.
Rusty Cole, a National Guardsman from Port Orange, Fla., said his tax return was delayed by the state because officials told him he owes support payments for a child born in 1995 -- despite the fact that Cole was born in late 1987.
.
Man complains to cops about his hash buy
Police in Sweden said a man walked into a local precinct to complain about the quality of hashish he had purchased from a dealer.
Eslov police said the 26-year-old man told police he was a frequent user of marijuana and its derivatives, including hash, but the latest batch of hash he purchased sent him on a bad trip that made him feel like his TV was talking to him and his girlfriend was turning into a dolphin.
Police said it was unclear whether the man, who brought a small amount of the hash in for testing, will face possession charges. Possession of marijuana and its derivatives in small amounts is an offense usually punished with a small fine.
.
Truckload of marijuana goes missing
A truckload of confiscated marijuana that could be worth more than $1 million disappeared somewhere between Memphis and Louisville, Ky., sources say.
The more than 1,700 pounds of pot went missing during a controlled drug delivery going from Memphis to Louisville.
.
Man arrested for DUI asks officer what his favorite drink is
The man refused to take a breathalyzer test, the report said. While he was being driven to the Okaloosa County Jail, he asked the officer several times what his favorite alcoholic beverage was and asked him to turn on his blue lights.
.
Woman crashes Toyota into bulldozer
.
Posted by The Man at 2/23/2010 3 comments:

Something For Your Bathroom 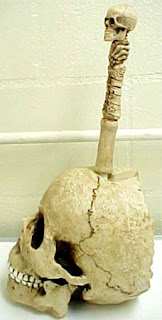 .
Imagine what your guests will say when they see a skull in your bathroom?
Only (13) days left to order the Skull Toilet Brush Holder on eBay.
.
Posted by The Man at 2/23/2010 No comments:

Scientist says, “People learn more after a nap”
Psychologists say an afternoon nap after lunch improves people's learning capacity
Psychologists say sleep clears the brain's short term memory and makes space for new facts to be remembered
People who nodded off for an hour after lunch performed better in learning tests than those who stayed awake all afternoon, the scientists found.
A study of students revealed that their brains were refreshed by napping only if they entered what is called stage 2 non-REM sleep, which takes place between deep sleep and the dream state, known as REM or rapid eye movement sleep.
.
Man did a B&E at a German Prison to have sex with his girlfriend
A loved-up burglar who broke in to prison night after night for sex with his girlfriend is now facing a permanent stretch himself.
Daniele Eberhardt, 33, scaled a ten-foot fence, dodged surveillance cameras and used a skeleton key made from a spoon to break into the low-security jail in the British Army garrison town of Bielefeld, Germany.
For nearly a month the other female jailbirds were driven to distraction by the passionate moans coming from cell 13 in Detention House C7 of the jail for petty thieves, drug criminals and benefit fraudsters.
It got so bad that the convicts broke the unwritten law of the underworld and told guards about the couple's illicit trysts.
Friedhel Sanker, deputy governor of the prison, said: 'Some of the other women felt that their sleep was being disturbed, while others feared that the man might try to come and visit them, too.
'They were going at it quite energetically, apparently."
'It was like listening to a bad porno movie,' one female inmate said.
.
Old Ways and New Ways
Amish Businessman Sets Up Surveillance System, Catches Thief On Camera
Amish tradition forbids taking photos of themselves, but some Amish business owners told News 8 that they have no problem taking someone else's picture -- especially if it helps catch a crook.
.
Marijuana use by seniors on the rise
Long a fixture among young people, use of the country's most popular illicit drug is now growing among the AARP age group
.
Is Masturbation good for your health?
.
Pedophile pediatrician accused of abusing 103 patients
.
Posted by The Man at 2/23/2010 No comments: