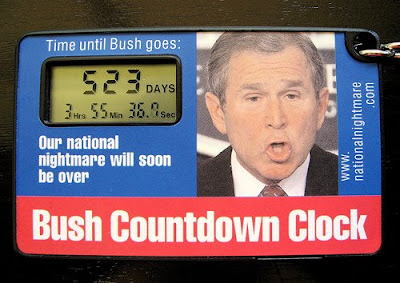 Carry Your keys while counting down the days, hours, minutes and seconds until G.W. Bush is out of office ! You can get one here.
Posted by The Man at 9/10/2008 No comments:

.
Drunk Squirrel
This squirrel was drunk from eating fermented pumpkins.
.
NM said...
You think this is funny but I think it's animal cruelty.
.
FIRST OF ALL I DO LIKE ANIMALS
To be animal cruelty there has to be harm to them.
First one even though the squirrel(s) were sent through the air they was always able to get up right away and run off. I think it was a way the homeowner was teaching the squirrels not to climb on their deck.
The second one there are all kinds of FERMENTED FRUITS IN NATURE that all animals eat.
The squirrel was fine the next day. Except for maybe a hangover.
.
Mad Izatie said...
It's not uncommon that animals get drunk. If they eat a fruit of a tree that has fallen (and fermented for a few days) they're bound to get drunk. But they recover later on and continue living. Sir David Attenborough's docos have clips of birds, monleys and giraffes getting drunk.
.
Anonymous said...
I have raised 300-400 cows and their calves which were fed daily. The silage was sometimes stored in trench silos that were open to the weather. Rain would filter through the fermented corn mix and the livestock would fight each other to stand at the gates and drink the run off. Nothing like watching a bunch of drunk 1200+ pound cows on a ten degree morning staggering around. Likewise for the stock dogs that worked the cattle, they headed there first.
.
Anonymous said...
Seems fair to me. Take close look at the video of the squirrel. About 1/2 of the way through the arc it spread it's tail and body and starts a controlled glide. They normally can glide quite long distances between trees naturally. No squirrels were harmed. Funny as hell too.
Posted by The Man at 9/10/2008 No comments:

Guys go to a public restroom only to be interrupted by a women’s marching band. 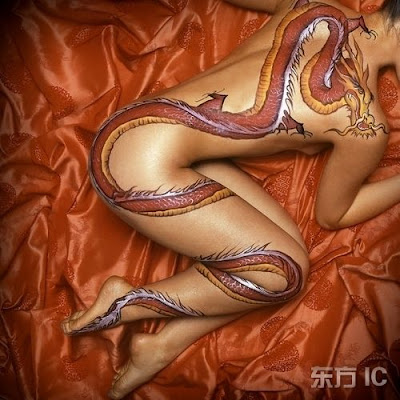 Not all women should fire guns

This girl hits herself in her head with a gun after shooting it.

Man blames bad driving on spilled beer - NOPE He's Drunk!
A man with four previous drunken driving convictions who was stopped for weaving in and out of traffic on Interstate 40 was ready with an excuse for his poor driving: his passenger spilled his beer. Not surprisingly, the man was arrested just before midnight Saturday, said New Mexico State Police Officer Kurtis Ward, who said he initially thought the driver was joking.
.
.
Man left girlfriend in prison to save money
A miserly German man left his girlfriend in prison rather than pay her £180 fine.
Magdalena Czerwinska, 34, was sentenced to 15 days in prison for theft but was told she could pay a fine instead.
But when she called Max Schuster and asked him to pay the fine for her he refused and said he would rather save the money for himself.
A police spokesman in Wanne-Eickel said: "He said he didn't feel like coming to pay the fine and so she is still stuck in jail.
"People are very worried in the current economic climate and they have to make whatever savings they can. He saw not paying the fine as a simple saving."
Max maybe looking for a new girlfriend in around 15 days.
.
They called cops, then they got busted
Two men are facing drug and weapons charges after they called Halifax police and claimed that two men had burst into their north-end Halifax apartment, fired a gun and then fled Sunday night.
Halifax Regional Police officers were called to the North Street apartment at 8:04 p.m. and were told by the men that another pair of men forced their way in, pointed a gun at them and shot.
However, police were unable to find evidence that a shot had been fired and a news release suggests a starter pistol or something similar may have been the weapon involved.
One of the men in the apartment said one intruder was white, in his 20's and had a bandana covering his face and couldn’t describe the second intruder.
While searching for evidence, officers found marijuana and a loaded handgun.
As a result, two men, 36 and 37, were arrested. They were released later Sunday night but were due in court Monday on drug trafficking and weapons offences.
.
Sorry, We've Lost Your Wife
A man who tried to send his late wife's body to their native Ecuador for burial is suing American Airlines and a funeral home, claiming her remains were sent to the wrong country.
Miguel Olaya, 60, says he hired the DeRiso Funeral Home in New York City to ship his wife's body to Guayaquil, Ecuador, on April 1, but the coffin wasn't at the airport when he went to meet it. He also claims the body was badly decomposed because it wasn't properly embalmed.
Christopher Robles, Olaya's lawyer, said the airline gave his client conflicting stories.
"First, they didn't know where her body was. Then, they said maybe it was in Miami, and finally they said it was in Guatemala," the lawyer said Tuesday. "Instead of sending it on the flight to Guayaquil, American sent the body to Guatemala City."
.
36-Year Big Mac Attack
Just call him the Big Mac "Daddy."
A 54-year-old Fond du Lac, Wis., man says his obsessive-compulsive disorder drove him to eat 23,000 Big Macs in 36 years.
Don Gorske, 54, says he hit the milestone last month, continuing a pleasurable obsession that began May 17, 1972 after he got his first car.
So how did Gorske keep a tally of the Big Macs? He kept every receipt in a box. He says he was always fascinated with numbers, and watching McDonald's track its number of customers motivated him to track his own consumption.
The only day he skipped a Big Mac was the day his mother died, to respect her request.
.
Man's gives one-fingered salute to police officer
Flipping the finger at police could cost the taxpayer at least £7,000, it was claimed yesterday. Authorities have been accused of wasting thousands on prosecuting a man for giving two police officers 'the finger'.
They pushed ahead with the 'trivial' case, which could end up costing £10,000 if an appeal is made, said solicitor David Battaliou. His client, Frank McGuigan, landed in trouble after allegedly making the offensive gesture at constables through a bus window. The officers stopped and boarded the bus in Exmouth, Devon, arresting the 54-year-old for a public order offence.
He refused to pay a fixed penalty notice and was taken to court last week. He denied the charge, claiming he had only pointed his finger and had not intended to cause offence during the incident on June 25.
The history of giving the finger
Before the Battle of Agincourt in 1415, the French, anticipating victory over the English, proposed to cut off the middle finger of all captured English soldiers. Without the middle finger it would be impossible to draw the renowned English longbow and therefore they would be incapable of fighting in the future. This famous weapon was made of the native English Yew tree, and the act of drawing the longbow was known as "plucking the yew" (or "pluck yew"). Much to the bewilderment of the French, the English won a major upset and began mocking the French by waving their middle fingers at the defeated French saying, "See, we can still pluck yew! "PLUCK YEW!" Since 'pluck yew' is rather difficult to say, the difficult consonant cluster at the beginning has gradually changed to a labiodental fricative 'F', and thus the words often used in conjunction with the one-finger-salute! It is also because of the pheasant feathers on the arrows used with the long bow that the symbolic gesture is known as "giving the bird."
.
Posted by The Man at 9/10/2008 No comments: