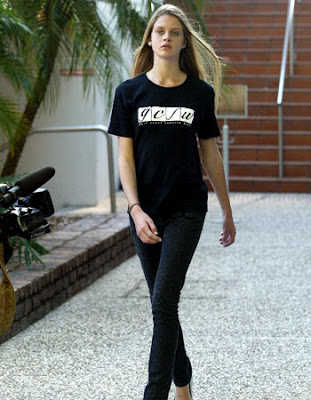 The girl chosen as the face of an Australian fashion event says she fits into women's clothes, so she should be allowed to model them — even though she just turned 13.
Prime Minister John Howard has led a chorus of criticism of the choice of Maddison Gabriel, who was 12 when she was named the face of the inaugural Gold Coast Fashion Week.
The middle school student told Australia's Channel Seven that she was the right model for the job.
"I believe that I can fit into women's clothes, I can model women's clothes, so I should be able to do it," Maddison said.
"It doesn't matter about age; it matters that you can do the job."
Her mother, Michelle Gabriel, also defended the role, saying at the time of her daughter's selection that she could be both a 12-year-old girl and a young woman.
"For a 12-year-old I think she's handling it very well; I'm very proud of her," she said.
Howard earlier said Australia should follow the example of Europe and ban models younger than 16 appearing on catwalks.
"We do have to preserve some notion of innocence in our society," he told Southern Cross Broadcasting in Melbourne.
"Catapulting girls as young as 12 into something like that is quite outrageous and I'm totally opposed to it and think most Australians would feel the same way."
Federal Labor leader Kevin Rudd said he was concerned that Maddison and others would miss out on their childhood.
"I have real concerns about littlies that young going out there doing that sort of thing," he said.
Premier Anna Bligh agreed that 12 is too young for the catwalk but stopped short of recommending the state legislate against it.
"I think 12-year-olds are children," she told reporters in Brisbane.
Bligh said parents and event organizers should exercise discretion when choosing models.
"There wasn't anything illegal going on, and I don't think it's an area we'd like to step in and have the state regulate," she said.
"But I would just say to organizers of an event like this, just be a little careful about what you're involving yourself with."
Gabriel said she was disappointed by Howard's and Rudd's comments.
"They obviously don't know the whole story," she said.
Her mother said Maddison was not hurt by the controversy.
"She's laughing; she's having fun," she said. "She thinks you're all mad.
"She said: 'What's all the fuss?'
"I'm just waiting for someone to say we are bad parents."
Maddison's fashion week engagements include an appearance at a Surfers Paradise nightclub, which bans underage patrons.
Gold Coast Fashion Week organizers were unavailable for comment.
Gabriel stressed the family had yet to make any money from Maddison's modeling.
Posted by The Man at 9/19/2007 No comments:

Forklift Removes 900-Pound Man From Home
Sep 19, 2007
LANSING, Mich. (AP) - Firefighters cut a hole in the side of a house and used a forklift to extricate a 900-pound man from his second-floor bedroom after a visiting nurse became worried about his health.
Rescue workers were called in Tuesday by the nurse, who determined the 33-year-old man needed medical help, Fire Chief Tom Cochran said.
Cochran said the man had not left his home since 2003.
The man's brother, who lives with him, said he suffers from Prader-Willi Syndrome, a rare genetic disorder that creates a chronic hunger feeling that can lead to overeating and life-threatening obesity.
Rescue workers brought in a forklift, high enough to raise a platform to a hole cut into the wall of the house. They covered the man with a blue tarp to shield him from onlookers and slid the platform onto a flatbed truck for a trip to Sparrow Hospital.

Seattle Trolley Line Has Acronym: SLUT
Sep 18, 2007
SEATTLE (AP) - Officially, it's the South Lake Union Streetcar. But in the neighborhood where the new line runs, it's called the South Lake Union Trolley - or, the SLUT.
At Kapow! Coffee, a shop in the old Cascade neighborhood, 100 T-shirts bearing the words "Ride the SLUT" sold out in days, and another 100 are on order.
"We're welcoming the SLUT into the neighborhood," said Jerry Johnson, 29, a part-time barista.
Some claim - incorrectly, according to representatives of Vulcan Inc., the company that is developing the area - that South Lake Union Trolley was the original name and that it was changed when officials belatedly realized the acronym.
The $50.5 million project should be completed with streetcars running in December. Underlying the lighthearted opposition, however, is resentment over changes in the old working-class neighborhood.
"There was a meeting with representatives from the city several years ago," Johnson recalled.
"They asked us, 'What we could do for you?' Most people raised their hands and said, 'Affordable housing,'" he said. "Then the people from the city huddled together - 'whisper, whisper, whisper,' - and they said, 'How about a trolley?'"
Since then, Cascade has been ignored in Vulcan brochures that lump the neighborhood together with Denny Park and Denny Triangle under the term South Lake Union. With the streetcar, said Don Clifton, a Cascade resident, "We learned how fun it is to change the name of things."
Posted by The Man at 9/19/2007 No comments: 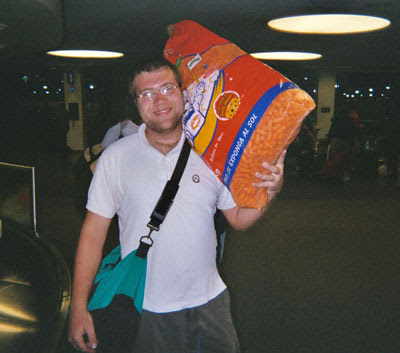 Honesty in the Product Naming 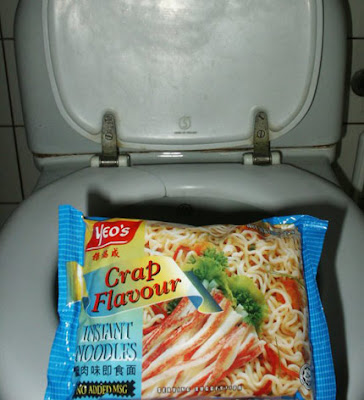 Right Back At Ya 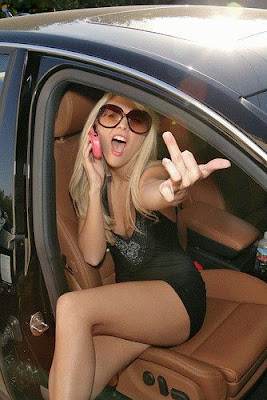 The unman hot air balloon that got away. 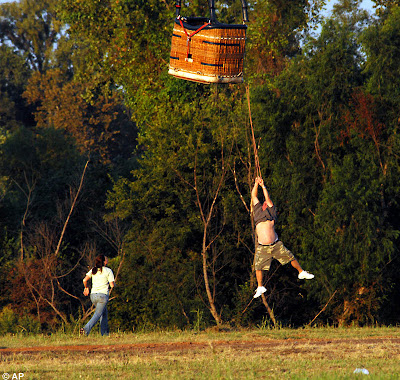 It really would be a Hell's Kitchen if you were presented with this lobster for the pot.
Fortunately, however, this Giant Pink Spiny lobster looks set to live out his retirement in an aquarium - and perhaps score a place in the record books. 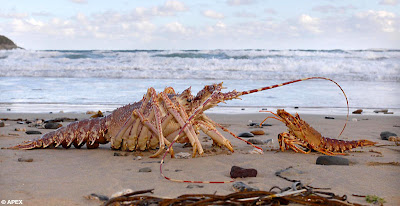 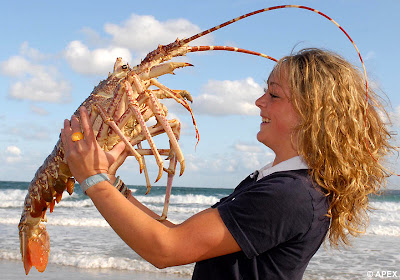 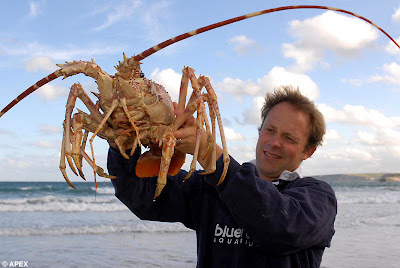 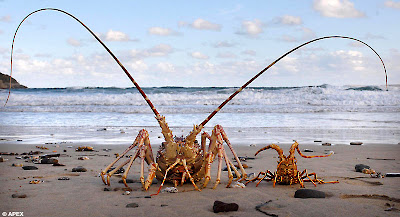 Holy Crap! That’s one hell of a monster lobster!

The :-) computer smiley symbol celebrates its 25th birthday today. The sideways face used in billions of emails was invented by an IT expert in Pittsburgh, US, reports The Sun. 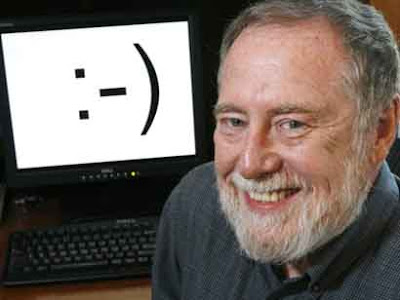 Prof Scott Fahlman was the first to use a colon followed by a hyphen and a close bracket to form a smiley in a computer message.
It has since spawned dozens of similar characters, including the wink ;-) sad face :-( yawn :-O and surprise 8-O.
Prof Fahlman said he prefers :-) to the modern computer graphic of a smiling face, adding: "It destroys the whimsical element of the original."

Central Kings students sent bullies a message, got beat up by their classmates for wearing pink. 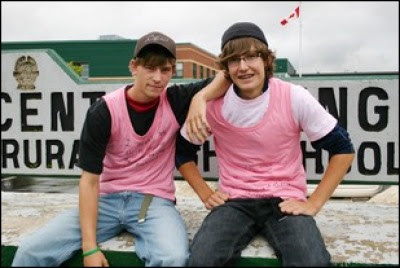 CAMBRIDGE — Two students at Central Kings Rural High School fought back against bullying recently, unleashing a sea of pink after a new student was harassed and threatened when he showed up wearing a pink shirt.
The Grade 9 student arrived for the first day of school last Wednesday and was set upon by a group of six to 10 older students who mocked him, called him a homosexual for wearing pink and threatened to beat him up.
The next day, Grade 12 students David Shepherd and Travis Price decided something had to be done about bullying."It’s my last year. ‘I’ve stood around too long’ and I wanted to do something," said David.
Posted by The Man at 9/19/2007 No comments:

Labels: In The News, Not Right, Pictures 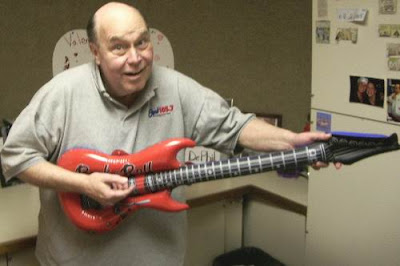 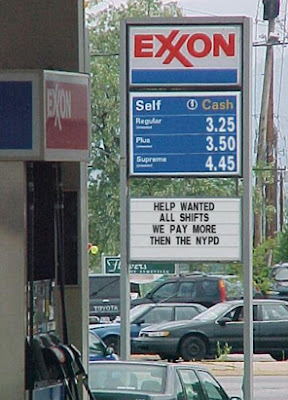 The "hand-washing police" say more guys need to step up to the sink.
The researchers who spy on people in public restrooms reported that one-third of men didn't bother to wash after using the bathroom, compared with 12 percent of women.
The latest study was based on observations last month of more than 6,000 people in four cities. Atlanta's Turner Field baseball stadium was the worst, as only 57 percent of guys there washed up. At Chicago's Shedd Aquarium and Museum of Science and Industry, 81 percent of men and women combined washed their hands, compared to 79 percent in New York's Penn and Grand Central train stations.
In a phone survey, 92 percent of people said they almost always wash after going to the bathroom. Experts recommend that people carry sanitizer gels and wipes in case they can't wash. » Article here
Posted by The Man at 9/19/2007 1 comment:

Jim McBride, a.k.a. Mr Skin, has made it his life's work to know how much naked female flesh appears in movies -- an obsession apparently shared by millions of people.
So far McBride and a staff that includes his mother, who works as a "skintern," have chronicled nude women in more than 25,000 movies and television shows. It is all recorded on his Web site, www.mrskin.com, which has been running for eight years, and on Saturday McBride launched into print, publishing "Mr. Skin's Skintastic Video Guide" to "the 501 greatest movies for sex and nudity on DVD."
"It's the greatest job in the world," said McBride. "As a kid I used to tape as many movies as I could with nudity and then I'd save the nude scenes on separate tapes. I really amazed my friends with my nudity knowledge growing up."Some experts say the Internet and more explicit television are fostering a more relaxed response by Americans to bare flesh, even if many people profess to be conservative. » Continue reading the full article here
Posted by The Man at 9/19/2007 No comments:

Anyone Want A Donut?

THAT IS ANY OTHER COP WANT A DONUT 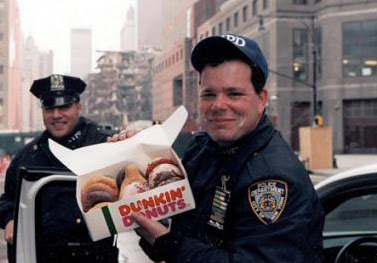 Man Reports Drugs Missing, Is Arrested
A Seattle man who reportedly told Border Patrol agents a stash of cocaine was missing has been charged with possession of the drug and intent to distribute.
Leroy Carr, 46, reported to Immigration and Customs Enforcement agents in August that he lost 31 grams of cocaine, the Seattle Post-Intelligencer reported Tuesday.
Click Here To Read More

OMG!! Look at this car it still starts and runs so why not drive it?

The Yar Hotel in Russia chooses quite an odd advertising statue.