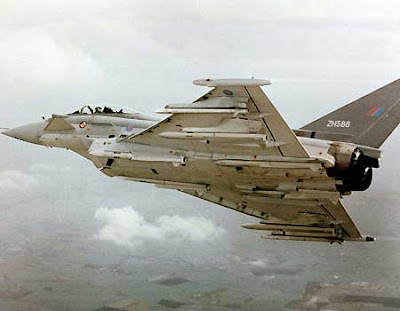 A Royal Air Force top gun crash-landed a new $136.3 million Typhoon fighter — apparently after forgetting to put the wheels down during a training exercise in California.
The state-of-the-art jet was badly damaged as it skidded along a runway on its belly at 130 mph.
"Everything points to the pilot forgetting to lower the wheels. Another possible cause of the accident is landing gear failure — but none of the other 48 Typhoons in service has been grounded with such a problem.
The top gun and his co-pilot from 17 Squadron climbed unhurt from the 1,500-mph jet. They were taking part in a major war games exercise at China Lake air base in California where aircraft can train with live weapons because of the remote location. The mangled jet will be brought back to Britain to see if it can be repaired.
.
Benny said...
You'd think the $136 million budget would stretch to a
"you're a about to land with no landing gear" warning light.
Posted by The Man at 5/02/2008 1 comment: 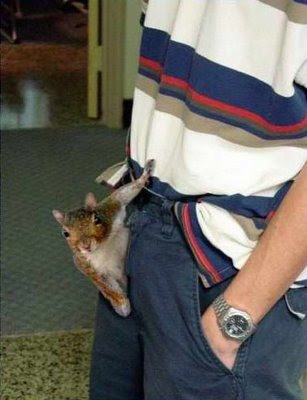 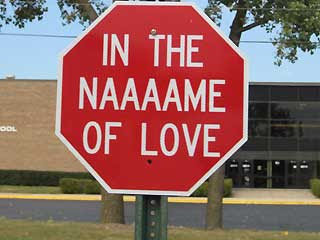 OAK LAWN, Ill. — Drivers passing through a suburb of Chicago will still have to stop, but they'll no longer need to do so "in the name of love."
Oak Lawn, Ill., has removed comical remarks in octagonal shapes it placed under stop signs in an effort to get motorists to obey the law.
Mayor Dave Heilmann said the Illinois Department of Transportation determined the signs violated the federal Manual on Uniform Traffic Control Devices. He said had Oak Lawn not removed the signs, the city could have lost federally funded projects.
Click here for photos of the stop signs.
Posted by The Man at 5/02/2008 No comments:

Smarter woman have worse sex.
BRAINY babes find it harder to have an orgasm – because they are too busy thinking, a study claims.
The German survey found that the more educated a woman was, the less likely it was that she would be satisfied by sex.
In the study 62 per cent of women who had completed their education said they often had problems achieving orgasm.
Only 38 per cent of women with a lower educational qualification said they had such problems.
The study conducted by a German lifestyle website surveyed over 2,000 women between the ages of 18 and 49.
.
Beaver breaks into vodka store
An urgent report from the city of Ozersk in Chelyabinsk Region on Friday night, revealed that a big wild animal had broken into a local store.
It said a large amount of hard liquor had been wasted as a result of the incident.When arriving at the scene, the Emergencies ministry workers, discovered a huge beaver in the pavilion. The critter was not afraid of people and when the emergency crew arrived it calmly continued with its personal hygiene.
Before being caught the beaver went on a small excursion of the shop, which included a stop at the alcohol section. There the animal tried to climb on one of the shelves and knocked several bottles of vodka on the floor.
Apparently, the animal was trying to escape the forest fires troubling the region recently.
.
Drunk man stumbles into home wearing pink G-string
Police responding to a report of an intruder found their man asleep in his car - wearing only a pink G-string. Minutes earlier, a bemused couple sitting in their home had been confronted by the near-naked drunk. They had left the door of their home in the Avenue, Starbeck, Harrogate, unlocked, as they were expecting their daughter home at about 9pm. But instead it was total stranger David Lapsley who walked in - "wearing no top and no shoes".
Posted by The Man at 5/02/2008 No comments: