Full Line of Care From Head to Toe

Jackson's Drug Use
Michael Jackson's former nanny Grace Rwaramba, who worked for the King of Pop for 17 years before being fired recently, tells The Times of London how bad his drug abuse was.
"I had to pump his stomach many times. He always mixed so much of it," she said.
"There was one period that it was so bad that I didn't let the children see him. He always ate too little and mixed too much," Rwaramba added.
At one point, she teamed with Jackson's mother Katherine and sister Janet for an intervention, which angered him.
"We tried to do an intervention. It was me, Janet, his mother. I coordinated it. He was so angry with me," she explained.
Rwaramba is expected to be interviewed by the police as part of the ongoing investigation into Michael's death.
.
Joe Jackson -- 'I Don't Like What Happened'
When Joe Jackson walked the red carpet at the BET Awards Sunday night, he once again expressed his concern about the circumstances leading up to Michael Jackson's death.
When asked by a CNN reporter about the people around Jackson during the last moments of his life, Jackson said, "I have a lot of concerns ... I don't like what happened."
.
Posted by The Man at 6/29/2009 2 comments:

A woman who has let her dog become uncontrollable lets it go and it bites a guy.
She wonders why the dog bites her in the, well, yeah.
.
.
Posted by The Man at 6/29/2009 1 comment:

Man has built his own alarm clock

This is what has gotten this dude to school and work on time for the last 4 years.
He mounted a large air cylinder to the head of his bed and a valve controlled by a computer which he program to wake him up in the morning.
.
.
Posted by The Man at 6/29/2009 No comments: 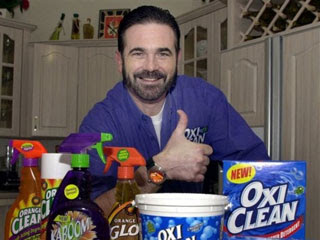 Television viewers knew him as the OxiClean guy: the bearded, boisterous pitchman on commercials airing hundreds of times a week nationwide. "Hi. Billy Mays here," he would begin, before showing off his latest cleaning product or gadget.
Mays was well known for his numerous television promotions of such products as Orange Glo and OxiClean. He was also featured on the reality TV show "Pitchmen" on the Discovery Channel,
Mays, 50, was found unresponsive by his wife inside his Tampa, Fla., home at 7:45 a.m. on Sunday, according to the Tampa Police Department.
.
Billy Mays Was Set to be Taco Bell's Pitchman
Billy Mays was about to film a bunch of commercials for Taco Bell -- this according to a radio host who talked to the pitchman a few hours before he died.
Todd "MJ" Schnitt from Tampa was interviewing Billy's "Pitchmen" co-star Anthony Sullivan this afternoon, when Todd eerily admitted to speaking with Billy on the phone late last night. During the call, Todd said Billy had just signed a deal with Taco Bell for a series of infomercial-style adverts that were going to be filmed in August.
Todd also said Billy told him he "hit his head on the overhead luggage compartment" when the US Airways airplane blew its front tires while landing in Tampa yesterday.
Audio Player
.
Posted by The Man at 6/29/2009 1 comment: