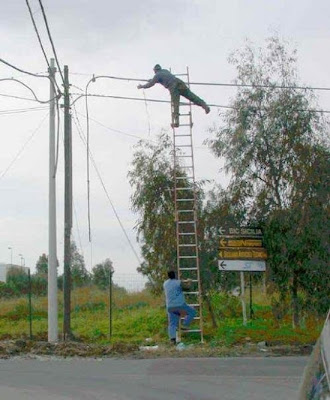 Safety Should Always be The First

If your already didn't know...

I Am Below Average
The average percentage of pages that contain cussing for all the websites that have taken the Cuss-O-Meter is 10%.
Posted by The Man at 7/15/2008 No comments:

We Going To Crash

Funny Moments Compiliation
Posted by The Man at 7/15/2008 No comments:

Another day, another provocative pictorial series starring a scantily clad Miley Cyrus. The latest batch of photos featuring the 15-year old Billion Dollar Girl staging her own personal Playboy Jr. shoot has surfaced online, thanks to a hacker who claims he got a hold of everything on Miley’s iPhone. 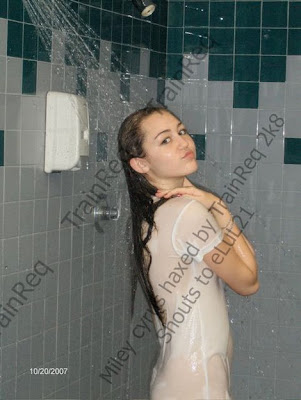 Pics of the 15-year-old wearing a white T-shirt without any underwear surfaced on a web forum at the weekend, while others show Cyrus with her T-shirt rolled up underneath her breasts, revealing her stomach and pouting at the camera. 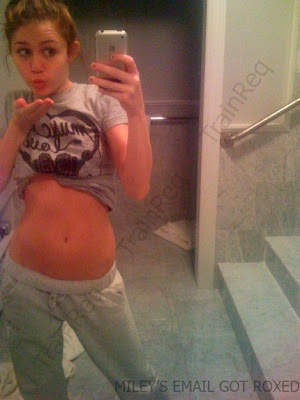 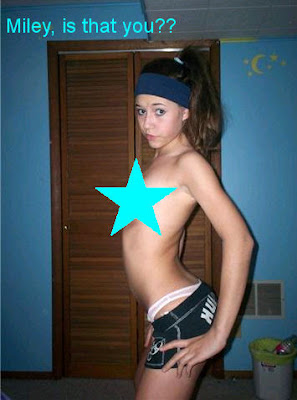 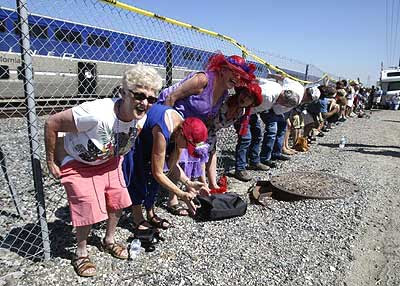 Police were called to break up a mass "mooning" event after a crowd of 8,000 turned up to bare their bottoms at passing trains.
The annual "Mooning Amtrak" celebration in the California town of Laguna Niguel was shut down for the first time in its 29 year history after complaints that participants were showing more than their behinds and drinking heavily.
Jim Amormino, a police spokesman, said officials deemed the event out of control after some mooners began taking all their clothes off and women started lifting up their T-shirts to flash passing trains. About 50 police officers were called in to disperse the crowd, which left peacefully.
The tradition is said to stem from a pub dare in 1979 when a drinker at the nearby Mugs Away Saloon promised his friends drinks if they went out to the railway line and mooned the next passing train. Many rose to the challenge and the mass moon became a regular event, complete with a website, moonamtrak.org
Posted by The Man at 7/15/2008 No comments:

Woman Accused Of Putting Dead Rat In Food
A woman accused of planting a dead lab rat in restaurant food and demanding $500,000 to keep quiet was charged Monday with one felony count of extortion.
Debbie R. Miller, 41, of Appleton, also faces misdemeanor counts of disorderly conduct and resisting an officer. Miller claimed to find the rat in her lunch April 17 as she ate at the upscale Seasons Restaurant in Grand Chute, according to the criminal complaint. She threatened to alert the media unless the owners paid her $500,000, the complaint said.
The owners turned the rat over to their insurance company. Investigators there determined the rodent was a white laboratory rat, the complaint said. Tests also suggested the rodent had been cooked in a microwave, but the restaurant doesn't use microwaves in cooking.
.
Australian man convicted of his seventh drunk-driving charge
A man convicted of drink-driving for the seventh time spent more than $1000 a week on Melbourne Bitter Beer.
Construction worker Michael Leary earns $2000 a week gross -- or about $1440 after tax -- on Darwin's waterfront project, the Darwin Magistrates Court was told.
The father-of-four spends $150on rent, $150 on buses and taxis and $50 on his phone and the rest, almost $1100, is spent on his favorite beer -- Melbourne Bitter beer.
The magistrate banned Leary from buying or even holding a beer for 12 months.
.
SUV Avoids Pedestrian, Ends Up Hanging In The Air
Denver police are investigating an accident after an SUV ended up on top of a power pole. The accident happened at 44th Avenue and Pecos Street. The driver swerved to miss a man walking his dog and ended up on top of the pole. Neither individuals were injured, but the dog was hit and killed. The driver was arrested on suspicion of driving under the influence of alcohol.
PICTURE
.
Agents Uproot $20M Worth Of Pot In Calif. Forest
Federal agents have uprooted more than $20 million worth of pot in three huge marijuana grows within San Diego County's Cleveland National Forest. The Drug Enforcement Administration says more than 7,200 marijuana plants, some up to seven feet tall, were confiscated in last week's raids. The raids included DEA agents, National Guard troops and U.S. Forest Service, Bureau of Land Management and San Diego Sheriff's Department investigators. More than 60 marijuana growing sites and more than 128,000 plants have been discovered so far this year in the San Diego area.
.
'Crook' Leaves a Clue Behind
A burglar who swiped more than $200 from a Brooklyn apartment was back within moments begging to return the stolen cash - in exchange for the wallet he left behind.
Victor Marin, 20, broke into the 40th Street building in Borough Park last Thursday and made off with the money, but left his billfold - complete with his identification - on the victim's bed, according to police sources.
.
Boston Firefighter On Disability Also Bodybuilder
Boston's fire commissioner is urging the city's retirement board to deny the disability claim of a firefighter who competed in a bodybuilding contest even though he claims he can't work because of a back injury. The Boston Globe first reported Monday that 46-year-old Albert Arroyo reported that he suffered the injury on March 21. His doctor wrote that Arroyo should be granted an accidental disability retirement because he is "permanently disabled." Yet on May 3 after collecting his full $68,000 annual salary tax free for six weeks, Arroyo finished eighth in a bodybuilding competition. Arroyo, who inspects buildings as a member of the Fire Prevention Division, has since been shifted from injured leave to regular sick leave, which is taxable, after a doctor determined that any injury was not work-related.
VIDEO
.
Firefighter charged with arson
A volunteer firefighter from Sergeant Bluff has been arrested and charged with first-degree arson. A criminal complaint and affidavit says that Heath Erickson allegedly set fire to a home in Sergeant Bluff. Erickson was arrested Thursday by the Woodbury County Sheriff's Office. The complaint says Erickson left the scene but returned to observe the fire. Erickson then allegedly called his wife to report the fire and responded to the blaze. Erickson has been charged with one count of first-degree arson.
" Must have been trying to ensure job security. "
Posted by The Man at 7/15/2008 No comments: