Top Ten Reasons Trick-Or-Treating Is Better Than Sex
10. You’re guaranteed to get at least a little something in the sack.
9. If you get tired, wait 10 minutes and go at it again.
8. The uglier you look, the easier it is to get some.
7. You don’t have to compliment the person who gave you candy.
6. The person giving you candy doesn’t fantasize you’re someone else.
5. If you get a stomach ache, it won’t last 9 months.
4. If you wear a Batman mask, no one thinks you’re kinky.
3. It doesn’t matter if kids hear you moaning and groaning.
2. Less guilt the next morning.
1. If you don’t get what you want, you can always go next door.
.
S - H - I - T
A business man got on an elevator in a building. When he entered the elevator, there was a blonde already inside and she greeted him by saying, "T-G-I-F" (letters only).
He smiled at her and replied, "S-H-I-T" (letters only)."
She looked at him, puzzled, and said, "T-G-I-F" again.
He acknowledged her remark again by answering, "S-H-I-T."
The blond was trying to be friendly, so she smiled her biggest smile and said as sweetly as possibly "T-G-I-F" another time.
The man smiled back to her and once again replied with a quizzical expression, "S-H-I-T."
The blond finally decided to explain things, and this time she said, "T-G-I-F, Thank Goodness It’s Friday, get it?"
The man answered, "Sorry, Honey, It’s Thursday."
.
Dead Serious
A couple has not been getting along for years, so the husband buys his wife a cemetery plot for her birthday.
Well, you can imagine her disappointment. The next year, her birthday rolls around again and this time he doesn’t get her anything.
"Why didn’t you get me a birthday present!?" she asks angrily.
"Are you kidding me?" He replies, "You didn’t use what I got you last year!"
.
Be Careful What You Wish For
A couple had been married for 25 years and were celebrating their 60th birthdays, which fell on the same day.
During the celebration a fairy appeared and said that because they had been such a loving couple for all 25 years, she would give them one wish each.
The wife wanted to travel around the world. The fairy waved her hand, and Boom! She had the tickets in her hand.
Next, it was the husband’s turn. He paused for a moment, then said shyly, "Well, I’d like to have a woman 30 years younger than me."
The fairy picked up her wand, and Boom! He turned 90.
.
Posted by The Man at 11/01/2008 No comments: 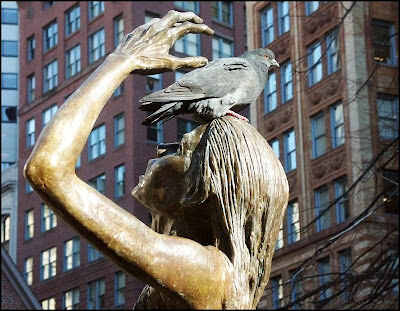 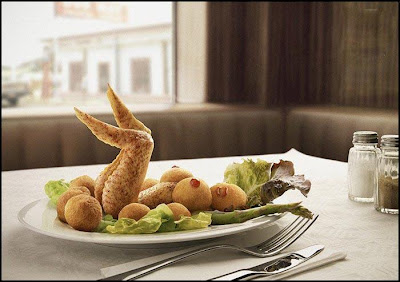 How to Serve Chicken Wings! 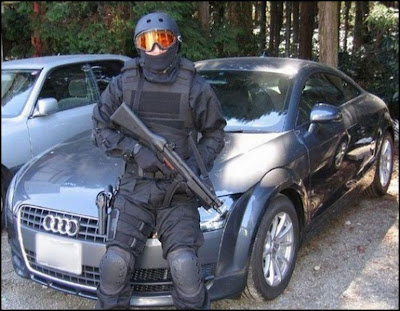 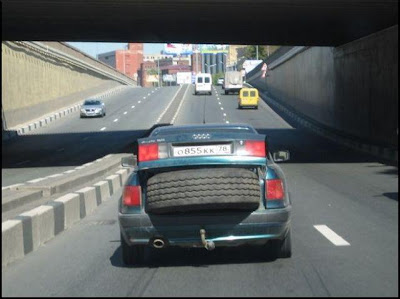 Does this place exist? 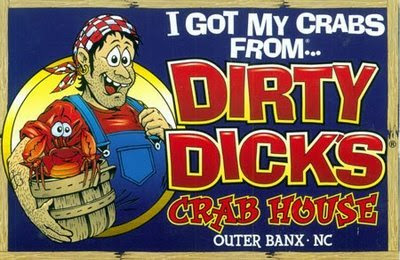 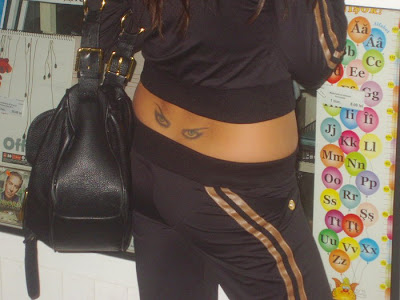 The English is clear enough to lorry drivers - but the Welsh reads "I am not in the office at the moment. Please send any work to be translated." 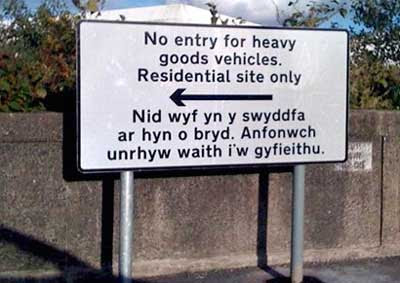 Tell Me The Truth
A VICAR turned up in agony at a hospital — with a potato stuck up his bottom.
The clergyman told stunned casualty nurses he fell backwards on to his kitchen table while hanging curtains. He happened to be nude at the time of the mishap.
The embarrassed reverend, in his 50s, had to undergo a delicate operation to extract the offending vegetable.
The spud was yesterday revealed to be among a litany of objects medics in Sheffield have removed from people’s nether regions.
Others include a can of deodorant, a cucumber, a Russian doll — and a carnation.
Like most of the other patients, the red-faced vicar insisted to staff at the city’s Northern General Hospital that his predicament was NOT the result of a sex game gone wrong.
A & E nurse Trudi Watson said: "He explained to me, quite sincerely, he had been hanging curtains naked in the kitchen when he fell backwards on to the kitchen table and on to a potato.
"But it’s not for me to question his story.
.
Man finds a unwanted condiment with his hot dog bun
North Carolina man found more than just bread when he opened up a bag of hot dog buns. Bruce Van Dyne says "I was cooking dinner and I brought these out and I opened them up."
Bruce says "that it was clearly a mouse."
The rodent's parts he says, pretty easy to make out.
Bruce says "I see the little ears. Clearly that's a tail. I don't know what that is, part of his leg or something, but that mouse is baked in there."
The IBM executive says he doesn't want money from this ordeal, just answers and action.
So he called Arnold bread but says they told him not to call the Concord store where he bought the buns.
Bruce says "she told me, 'ah no, you don't need to call BJ's, just send it back to us.'"
BJ's Wholesale apparently worried, too. They pulled all bread products made at the same Florida factory where these buns came from.
Video, Picture and More
..
I worked at Wonder Bread when I was younger
It is impossible for a mouse to survive the process in one piece.
Especially the slicing part of packaging.
Posted by The Man at 11/01/2008 No comments: