Embarrassing Times
An armless man walked into a bar which is empty except for the bartender. He ordered a drink and when he was served, asked the bartender if he would get the money from his wallet in his pocket, since he has no arms. The bartender obliged him. He then asked if the bartender would tip the glass to his lips. The bartender did this until the man finished his drink. He then asked if the bartender would get a hanky from his pocket and wipe the foam from his lips. The bartender did it and commented it must be very difficult not to have arms and have to ask someone to do nearly everything for him. The man said, "Yes, it is a bit embarrassing at times. By the way, where is your restroom?" The bartender quickly replies "The closest one is in the gas station three blocks down the street."
.
Teenage Sex
The mother of a 17-year-old girl was concerned that her daughter was having sex. Worried the girl might become pregnant and adversely impact the family’s status, she consulted the family doctor. The doctor told her that teenagers today were very willful and any attempt to stop the girl would probably result in rebellion. He then told her to arrange for her daughter to be put on birth control and until then, talk to her and give her a box of condoms.
Later that evening, as her daughter was preparing for a date, the woman told her about the situation and handed her a box of condoms. The girl burst out laughing and reached over to hug her mother saying: "Oh Mom! You don’t have to worry about that! I’m dating Susan!"
.
Women Superiority
We got off the Titanic first.
We can scare male bosses with mysterious gynecological disorder excuses.
When we buy a vibrator it is glamorous.
When men buy a blow up doll it's pathetic.
Men's clothes make women look elfin and gorgeous.
Men look like complete idiots in women's clothes.
We can be groupies. Male groupies are stalkers.
We've never lusted after a cartoon character or the central figure in a computer game.
Taxi's stop for us.
Men die earlier, so we get to cash in on the life insurance.
We don't look like a frog in a blender when dancing.
We know the Truth about whether or not size matters.
It's possible to live our whole lives without ever taking a group shower.
No fashion faux pas we make could ever rival the male's Speedo.
We don't have to fart to amuse ourselves.
We never have to wonder if his orgasm was real.
.
CRISCO
There was a mature gentleman wandering around in a supermarket calling out at intervals, "Crisco, Cris--co!"
Finally a store clerk approached.
"Sir, the Crisco is on aisle five."
"Oh," replied the old gentleman,
"I'm not looking for cooking Crisco, I am calling my wife."
"Your wife is named Crisco?"
"Nah," he answered,
"I only call her that when we come to the supermarket."
"Oh? What do you call her when you are not in the supermarket?"
"Lard ass."
.
TWO STORY HOUSE
A man appears before a judge one day, asking for a divorce. The judge quietly reviews some papers and then says, "Please tell me why you are seeking a divorce."
"Because," the man says, "I live in a two-story house." The Judge replies, "What kind of a reason is that? What is the big deal about a two-story house?"
The man answers, "Well Judge, one story is 'I have a headache' and the other story is 'It's that time of the month.'"
Posted by The Man at 8/06/2008 No comments:

1. You refine heroin for a living, but you have a moral objection to beer.
2. You own a $3,000 machine gun and $5,000 rocket launcher, but you can't afford shoes.
3. You have more wives than teeth.
4. You wipe your butt with your bare left hand, but consider bacon 'unclean.'
5. You think vests come in two styles: bullet-proof and suicide.
6. You can't think of anyone you HAVEN'T declared Jihad against.
7. You consider television dangerous, but routinely carry explosives in your clothing.
8. You were amazed that cell phones have uses other than... setting off roadside bombs.
9. You've ever uttered the phrase, "I love what you've done with your cave."
10. You have nothing against women and think every man should own many.
11. You bathe at least monthly, whether necessary or not.
12. You've ever had a crush on your neighbors goat.
.
tony said...
Or you wear a towel as a hat.
Posted by The Man at 8/06/2008 No comments:

Now that’s what you call a ASS 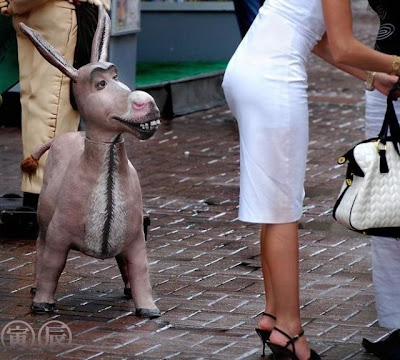 Southern California Hits 812 Degrees
The ground is so hot in one part of Southern California it can melt the shoes right off your feet.
An unexplained "thermal anomaly" caused a patch of land in Ventura County to reach a temperature of over 800 degrees on Friday, baffling experts who have been monitoring the area for weeks.
The anomaly was discovered after the land got so hot, it started a brush fire and burned three acres last month. Firefighters were brought to the scene after reports of a blaze, but by the time they arrived only smoldering dirt and brush remained.
.
Wash. governor forgets ID, can’t get into bar
Bouncer turned her away because she couldn't prove she’s legal to drink
Washington Gov. Chris Gregoire age 61 is taking it as a compliment: She was turned away from a bar in the state capital because she couldn't prove she's of legal age to drink.
Gregoire says the man checking identifications at the door told her she couldn't get in without ID, even when others pointed out she's Washington's governor.
.
Nude dancing remains an art in Iowa
A judge Friday ruled in favor of a nude dancing club owner charged with violating Iowa's indecent exposure law.
Fremont County Judge Timothy O'Grady said prosecutors failed to prove the club wasn't a theater. Iowa law allows nudity at theaters, museums and other venues devoted to the arts or theatrical performances.
The county's attorney, Margaret Johnson, charged club owner Clarence Judy after a 17-year-old girl climbed on stage at Shotgun Geniez in the tiny town of Hamburg and stripped off her clothing.
"I think it's a little scary," said Johnson, who emphasized that the girl was still a minor.
.
Woman Attacked Husband With Frozen Lasagna
An Atlantic Beach woman was taken into police custody after investigators said she used frozen lasagna to serve up violence instead of serving it for dinner.
Amanda Trott is charged with domestic battery after police said she attacked her husband with the frozen food during an argument.
"Mr. Trott claimed that Mrs. Trott had slapped him across the face several times and threw a frozen lasagna at him that struck him at the top of his head.
He said the incident began last weekend when officers were called to the Sea Oats Apartments after neighbors called them with concerns about the Trotts' children.
Police said they confronted the couple and Amanda Trott eventually confessed to hitting and attacking her husband.
PICTURE and More
.
Naked man jailed for fondling himself
A naked 30-year-old man was arrested early today for allegedly fondling himself while following a garbage truck.
Kennewick police were called at 7:15 a.m. to an apartment complex at 1138 W. 10th Ave., after a Waste Management driver reported seeing a naked man outside.
The man, later identified as Johnathon Cecil Foster, then went into a garage, put on some white shorts and followed the garbage truck while fondling himself. Foster also was reportedly seen urinating in public.
Officers found Foster, who had ran away, and caught him try hiding near one of the buildings.
Foster said he had been in an apartment and had gone outside to drink some alcohol and smoke. He told police he then realized he locked himself out and walked over urinated just as the garbage truck pulled up police said.
Foster claimed he had his shorts on the whole time and just dropped them down while relieving himself.
He said he followed the garbage truck because he was upset that the driver was looking at him, police said.
Posted by The Man at 8/06/2008 No comments: