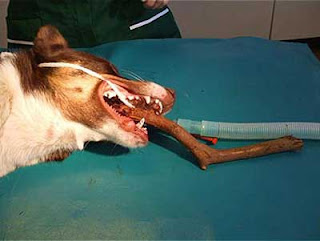 Vets have saved a dog after a three-hour operation to remove a 20 inch long stick which became lodged in the pet's throat during a game of catch.
Archie, an eight-month-old border collie, ran into the stick at speed after it was thrown at the dog to chase.
The stick tore through the animal's windpipe and shredded the muscles down the side of its neck.
The dog collapsed unconscious and the owner's father Steven Harding carried it half a mile to its home in Exeter, Devon.
He then took it to a surgery where three local vets Peter Howard, John Gale and Sara Eley opened up its neck and removed the stick.
Mr Howard said: "It was impossible to know what damage had been done to vital structures in Archie's mouth, throat and neck but it was obviously a life threatening condition.
"There were two small branches acting like barbs anchoring the stick inside the throat.
"Amazingly the major blood vessels of the neck had avoided potentially fatal damage and after three hours of intense surgery the stick was removed through the neck incision and all the wounds repaired."The dog is now recovering at home where he has been banned from playing with sticks.
Posted by The Man at 9/07/2008 No comments:

He knows already what he likes - NSFW

Princes Sara - The Wild Side - NSFW

Bank robber bought lotto tickets
Police in Joliet, Ill., said a bank robbery suspect was arrested after he used allegedly stolen money to buy lottery tickets minutes after the crime.
Deputy Police Chief Patrick Kerr said Jack Menolascina, 48, was spotted by a police officer behind a gas station only three minutes after the 11:29 a.m. robbery at a Bank of America branch on the opposite corner from the station, the Joliet Herald reported Friday.
"He had just purchased $10 of scratch-off lottery tickets inside," Kerr said.
"Menolascina was very apprehensive when the officer approached him," Kerr said. "He was placed in handcuffs. The officer patted him down and found he was carrying a large amount of currency in a bank wrap."
.
Man Shot for His Pants
A man is fighting for his life after being shot for his pants in Springfield. The Jacksonville Sheriff's Office says 24-year-old Cedrick Davis was shot around 7:45 Friday night at the corner of East 9th and Walnut Streets.
Officers say Davis walked up to two men in a pick-up truck. The three got into an argument and the men in the truck got out and shot the victim. Witnesses tell police the men pulled off the victim's pants and drove off. One woman saw the whole thing from her front porch and ran into her house and locked the door after she say a man came towards her with a gun.
Investigators say robbery for the pants was the motive for the shooting.
Davis was rushed to Shands with life-threatening injuries.
NEWS Video
.
Mystery inmate refuses to leave jail
An inmate is frustrating prison bosses by refusing to leave jail - two years after serving his sentence. The male prisoner, who is a foreign national, has exploited a loophole in the system by refusing to divulge his real name and country of origin. He was due to be deported to his home country when he completed a six-year sentence for wounding with intent and aggravated burglary at HMP Peterborough in 2006.
But the necessary paperwork cannot be processed because he has refused to give prison officers his name or reveal the country where he was born. Angry prison bosses fear the unnamed inmate could potentially remain at the prison indefinitely - costing the taxpayer an estimated £30,000-a-year.
"He has been due for deportation since he completed his sentence almost two years ago, but the prison has no choice but to hold him until we get the information.
.
5-Year-Old Gets Hole-in-One on Illinois Course
Look out Tiger Woods, 5-year-old Drew Gray's got game.
The kindergartner had a hole-in-one — though it doesn't count because it was on par-3 course — last week on the 75-yard, fifth hole at Yorktown Golf Club. The shot was witnessed by several family members and verified by course owner John Bethard.
Drew is the youngest player to ace a hole at the course, Bethard said. Drew has been playing golf on family outings for two years. He played this summer in the club's golf camp for 4-to-8-year-olds, Bethard said.
.
Man Offers Woman $100 To Hide Him
A man on the run from Pasco County deputies offered a Spring Hill woman $100 to hide him from authorities. She didn't take the money.
The Sheriff's Office reports that 23-year-old Joshua Christian barged into the woman's home, offered her the money and then went into a closet.
But when deputies tracked Christian from his nearby home to the woman's house, she turned him in.
Authorities say Christian was wanted for several crimes, including beating two people with a baseball bat, taking a BlackBerry cell phone and stealing an all-terrain vehicle.
Posted by The Man at 9/07/2008 No comments: