Convenience Store Clerk Turns Tables on Robber
Aug 9, 2007
ALBANY, N.Y. (AP) - A robber's clumsy pursuit of cash left him staring at the barrel of his own shotgun after he set it on the convenience store counter and the clerk snatched it up, officials said.
A surveillance video captured the man in sunglasses and a hooded sweat shirt, stuffing money from the register into his pockets and leaving his gun unattended early Tuesday.
That's when Quail Street News clerk Hafiz Alam grabbed the weapon by the barrel, quickly turned it around and pointed it at the man, who dashed out.
Seconds later, the robber rushed back into the store and leaped over the counter. Alam and the suspect, 22-year-old Justin Walker, struggled over the gun off-camera, authorities said.
The gun went off, but neither man was injured.
The robber drove off, but not before a truck driver took down his license plate number.
Police said they tracked the suspect to an Albany apartment, where they launched tear gas inside and got him to surrender. He was arrested and charged with robbery.

Teen Burned, After Lighting Fire Near Gas
Aug 9, 2007
TWO RIVERS, Wis. (AP) - An 18-year-old man was severely burned Thursday after he lit a flame while trying to steal gasoline from a riding lawnmower. He and another 18-year-old man were in a Town of Two Rivers shed early Thursday, trying to extract the fuel from the mower.
At one point, they decided they needed more light, so one of them ignited burning materials, according to Manitowoc County Sheriff's Inspector Gregg Schetter. The gasoline then exploded, Schetter said.
One of the men was taken to a Milwaukee hospital with serious burns.
Authorities learned of the theft after responding to a 4 a.m. call Thursday of a shed on fire.
County sheriff's deputies and Two Rivers police officers eventually learned of the burned man and connected the clues, Schetter said.
The other man wasn't injured. He was being held in the Manitowoc County Jail, Schetter said.

YouTube Video Helps Catch Thief
Aug 10, 2007
WELLINGTON, New Zealand (AP) - A thief was convicted and fined after being spotted on a video posted on the Web site YouTube.
The man was taped slowly circling the store, stealing a laptop computer, slipping the computer into his overcoat and stepping out of the store in the South Island town of Greymouth, local media reported Friday.
The whole performance was posted on YouTube - set to "The Pink Panther" music track - and attracted 500,000 hits from around the globe.
One viewer recognized the man and alerted police. Dawson Anthony Bliss, 50, was convicted of theft in Greymouth District Court on Thursday after pleading guilty.
Judge Gary MacAskill fined Bliss $1,485 and ordered him to pay $1,478 in reparation.
Greymouth on South Island's west coast is 234 miles south of the capital, Wellington.
Posted by The Man at 8/10/2007 No comments:

Labels: Funny Stuff, In The News, What a "Dumb Ass" 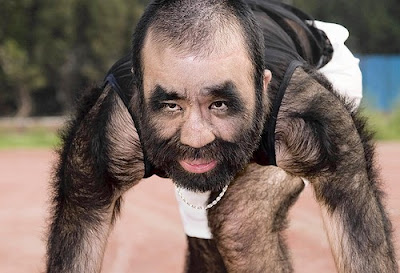 Going the Straight and Narrow 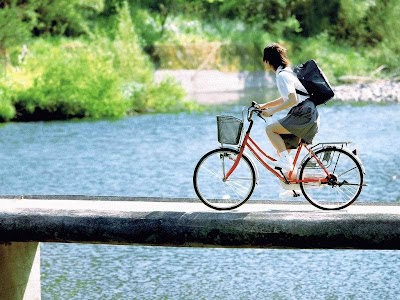 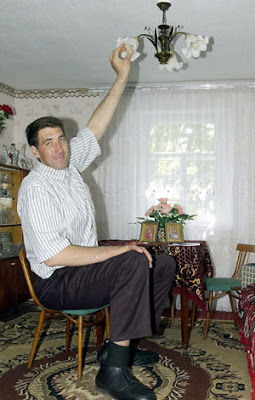 Ukrainian Leonid Stadnyk has now officially become the world's tallest man standing at a towering 8ft 5ins in tall.
Measuring an impressive 8ins taller than the previous record holder, Mongolia's Bao Xishun, it has long been suspected that Stadnyk should hold the official title of the world's tallest man. The towering giant who lives in Podoliantsi, a tiny village in Ukraine has called his height 'God's biggest punishment for me' and refuses to look in the mirror. His extraordinary growth spurt started at the age of 14 after surgery on a benign brain tumor stimulated his pituitary gland, which is responsible for generating the hormones that boost growth.
With more photos.
Posted by The Man at 8/10/2007 No comments:

How are you keeping cool? 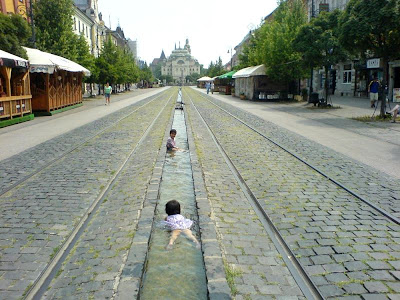 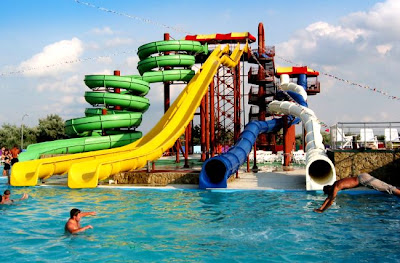 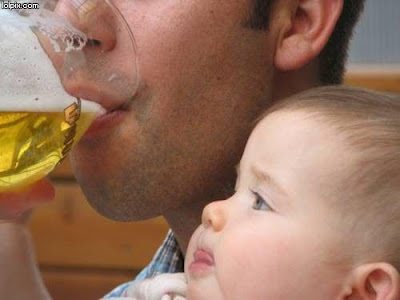 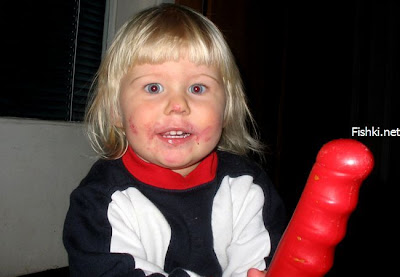 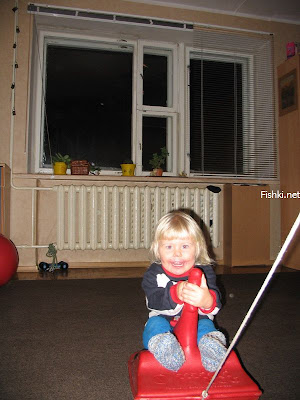 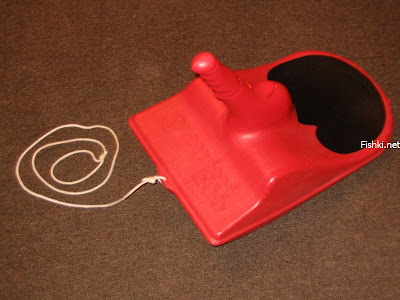 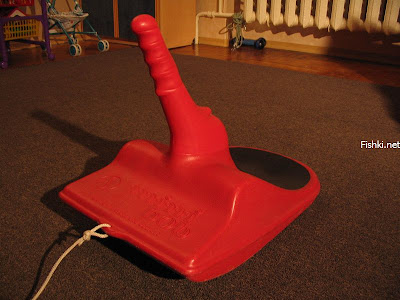 A rabbit out smarted a hawk 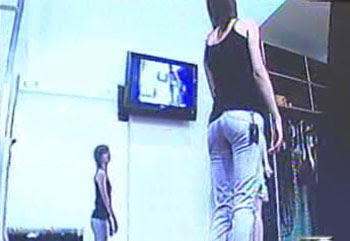 Ladies with the Butt Cam you can answer your own question and let the man in your life off the hook for the wrong answer.
Shoppers are checking out their back half, not in a mirror, but on a TV screen.The Butt Cam at Hub Clothing in Scottsdale is capturing a side of shoppers they haven't seen.
With news video.
Posted by The Man at 8/10/2007 No comments:

US Government developing a “Puke-Ray”
The Homeland Security Department is aiming to arm federal agents with a light-saber weapon emitting a dazzling strobe that would subdue criminals, terrorists and even unruly airline passengers. It’s the latest government effort to develop a nonlethal weapon — in this case, a powerful beam of light that temporarily blinds anyone who looks into it.“The light could be used to make a bad guy turn away or shut his eyes, giving authorities enough time to tackle the suspect and apply the cuffs, all while sparing the lives of passersby, hostages or airline passengers,” according to a description of the device from the Homeland Security Department’s science and technology division. Program manager Gerald Kirwin said Homeland Security has so far invested $1 million for testing of the LED (light-emitting diode) Incapacitator. It is being developed by a Torrance, Calif., company, Intelligent Optical Systems, and it will be tested this fall on volunteers at Pennsylvania State University’s Institute of Non-Lethal Defense Technologies.
Posted by The Man at 8/10/2007 No comments:

Being Obese Is Not Just A American Problem

The extraordinary scene as man is laid to rest in Britain's biggest casket
Tipping the scales at more than 700 pounds Mark Bamber could never lead a normal life.
After the father-of-one died of heart failure aged 38, his family were determined he should have a dignified send-off. 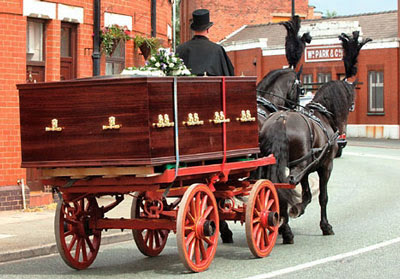 To accommodate his formidable 700lb-plus frame, a mahogany casket was built -
7ft 11in long, 4ft 6in wide and 30in deep.
As it wound its way fully laden through the streets of Mr Bamber's home town of Wigan, it weighed more than half a ton. 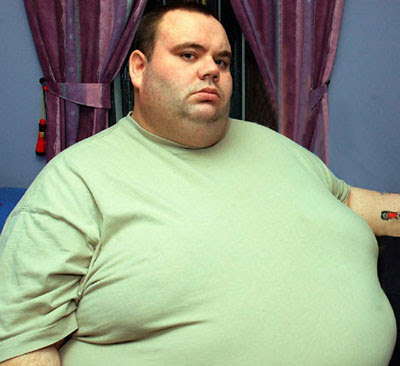 Alan Roby, of funeral directors Thorley Smith, the firm that supplied the casket, said: "It really was at the very edge of what is dignified. It has got to be the biggest casket ever used in this country. And it is a casket rather than a coffin. A casket is a straight rectangular box. It would have been impossible to make the coffin shape at that size. "He added: "There are no hearses available that would be big enough for a casket that size so there had to be a horse-drawn platform for the journey to the cemetery."
Posted by The Man at 8/10/2007 1 comment: