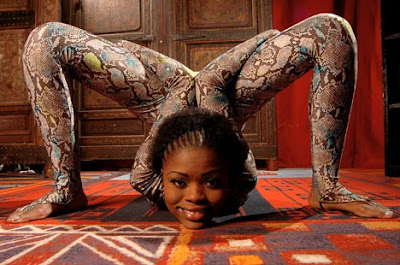 Nokulunga Buthelezi is standing in a Big Top in London's Docklands with her foot on top of her head. She removes the foot easily and, just as easily, replaces it with her other one.
Then Nokulunga - known as Lunga, or, more flamboyantly, Snake-Girl - puts the other one back. Now both feet are on her head.
Bend of the world: Nokulunga Buthelezi says her amazing talent has always just come naturally ? Even as a baby the South African would bend over backwards in her cot
Most women couldn't speak with one foot on their head, let alone both, but not Lunga. She chatters away in a tight green snake costume, swaying but not falling over, flexing her super-supple body like a python.
PICTURES

I Don’t Go For That Kind Of Stuff

When Trust is Violated and Boundaries are Crossed
Posted by The Man at 7/08/2008 No comments:

Man dies of water overdose
A man died from drinking vast amounts of cold water to relieve painful gums.
Andrew Thornton, 44, ‘ overloaded’ his body after drinking – more than 17 pints – in eight hours.
He had also been drinking at a similar rate for the previous two days as it helped to numb his mouth, an inquest heard.
The divorcee, who played football regularly and was physically active in his job as a warehouseman, thought he was being sensible by refusing to take painkillers for gum disease.
He was taken to hospital last December after collapsing at the home he shared with his mother Alice, 65, and her partner in Bradford.
Doctors initially thought he was drunk because he was staggering and slurring his words.
However his symptoms were caused by swelling in the brain brought on by excess fluid.
Doctors put salt back into his body to counter the effects of his water intake, but the following day he had a fatal heart attack.
‘Your body tells you how much you need. Eat and drink normally and your body will regulate itself.’
.
Man cut free from 'S&M' chastity belt by firemen
Firefighters had to cut a man out of a titanium chastity belt intended for sex games last week.
Crews from Kingston fire station were called to the red-faced man's home about 11pm after he had spent all day trying to free himself from the device.
It took about 45 minutes for firefighters to release the man, from the device. By this time he had slipped in and out of consciousness due to the pressure of the chastity belt on his genitals.
"He was very embarrassed about the situation. He was very apologetic and seemed to be wishing he wasn't there."
Three machines were needed to cut through the titanium.
"The man had lots of swelling in his genital area," said Mr Healey. "It took a long time to release him because he was in a lot of pain, and we needed to give him oxygen.
"His girlfriend initially seemed to find it funny but became more concerned as his condition got worse.
.
Ala. police nab Mercedes-climbing goat
The goat was arrested, the Mercedes-Benz was assaulted and the dog came along for the ride.It happened Sunday when a woman driving the Mercedes saw a goat and dog playing on U.S. 72 in northern Alabama, Sheriff Mike Blakely said. She stopped, afraid they would get hit, Blakely said. But the goat jumped on the car and wouldn't come down. Fearing scratches and dents in her import's paint job, she called the Limestone County Sheriff's Department. A deputy got the goat down and put it in his patrol car, but then the dog jumped into his back seat too.
The deputy took the dog to a veterinarian and the goat to the home of another deputy. "If anybody is missing a goat and dog, they need to let us know,"
.
The boy who could one day die laughing
Most mothers hope their child's life will be filled with laughter - but for Lucy Hoggan, the sound of her son's giggles fills her with dread.
Lucy's son three-year-old Cadell has a rare form of epilepsy that causes strange laughter fits, which could one day kill him.
'It happens about ten times a day, at the most inappropriate times. One minute he'll be serious or relaxed the next he'll be manically laughing. Afterwards he cries or wants a cuddle and some reassurance.'
Cadell's epilepsy is caused by a benign tumour in his brain. Doctors have warned his family he will one day need an operation to remove the tumour. If the fits are allowed to carry on too severely, Cadell may one day kill himself laughing.
'Even as a tiny baby he used to laugh a lot for absolutely no reason,' said Lucy.
'When he was just ten-weeks-old at my grandfather's funeral, he burst into fits of laughter for several minutes.
'We thought it was odd - but maybe he was just a giggly little boy.'
.
Sex Offender Law Makes Homelessness a Crime
A strict new Georgia law is designed to keep sex offenders away from children by monitoring how close they live to schools, parks and other spots where kids gather -- and threatens them with strict penalties if they fail to register.
But what about the offenders who don't have an address?
Georgia's Supreme Court on Monday considered whether the law unfairly subjects homeless offenders to a life sentence if they fail register a home address.
The case involves William James Santos, a homeless man and convicted sex offender who was kicked out of a Gainesville homeless shelter in July 2006 and was arrested three months later on charges he failed to register with Georgia's sex offender list.
Posted by The Man at 7/08/2008 No comments: