Woman sold inmate's car
Police said a 19-year-old woman took the vehicle of a Johnson County Jail inmate and sold it along with many of his possessions including laptop for $150.
According to police criminal complaints, the victim, who is not identified, was arrested at Menards. Police said the man was to be incarcerated for 42 days.
During that time, Daisha R. Adams, address unknown, took possession of the man's 1993 Buick Regal Custom, forged his name on the title and sold it for $150. According to Kelly Blue Book, a Buick Regal Custom with 150,000 miles in fair condition is worth more than $800.
Police said the man's laptop computer, iPod, gaming system, EBT card and several items of clothing were in the car and reported stolen. Police said when forged the signature of the victim, she misspelled his middle name. remains in the Johnson County Jail on a $20,000 cash-only bond.
Man stole doughnut delivery truck
Police in said they arrested a man who said he stole a doughnut delivery truck from a Wal-Mart parking lot because he was tired of walking.
police said they responded to the scene of a reported collision between two vehicles Thursday and one of the drivers, Randall Roberts, 20, of , told them at the scene he had taken the doughnut truck from a parking lot in .
Roberts told investigators he took the truck, which had been left unlocked with the keys in the ignition, because his feet hurt from walking and he "needed somewhere to sleep."
Police searched the truck and found 338 boxes of Krispy Kreme doughnuts and 10 grams of marijuana.
Roberts, who denied ownership of the cannabis, was charged with grand theft auto and possession of marijuana less than 20 grams. He was taken to the Marion County Jail.
.

Driving mower without license
A court tossed out a $50 fine for a man accused of driving without a license when he rode a power lawnmower from one job to another.
Circuit Court Judge Rodham Delk threw out the fine levied against Leslie Dildy, 35, ruling Monday a riding lawnmower is considered a "farm tractor" under state law, meaning no driver's license is required to operate one.
Dildy was stopped while driving the mower from the scene of a lawn-mowing job to another home and issued a summons for driving without a license. He was fined $50 when he appeared in General District Court.
.
Woman crashed car while brushing her teeth
A teacher who crashed her car while brushing her teeth told police she had lost concentration.
Cherie Margaret Davis, 65, who was treated at for her injuries after a crash, had also been drinking, Blenheim District Court was told yesterday.
Sergeant Graham Single said was driving toward Picton when she set the cruise control of her car at 100km/h, "got out her toothbrush and started brushing her teeth".
After veering to the left, she over-corrected and crashed into a rock bank on the right side of the road. Her blood alcohol level was 135mg. The legal limit is 80mg.
.

man charged after barking at police dog
Police say a Mason, man has been charged with a misdemeanor for barking at a police dog.
A police report says 25-year-old Ryan James Stephens was charged with teasing a police dog in the suburb of Mason.
Officer Bradley Walker wrote that he heard the K9 dog barking uncontrollably inside his patrol car while he was investigating a car crash at a pub early Sunday morning. says Stephens was making barking noises and hissing at the animal.
reported that Stephens said "the dog started it" when asked why he was harassing the animal. The officer said Stephens appeared highly intoxicated.
..
Posted by The Man at 4/06/2011 1 comment: 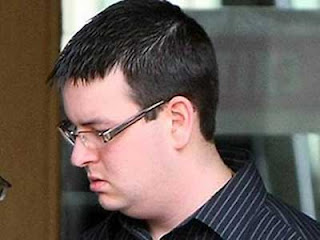 Scissors left in woman for three years by surgeons

The routine op should have been a snip - but Veronika Cruz, 35, was left in agony for three years after bungling surgeons left a huge pair of scissors inside her.
The surgeons had left the eight-inch long scissors behind during an operation to remove her ovaries in .
. 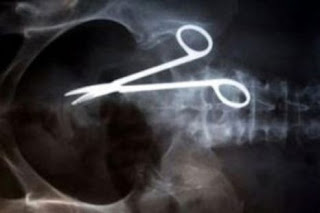 .
But doctors dismissed her complaints that something was wrong until she collapsed in agony years later and this X-ray revealed the truth.
A spokesperson for the medical council said: 'There was damage to her intestine and her other ovary, which had to be removed. We are investigating.'
.
Posted by The Man at 4/06/2011 No comments: