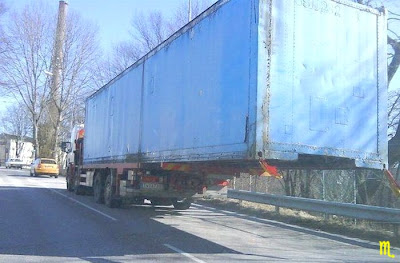 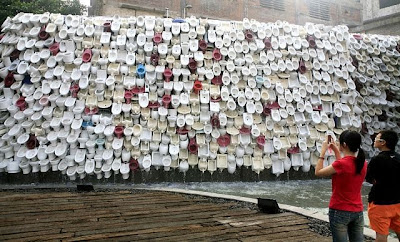 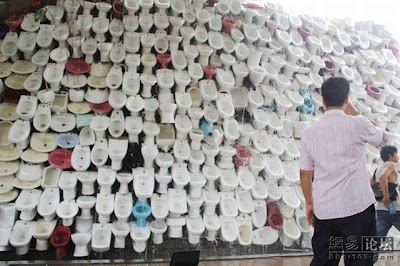 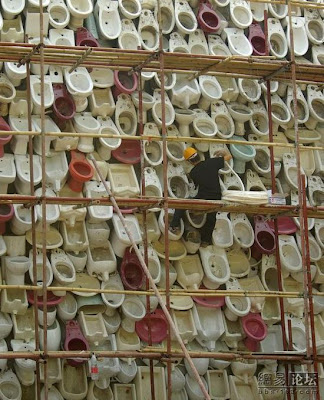 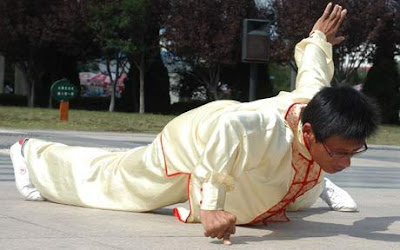 Bingli – who has been studying martial arts for 32 years since the age of just seven – can stand upside down supporting himself on just one index finger.
On Monday he scooped the Guinness world record for completing 12 press ups on just one finger of his right hand.
"I've been training since I was seven years old and my index finger has as much strength in it as most people's entire body," said Fu of Lianyungang, eastern China.
Posted by The Man at 10/24/2009 No comments: 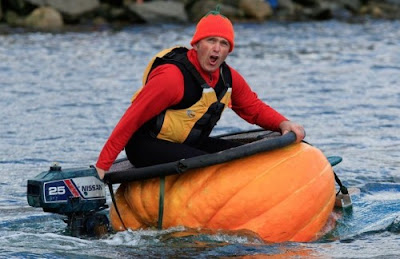 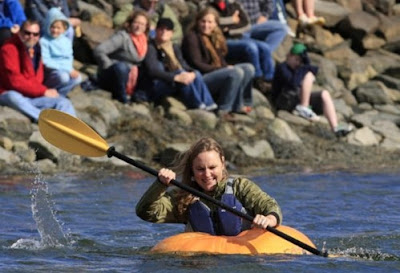 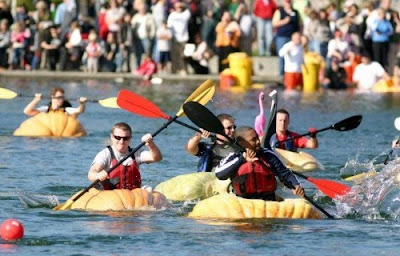 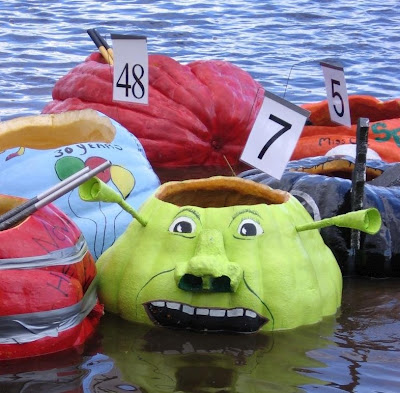 Shopowner Strikes Back With Shock Tactics 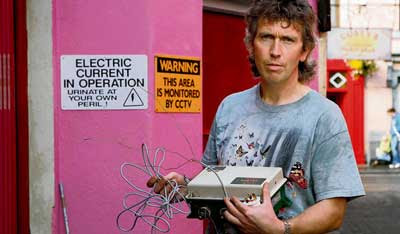 John O’Connor has installed a device at Custy’s Traditional Irish Music Shop that will give anyone who relieves himself on the premises an electric shock.
He also put up a sign warning ‘Electric Current in Operation – Urinate at Your Own Peril’ to let revelers’ know of the consequences of what he called "al-fresco urination".
The music shop is located on Cooke’s Lane off Ennis’s main street, O’Connell Street and Mr. O’Connor described installing the electric shock treatment as "total desperation".
"I hate having to do this, but I’m not willing every Monday to be confronted with human detritus where I have to clean up human feces, urine and vomit. Sometimes it can take 40 minutes to clean it all up."
He said last Monday was particularly bad when the urine seeped into the building.
.
Posted by The Man at 10/24/2009 No comments:

10-year-old girl got gassed at party
A furious mother yesterday claimed her 10-year-old daughter was sprayed in the face with CS gas by police who raided a birthday party.
Abbie Symonds spent five hours in hospital being treated for swollen eyes.
They arrested her step-brother Robert, 20, on suspicion of breaching his bail curfew. He was dragged from the garden in handcuffs but a court later threw out the case for lack of evidence.
Officers in riot gear also arrested Abbie's dad Nigel,50, and birthday boy Nigel for alleged public order offences during the raid in the quiet cul-de-sac on Saturday.
Careworker Delia said: "I asked why they used the gas and they told me that if officers felt threatened they could use it without warning. But how is my 10-year-old a threat to a fully grown policeman? I think it is disgusting.
.
Man prefers prison to house arrest with wife
A Sicilian builder transferred from prison to house arrest tried to get himself locked up again to escape arguments with his wife at home.
Santo Gambino, 30, did time for dumping hazardous waste before being moved to house arrest in Villabate, outside the Sicilian capital, Palermo, Italian news agencies reported.
Gambino went to the police station and asked to be put away again to avoid arguing with his wife, who accused him of failing to pay for the upkeep of their two children.
Police charged him with violating the conditions of his sentence and made him go home and patch things up with his wife.
.
Store clerk ran off with $1M lottery ticket
A 25-year-old Austin, Texas convenience store clerk pocketed a customer's $1 million winning lottery ticket, claimed the prize and skipped town, possibly back to his native Nepal, authorities said.
Pankaj Joshi took 67-year-old Willis Willis' winning Mega Millions megaplier ticket after Willis asked Joshi in May to check whether any of his numbers were winners, investigators said in a search warrant affidavit last month.
Joshi claimed the prize — about $750,000 after taxes — at the lottery claim center in Austin, had the money wired to a bank account and disappeared, authorities said.
.
You won’t take me alive
A convicted sex offender burned to death when he set himself on fire as authorities served a warrant at his rural Tulsa County home Thursday.
Law officials went to a house in the 14100 block of East Apache Street to contact Johnnie Joe Hobbs, 47, Capt. John Bowman said.
After finding the house empty, the squad peered into a cargo van that sat in the cluttered yard about 3 p.m. Hobbs, who was inside the van, reached out and slammed the door shut, Bowman said.
He then doused the van with gasoline and ignited it, Bowman said. Medics pronounced him dead at the scene.
Bowman said Hobbs had spent time in prison and had indicated that he would do anything to avoid capture.
..
Posted by The Man at 10/24/2009 No comments: