A woman has been arrested for refusing to stop talking on her phone while traveling in a train's quiet carriage.
. 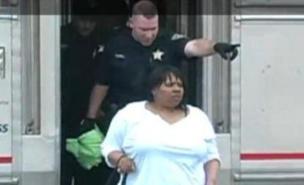 .
Lakeysha Beard was speaking loudly on her mobile phone for 16 hours on the journey between , , and .
It seems passengers complained to train staff about Beard's chattering, but time and time again the 39-year-old chose to ignore requests for her to be quiet.
Beard then said to have been involved with a 'verbal altercation', resulting in workers for train operator Amtrack calling police to come and remove her.
The train was called to a halt at a crossing just outside , where cops boarded to remove the talkative traveler. She has now been charged with disorderly conduct.
Ms Beard said she felt 'disrespected' by the incident. She admitted to talking on her phone, but saw no reason why she should have been escorted from the train.
However, while 16 hours seems a long time to be talking on the phone, Beard still came nowhere close to the current world record.
Sunil Prabhakar of Kailash Hills New Delhi recorded a 51-hour call in September 2009, smashing the 41-hour record set by British man Tony Wright in 2007.
.
Posted by The Man at 5/18/2011 No comments:

Found wallet leads to owner's arrest
A Good Samaritan turning in a lost wallet isn't always good news for the owner.
An 18-year-old man has been arrested after someone found his wallet and turned it in to authorities -- who say they found three other men's identification cards inside.
Sheriff Larry Fowler says deputies also found drugs in the teen's car.
The Aledo man has been charged with fraudulent use or possession of identifying information, and possession of a controlled substance and marijuana. Stewart was released Monday after posting $8,500 bail at the Parker County Jail in Weatherford, about 30 miles west of .
.
Man arrested for tp toss during graduation
Police said a student was arrested after trying to "lighten up" a graduation ceremony by throwing toilet paper into the crowd.
Investigators said Robert Koehler, 22, who was not graduating, was arrested after tossing toilet paper into the crowd of students during the University of Iowa College of Liberal Arts commencement.
Koehler said he was trying to "lighten up the erroneously long graduation ceremony and stimulate a unified celebration for all the graduates at the commencement."
Koehler has pleaded not guilty to a charge of disorderly conduct.
Video
.
Smile for the Camera
Litchfield Police say it was a smile the teller flashed to the masked robber that helped tip them off that a robbery at New Milford bank was an inside job.
The teller, 21-year-old Serena Viccaro was ordered held on $25,000 bond when she was arraigned in Bantam Superior Court on charges she conspired to commit first-degree robbery and first-degree larceny.
Police say Viccaro and Preston Hanlon, the man that they robbed the Webster Bank, were involved in a relationship, and that both planned the robbery.
They say that when the 28-year-old Hanlon pointed a toy pistol at Viccaro and demanded money, she smiled at him, then handed him $2,100 in cash.
Viccaro denied involvement.
.

Fake doctor used toothpicks on patient
Police in say a man reported someone posing as a doctor used toothpicks for acupuncture and gave him expired medication.
police said the man responded to an ad in a Bulgarian-language newspaper and met with the man claiming to be a doctor at a closed medical clinic.
The victim told police the man used toothpicks to give him acupuncture on his chest and gave him pills labeled "Prosperous Farmer Dietary Supplements," which had expired in February 2002.
The man paid $200 for the appointment, police said.
.

Pee-eww
Man poured bleach on renter's body instead of reporting death, deputies say
Body was discovered 8 hours before authorities were notified, the Volusia County Sheriff's Office said.
A DeLand man who didn't tell anyone that his boarder had died in a room over the garage has been arrested on a charge of failing to report a dead body.
William Hendrix Jr., 55, found the body at 4 p.m. Monday, left it there while he mowed his lawn, then returned to pour bleach on the body to cover the odor of decomposition, the Volusia County Sheriff's Office said Tuesday.
He told deputies he was afraid to report the death because his girlfriend, who owns the property didn't want him to take in boarders, authorities said. The girlfriend called deputies about 12:25 a.m. Tuesday as soon as Hendrix told her about it.
The dead man has been identified as Daniel Ferris, 46. Foul play is not suspected. Hendrix knew Ferris for years and took him in because he was down on his luck, deputies said.
.

While I’m Here Arrest Me
Woman arrested while visiting boyfriend at jail in pot farm case
She came to see her boyfriend, who was being held after marijuana found at couple's Millwood home.
Katherine R. Gurley, 49, was busted while visiting her boyfriend, Michael Wayne Mancil, in jail in .
Authorities had seized at least $1.4 million worth of pot last week at the couple's Millwood home on 33-acres of land they had shared together for four years.
$1.4-million worth of pot is a whole lotta weed.
Deputies found it everywhere: Pot packaged and ready for sale, plus live plants from seedlings to mature weed. Pot was also growing inside the couple's home.
‘She said she had no idea that [marijuana cultivation] was going on out there,’ Sheriff Randy Royal said.
.

Sears employee wore stolen boots to work
An employee at Sears in DeSoto Square Mall reportedly got caught wearing evidence that he shoplifted.
Sheriff's deputies say the 18-year-old worker was seen on surveillance stealing a pair of boots earlier this month.
A supervisor said the employee was also seen on surveillance tape wearing the stolen boots to work.
When searched by a deputy, the employee reportedly had a handgun concealed in his boot.
The man, who allegedly admitted to stealing two pairs of boots from the store, faces charges of retail theft and carrying a concealed weapon.
.
Posted by The Man at 5/18/2011 1 comment:

Autumn Braden, 19, claims she did it to 'see how eBay worked' and it 'wasn't meant to be taken seriously'.
. 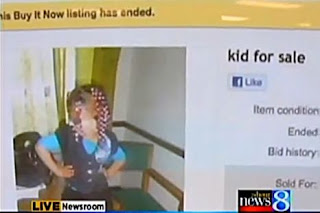 .
She wrote on the eBay post: ‘An adorable child for sale can clean and hold a decent conversation very lovable but I just out grew her.’
The teenager had been caring for the child at the time. The girl is now with her mother.
Police tracked Braden down in , about 15 miles west of , after being alerted of the auction.
According to sheriff's Lieutenant Mark Bennett police received calls about the internet posting from as far away as , some 2,000 miles away.
One bidder who thought it was a hoax called police when the bid was accepted and helped lead them to the woman, Lt Bennett said.
.
Posted by The Man at 5/18/2011 No comments:

Mentos & Coke Rocket What a Shot

But you gave it to me