Don't know what to get your pet for "CHRISTMAS"

Get your pet this great-lookin' Cone Collar this year. 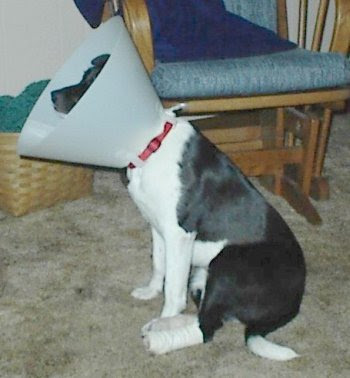 It’ll block him/her from all that disgusting licking and stuff......
and, say, it's fashionable for kitty, too.
. 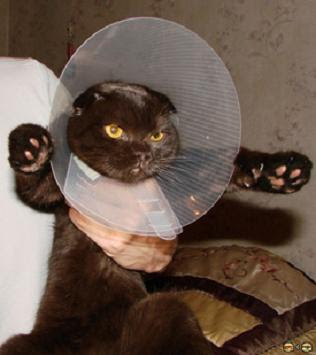 But teaching any dog to hump your leg looks pretty easy.
Posted by The Man at 12/20/2007 No comments:

The world's only bar that's inside a tree 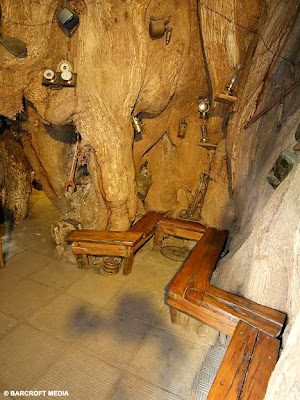 It has been created in a huge 72ft high tree in this garden in Limpopo, South Africa, to keep thirsty locals happy. The tree even has its own cellar, with natural ventilation to keep the beer cool.

The huge tree, in the grounds of Sunland Farm, is so wide it takes 40 adults with outstretched arms to encircle it. Carbon-dating, which can determine the age of organic materials, has shown the anicent tree is about 6,000 years old. "This tree is likely to be older than the Giza Pyramids of Egypt," said Heather van Heerden, owner of Sunland Farm. With more photos.
Posted by The Man at 12/20/2007 No comments:

Labels: Food-Drink, In The News, Pictures

There's "NO WAY" she can drive 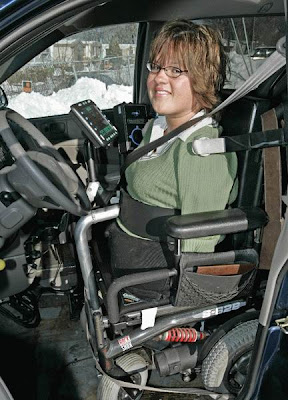 Blue man seeks acceptance
His name is Paul Karason, and he's blue. It's not makeup or paint. 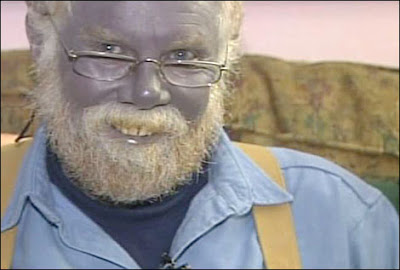 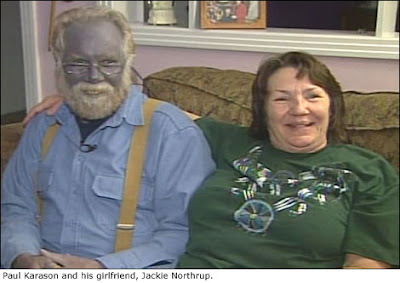 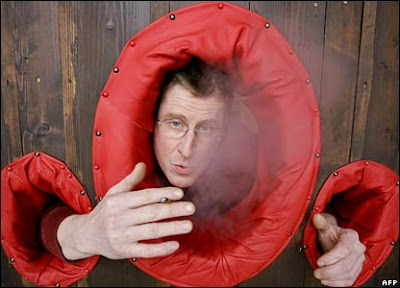 A man smokes through a "Smoking Point" in a restaurant wall in Goslar, Germany.
The holes have been made after a smoking ban in restaurants in Lower Saxony.
Posted by The Man at 12/20/2007 1 comment:

Who says animals don't know how to romance? 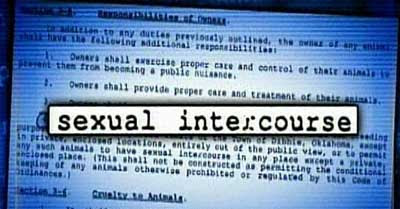 Some "goats gone wild" are the talk of a small Oklahoma town.
A woman received two tickets after her goats were caught mating and relieving themselves on her own yard.
City law said it is illegal for any two animals to have sex in public within Dibble city limits. It's also against law for them to relieve themselves in public even if the animal is fenced in on private land. The owner was shocked when she heard the charges.“I kind of thought if anyone was caught having sex in public, it could have been me,” Carol Medenhall said. With news video.
Posted by The Man at 12/20/2007 No comments:

You won't find this at your local Wal-Mart. 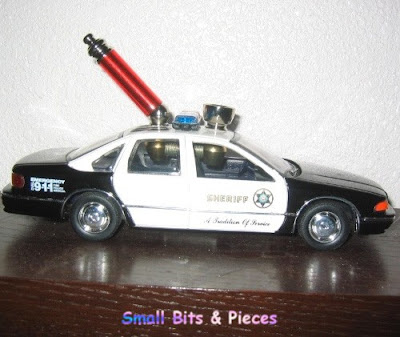 Car thief scared off by large dog in his rear-view mirror
A thief who stole a car after spotting the keys in the ignition swiftly abandoned it when he was confronted by a great dane that had been asleep on the back seat. The man was unaware that Diesel, an alsatian cross, was inside the Toyota 4x4. As he drove off he saw the dog, 9st (57kg) and 6ft tall on his hind legs, through his rear view mirror. As soon as Diesel sat up, the man stopped the car and fled. Police found the car outside Brixham Rugby Club, Devon, only 30 yards from where it had been taken. The owner, Nick Griggs, 41, of Brixham, who runs a quad bike centre, said: “I’d love to have seen the look on his face when he saw Diesel.
.
Dr. takes cell-phone photo of patient's genitals
A Mayo Clinic Hospital surgeon in training used a cellphone to photograph a patient's genitals during surgery and now may face disciplinary action and a patient's attorney. Dr. Adam Hansen, chief resident of general surgery at the Phoenix hospital, admitted to Mayo administrators he snapped the photo during a Dec. 11 gallbladder surgery on patient Sean Dubowik, whose penis bears the tattooed slogan, "Hot Rod." » Read the full article here

Son's Parties Is No Laughing Matter
The mother of a 13-year-old boy has been arrested for supplying nitrous oxide, or laughing gas, used during her son's ditch parties at their Lake Elsinore home.
Maria Antonia Mendez was arrested for providing the gas used by the teens to get high. Riverside County sheriff's Sgt. Evan Petersen says the teens skipped school and hung out at the home. Click Here To Read More

Hey, Where Did All That Cash Come From?
It wasn't until a store manager and others helped a man round up money blowing around an auto parts store parking that something started to seem fishy.
"We were all joking with him, 'Where's the dye packs?'" said Amy McCaulley, manager of the AutoZone store in Boulder City, told the Las Vegas Sun for a Wednesday report. She referred to devices that banks bundle with cash in a robbery to mark bills as stolen.
Click Here To Read More
.
Cash-happy ATM lands man life in prison
A man in China's southern city of Guangzhou has been jailed for life for taking funds from a malfunctioning ATM, local media reported on Tuesday.
In April last year, Xu Ting let his friend in on his secret that the ATM deducted only 1 Yuan from his account for every 1,000 Yuan withdrawn.
"Xu subsequently withdrew 175,000 Yuan (12,000 pounds) in 171 transactions while Guo withdrew 18,000 Yuan," the Beijing News reported.
Guo was jailed for a year after turning himself in while Xu remained on the run for a year before being apprehended and sentenced to life for theft.
The sentence has sparked an outcry from local media.
"Sentenced to life for unexpectedly discovering an ATM's malfunction and enticed into committing a crime is too harsh," the Beijing News said in an editorial.
Xu's lawyer said the ATM was the responsibility of the bank and it had had ample time to recover the lost funds. Xu's actions should come under the lesser charge of embezzlement, it added. Xu has appealed against his sentence.

Australian man drove drunk 'to escape mosquito attack'
A drunk driver caught behind the wheel at nearly five times the legal limit said he drove to avoid a mosquito attack. Stephen James Diggs, 30, made the "stupid decision" to drive with a blood alcohol level of 0.236 per cent because "sand flies and mosquitoes" where he was fishing with a mate were "absolutely horrific", a Darwin court heard. Because "they'd run out of Aerogard" and had drunk many beers, which "didn't even help", he "took the risk" and drove home with his dogs and gear, only to be caught by police. Diggs pleaded guilty to drink-driving in the Darwin Magistrates Court yesterday and driving without a licence.
Posted by The Man at 12/20/2007 No comments: