Geese given police escort
A Canada goose and her goslings were escorted from a busy highway in by police in three different police cars
state troopers helped the gaggle to safety after motorists alerted the authorities to their presence on the busy road during the morning rush hour.
Officers closed two lanes of traffic while they guided the Canadian geese to a highway exit.
The operation took around 20 minutes, according to patrol spokesperson Julie Startup.
VIDEO
.

Woman puts up $7,200 to aid female customers
A woman with a foul mouth, fat wallet and dislikes men bought $7,200 worth of clothing for more than 50 women at a discount store in .
Sixty-six-year-old Claudia Smith showed up at the Everything a Deal store in on Tuesday night and bought $2,200 worth of clothing for just a few customers.
She lived in , for several years and wanted to buy things for poor Mexican women.
Hundreds of women arrived at the store in the morning and waited until Smith showed up at 4 p.m.
After her $5,000 check cleared, the store allowed 50 women to spend $100 each.
Some women blushed at the profanity Smith used to criticize men and dispense nonsensical advice.
.

Man opens wrong door finds pounds of pot
Authorities say a condo owner who opened the wrong garage door by mistake found a drug stash that put two of his neighbors behind bars.
Benjamin Bingham and Nicholas Mann entered not guilty pleas Monday in Kenton Circuit Court to conspiracy to traffic in marijuana.
Police said their neighbor, Mike Finke, had just purchased a condo in the complex and went to clean out the unit's garage. When the key jammed and the lock pulled out of the wall, Finke opened the door and found two duffel bags and a suitcase containing 48 pounds of marijuana.
After Finke called police, he realized he was in the wrong garage.
Police say the garage belongs to Bingham and Mann.
.
People using new fountain as toilet

Officials in , turned off the water at the city's new waterfront fountain over the weekend, because people have been using it as a toilet.
The fountain was activated last month and features a sculpture of a whale's tail with water spilling over it, which visitors are encouraged to run through.
City Councilor Michael Buscetto III said that since the fountain opened, police have responded to calls of people urinating, defecating and showering in the fountain water. He said some people who have cut themselves have also used the fountain to rinse off blood.
.
Posted by The Man at 6/09/2011 No comments:

Police are looking for two women caught pocketing 75 sticks of deodorant from the Winn Dixie in . Police say two women cleared out the deodorant shelves at the Winn Dixie, but only stealing Secret and Gillette brand deodorants. Police say they have seen schemes like this before in . They say it is possible there are convenience stores that have people steal from a larger store and give the thief a cut of the money. Police say it is quick cash for the suspects and cheap goods for the stores. In this case, the deodorant sticks could sell for $300.
.

“Red Bull” makes you insane at least for Stephen Coffeen

A man who admits he killed his own father will see no jail time after a judge found him not guilty by reason of insanity.
An expert has said drinking Red Bull was one of the things that led to the crime.
Stephen Coffeen admits he smothered his father Robert with a couch cushion two years ago. He originally claimed was he was defending himself. His defense was temporary insanity.
.
.
Judge Nancy Moate Ley accepted a deal worked out between his lawyers and the State Attorney's Office. Under the deal, in six months, Stephen Coffeen could go free.
"The defendant is found not guilty by reason of insanity due to mental illness," Judge Ley said, after explaining she had no choice but to send him to a mental hospital instead of putting him on trial.
.
Posted by The Man at 6/09/2011 No comments:

A 39-year-old businessman collapsed in court after the judge ignored his pleas for leniency, instead sending him to state prison for eight years for scamming three boaters. Christopher Coomes had until Tuesday to pay $70,000 in partial restitution a deal that would have staved off prison. 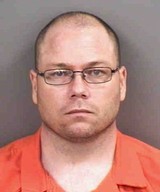 .
It was his last chance after his plea deal and he’s already been given a four-month extension. But all he had to show for his efforts was a text showing a photo of his aunt’s $20,000 deposit into defense attorney Michael Beal’s trust account at 8:45 a.m. — and there was no proof it would clear.
Collier Circuit Judge Frank Baker cut him off. “Without being mean to you, we’re here for sentencing,” Baker said.
Coomes’ wife, Erin burst into tears, followed by their young daughter, Julie. Holding her baby and her young daughter’s hand, Erin Coomes walked toward her husband to say goodbye.
But he dropped to the floor, gasping as Julie cried, “Daddy.”
Coomes lay on the floor heaving as Collier County Sheriff’s Office Cpl. Walter Solomon pumped his chest and Erin Coomes and her children cried.
Coomes took in deep breaths as Solomon urged, “Breathe.”
The judge tried to reassure Coomes he hyperventilated, telling Solomon,
.﻿
Posted by The Man at 6/09/2011 No comments: