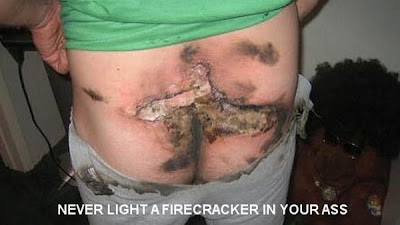 .
Jeannie said...
GROSS!
Thanks for the pics. I check you out daily...
.
I think this was one of those bottle rockets pictures that was going around a year or two ago. Either way it wasn't the smartest thing to do.
I wonder how long it was before he sat down?
.
Posted by The Man at 1/06/2009 No comments:

It’s not to late

Ladies you still can be a virgin again (Yeah Right) 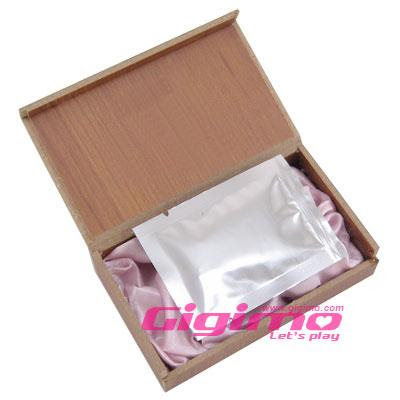 No more worry about losing your virginity. With this product, you can have your first night back anytime. Insert this artificial hymen into your vagina carefully. It will expand a little and make you feel tight. When your lover penetrates, it will ooze out a liquid that look like blood not too much but just the right amount. Add in a few moans and groans, you will pass through undetectable. Its easy to use, clinically proven non-toxic to human and has no side effects, no pain to use and no allergic reaction.
.
Posted by The Man at 1/06/2009 No comments: 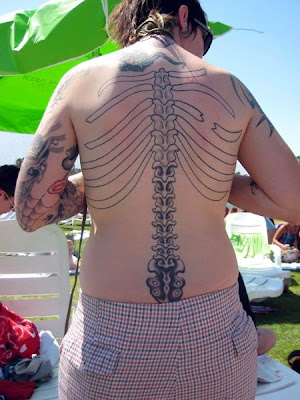 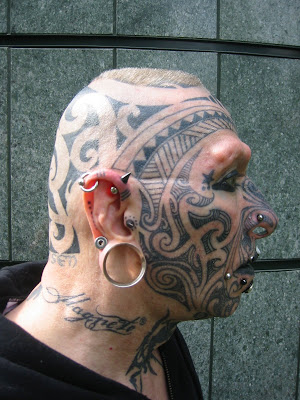 Getting caught with your pants down 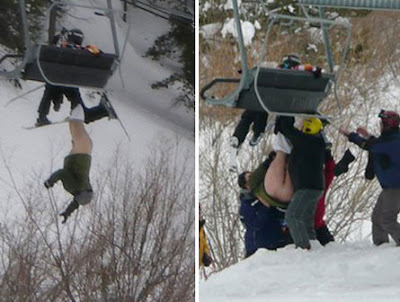 On Tue, Jan 6, 2009 at 1:23 PM, Jaderlund, David wrote:
why post the Today's funny?
the cartoons aren't funny, and are definitely not of the higher brow humor on the rest of the site. It looks like something from a Texaco station bathroom wall.
Do you owe the guy providing them money?
.
I throw in different things to see if someone might comment.
I do Small Bits and Pieces without any advertising so that means I don't get paid for the hours I put in every day. So I try to get people to comment more to make it so I have a reason to continue so please comment.
.
Anonymous said...
Hey man, I love your site, its one of the only ones I check throughout the day to keep me from going insane at work.. Thank you for updating it so regularly and a big Thank you for posting awesome stuff..
.
See it's not hard to do and it takes so little of your time to do it.
.
Scheme said...
Holy crap this is one of my favorite sites, too. What balls it took for that schmuck to criticize! Well, actually, I'd like to see more kittens-between-boobies pictures myself..
.
That is why I ask for comments so I can post things that people would like to see.
I see if I can find kittens-between-boobies pictures.
.
xunilhr said...
Keep up the great work.
Screw the panty waste dip wads that sit in the dark corners of their parents' basement, doing nothing but criticizing those who are doing something they don't have the energy, brain or talent to do.
There are three kinds of people in this world, those that make things happen, those that watch things happen, then the third for this waste, those that wonders what happened.
.
Thanks for the comments
.
.eddy from newswithdrawal blog said...
I love your site!
.
tattoo jim said...
I totally agree with your other fans! What a great site. I'm retired and with the aid of my MacBook, I like to hit a few blog sites. Yours is one of my favorites. The stranger the item the more it makes me wonder about this great experiment called life.
Rock on loud, long and strong!!!!
.
It is nice that you comment on this post however, I would like for you to comment on other posts so I get a idea on what other things you enjoy. This post started out about "Today's Funny" cartoons. Even though they are not "Strange" but do you like them? Otherwise I am trying to give my fans what they want. My main goal is to post mostly "Strange and Bizare" news and pictures however some days there are only a small selection to choose from so I fill in with other things like hot women, jokes and other things of interest. Even though I can not please everyone all the time I like to please everyone most of the time.
That's enough said about this subject.
.
tonytc said...
I have 6 favorite blogs and this is one of them...
Ok I need to comment more...thanks mate from Australia.
.
Posted by The Man at 1/06/2009 No comments:

Upset wife sets her husband's penis on fire
A woman who allegedly murdered her husband by torching his genitals told neighbors "his penis should belong to me", a court has heard.
Lucy Boord, for the Crown, said the 44-year-old had confessed to neighbors that she had set her engineer husband, Satish, on fire upon learning he was having an affair. "She told neighbors 'my husband loves another woman, he hugs her'," she said. "(She said) 'I'm a jealous wife, his penis should belong to me, I just wanted to burn his penis so it belongs to me and no one else. "(She said) 'It's just his penis I wanted to burn, I didn't mean this to happen."
Satish was asleep when his wife doused his genitals with methylated spirit and then set him on fire. A blaze was sparked when he jumped out of bed and knocked over the bottle of spirit, causing $1 million damage to their Cleland Ave townhouse and an adjacent property.
PICTURE
.
Orgasms During Childbirth? It Happens
Regarded as "the best kept secret" of childbirth, women are curious about this seemingly unimaginable experience. How can childbirth possibly be climactic?
"Orgasmic" isn't exactly the first word most women use to describe childbirth. Yet thanks to a new DVD, "Orgasmic Birth," we're learning that birthing has perks beyond the miracle of life. For some women, this includes actual orgasms during delivery.
.
'Nitro' - Steroids Gave Me 'Man Boobs.'
Dan Clark loved the power steroids gave him — until the "American Gladiators" star discovered the muscle-enhancing drugs made him grow man-boobs, shrank his privates and turned sex into a painful experience.
"Man boobs, breast-chesticles is what they're called on the street. Gynecomastia is the scientific name. No matter what you call it, I [had] it," Clark, who was "Nitro" on the smash reality series, reveals in his memoir, "Gladiator: A True Story of 'Roids, Rage and Redemption," out next month. "I hate[d] taking off my shirt. For photo shoots, [I'd] wet my nipple with spit ... [to] look firm instead of hanging down."
As he shot seven seasons of "American Gladiators" from 1989 to 1996, he pleaded with the wardrobe stylist to make him a new uniform, but didn't tell her it was "to hide my budding breasts." He eventually underwent reduction surgery.
Clark, a former LA Rams defensive lineman, used steroids for 20 years. They also took their toll on his private parts, so much so that he embarrassingly had to explain to women what was going on. "My b- - -s never really regained their size. They're kind of shriveled," he sadly told one bedmate. In addition, steroids subjected him to a "dull throbbing pain" every time he had sex.
.
KIDS IN THE NEWS
.
6-year-old misses school bus, takes family car, crashes
A 6-year-old Wicomico Church Virginia boy who missed his bus tried to drive to school in his family’s sedan — and crashed.
State police say the boy suffered only minor injuries and authorities drove him to school after he was evaluated at a local hospital. Sgt. Tom Cunningham says the boy arrived shortly after lunch.
It happened around 7:40 a.m. Monday on Route 360, about 61 miles east of Richmond.
Police say the boy, who wasn’t identified, missed the bus, took the keys to his family’s 2005 Ford Taurus and drove 10 miles toward school while his mother was asleep.
He ran off the road several times before hitting an embankment and utility pole about a mile and a half from school. Police say he wasn’t wearing a safety belt.
.
Text Message Led to Fatal ATV Crash That Killed Toddler
The father of a 2-year-old who died in a weekend ATV crash said he looked down to check a text message while the boy somehow pushed the throttle, prompting the dad to fall off the vehicle before the toddler sustained fatal injuries.
Jackson Moore, 2, of Eureka was riding on a slow-moving all-terrain vehicle that his father, Nicholas Moore, 29, was driving Saturday through a wooded area of Franklin County.
Moore said he had his son in his lap, and was traveling at a speed that allowed his brother Tony, a paramedic, to walk along side them. The father said he looked at his cell phone and then tumbled to the ground, apparently when the child hit the throttle before the ATV ran into a tree.
"He was out of sight and I heard the boom," said Nicholas Moore. "I don't know how he held on." The child was not wearing a helmet.
Tony Moore performed CPR, but the boy was pronounced dead a short time later at St. John's Mercy Hospital in Washington.
Nicholas Moore also said his son had fired a .22-caliber rifle for the first time at a friend's farm earlier in the day.
Moore said he questioned his decision to allow his son on the ATV, and to be distracted by his phone, but he said he had been being careful.
.
Angry Ohio Boy, 4, Shoots Baby Sitter With Shotgun
Police say an angry 4-year-old Jackson Ohio boy grabbed a gun from a closet and shot his baby sitter.
Eighteen-year-old Nathan Beavers was hospitalized Sunday with minor wounds to his arm and side after the shotgun attack. Police say another teen was also injured.
Witnesses told police the child was angry because Beavers accidentally stepped on his foot. Beavers was watching the child at a mobile home in Jackson with several other teenagers and several other children.
Jackson County Sheriff John Shashteen says authorities are investigating. The child has not been charged.
.
Posted by The Man at 1/06/2009 No comments: