Man gets jail time for bringing beer to court
Authorities say a Monticello, New York man appearing before a judge on a felony drunken driving charge arrived at court an hour and a half late, drunk and carrying an open can of beer.
Sullivan County Deputy Sheriff Eric Chaboty says Keith Gruber of Swan Lake had four unopened beer cans in his bag Monday when he tried to walk through the metal detector at the county courthouse.
Judge Frank LaBuda asked the 49-year-old Gruber if he enjoyed his "liquid lunch." Gruber said he did, and then said he was sorry. The judge revoked his bail and sent him to jail, where he remains.
.
Boy claimed shooting to cover up torn pants
Salt Lake City Police say a 14-year-old teen from Salt Lake City, Utah was trying to cover up for falling and ripping his new pants when he reported a bullet grazed him.
South Salt Lake police Sgt. Mikael Wersland said that the teen reported the shooting. Police say 10 people were questioned and told the police they did not hear any gunfire in the area at the time.
Wersland says the boy "fell down and tore the knee" of his pants, but lied about being grazed by a bullet because he didn't want to get into trouble. The sergeant says the teen only suffered a "scrape where he fell down."
The boy’s identity has not been released. It was not immediately known whether he would be charged with any crime.
.
Boston turns Restroom into Eatery
A former public restroom in an historic Boston park is being turned into a sandwich shop.
Don't get grossed out. The 660-square-foot "Pink Palace" on Boston Common built in the 1920s hasn't been used as a restroom in decades.
City officials announced they have agreed to a 15-year lease with the Florida-based Earl of Sandwich chain for a takeout operation at the site. The goal is to open the shop later this year or early next year following renovations.
.
Church Lottery
A Hamilton, Ohio church that gave away $1,000 to fill more pews last Easter Sunday says it will do it again this year.
Lindenwald Baptist Church in Hamilton draws names to award $500 each to a member of the congregation and a guest.
Pastor Randy Moore says the southwest Ohio church had hoped for 1,000 worshippers last year, when it made the offer for the first time. It packed in 1,140 - more than double the usual Sunday attendance of around 500. Moore says a crew had to direct traffic in the parking lot.
Easter falls on April 24 this year. The pastor says given the economy, the church will continue the cash giveaway to provide a financial as well as a spiritual blessing on the holiday.
.
Posted by The Man at 3/23/2011 No comments: 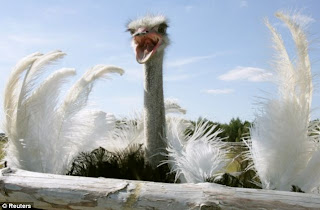 An ostrich stolen from a farm in Romania showed homing pigeon skills after managing to escape from her captors to run all the way home at 40mph.
The big flightless birds, native to Africa, are famous for their ability to run at high speeds but are not so well known for their homing skills.
But one lucky ostrich in Romania managed to navigate all the way back home after being stolen by rustlers.
Owner Florin Diaconescu, 47, was very relieved to see her return back to the farm and was amazed at how she had managed to return by herself.
'I had given her up as gone forever,' he explained.
'But I saw this cloud of dust heading towards the farm and she came running into the yard as fast as her legs would carry her.'
.
Posted by The Man at 3/23/2011 1 comment: