Preteen Filippino boys queued in their hundreds for a daylong 'circumcision party', which officials hope will earn their city a place in the record books.
Some boys cried in their mothers' arms while others bit their shirts to stifle sobs as doctors carried out the surgery on dozens of makeshift operating tables in a stadium in city, east of .
Outside, other boys lined up to await their turn.
. 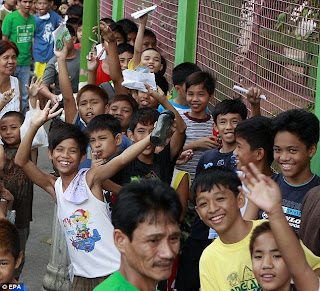 .
In the , circumcision is a rite of passage most males undergo as preteens.
Young Filippino boys are traditionally circumcised during their school summer break from March to May.
“I'm a big boy now,” bragged one boy who had just finished the surgery.
. 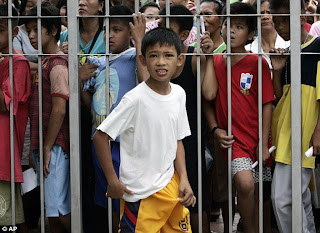 .
Officials said the event - touted in local press as a 'circumcision party' - aimed to promote safe circumcision.
They offered poor residents free surgery that would otherwise cost at least $40 (£25) in private hospitals.
In rural areas, the surgery is sometimes performed by non-doctors using crude methods.
. 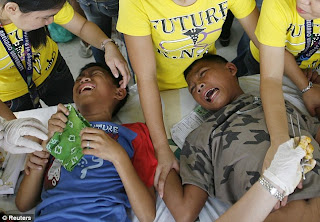 .
city officials hope to establish a world record for the number of people attending a mass circumcision.
The vice mayor, Jose Fabian Cadiz, said: 'We applied for the Guinness Book of World Records and we are recording everything so we can send all the data to them and hopefully it will be recognized.'
.
Posted by The Man at 5/11/2011 3 comments:

“You Were Born Gayer Than a Sweet-Smelling Jockstrap”
.
.
A judge on Monday sentenced a 71-year-old former bus driver to seven years in prison on charges of sexually assaulting boys, telling him, “I think you were born gayer than a sweet-smelling jock strap.”
Delton D. Gorges, a school bus driver for 33 years, was sentenced on counts of sexual assault of a child, repeated sexual assault of a child and two misdemeanor counts of fourth-degree sexual assault.
“I think that if anyone believes that in the last 10 years or 15 years all of a sudden you developed an interest in homosexuality and young boys, then I must have looked ravishing in my prom dress this year,” said Judge Philip Kirk, dismissing Gorges’ claim that he is heterosexual.
Critics said they were concerned about the judge’s comments linking homosexuality with pedophilia.
“Sometimes people don’t say the right thing, but they potentially mean well, “said Andrew DeBaker, co-chair of the gay advocacy group New Pride. “The thing that concerns me is the linking homosexuality, linking being gay with, in this case, child molestation.”
.
Posted by The Man at 5/11/2011 No comments:

A 12-year-old boy attended school dressed in a skirt to protest against “discriminatory” rules which ban boys from wearing shorts.
. 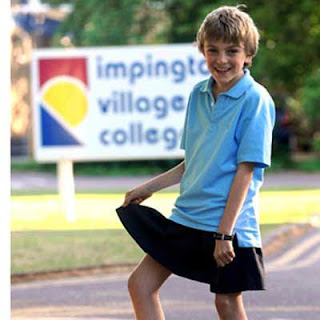 .
Chris Whitehead wore a knee-length skirt to classes in protesting against the school uniform policy which bans boys from wearing shorts during the summer months.
”I will be wearing the skirt at school all day to protest the uniform policy and will be addressing the student council, wearing a skirt.” He addressed 1,368 pupils at morning assembly wearing the black skirt, which boys are permitted to wear due to a loophole in the policy.
. 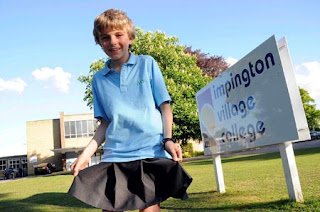 .
Chris believes that forcing boys to wear long trousers during the sizzling summer months affects concentration and their ability to learn.
He said: In the summer girl students are allowed to wear skirts but boys are not allowed to wear shorts.
Headteacher Robert Campbell said the ban on shorts was imposed following consultation with students, teachers and parents in 2009. Ultimately the boys can wear a skirt to school because it doesn’t say they can’t in the uniform policy and we would be discriminating against them if we did not allow it.”
.
Posted by The Man at 5/11/2011 No comments:

Pinellas deputies say Mark C. Sirben got drunk, went home, cooked up a snack and passed out on the couch early on Friday morning. The trouble was, it wasn't his house, his food or his couch. He wasn't even in the right county.
Sirben, 51, Spring Hill, was charged with trespassing in an occupied structure and criminal mischief. According to arrest reports a married couple was sleeping in their home in when the wife awoke to the sound of coughing at around 2:30 a.m.
. 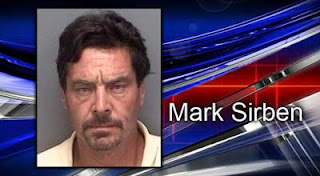 .
The woman went to investigate and found Sirben asleep on her couch. She woke up her husband, who went to the living room and confronted Sirben. Sirben argued with the husband, telling him that he lived there, before he passed out again. "They had no idea who this guy was," said Sheriff's Office spokesperson Cecilia Barreda.
When a deputy arrived, Sirben was still asleep on the couch with a plate of food at his side. The couple said Sirben must have cooked something for himself before he fell asleep. "The kitchen cabinets were open and there was food in a frying pan that was not there when he and his wife had gone to bed," Barreda said.
.
Posted by The Man at 5/11/2011 No comments:

Cuffed man escapes the Pensacola Police
A handcuffed man was back in police custody on Monday after officers found him trying to remove his chains at a Home Depot store.
police say the man escaped from police while he was being treated for injuries at an area hospital Sunday following his battery arrest.
The man made his way on foot about one mile to a Home Depot store, where employees spotted the still-handcuffed man looking for tools and called police.
.

Technology helps in busting car theft
Police say an iPhone left in a stolen truck is how officers were able to capture a burglar suspected of multiple auto break-ins in .
Officials at the El Pas County Sheriff's office said 29-year-old Joshua Mitzelfelt stole a truck left unattended and running in a driveway. The owner's iPhone was on the front seat.
The truck's owner began tracking his vehicle's location though a website monitoring the phone's GPS application while updating sheriff dispatchers. Officers spotted the truck about seven miles from the owner's residence and arrested the driver.
Police were able to link items found in the vehicle to other burglaries in the area. Mitzelfelt has been charged with possession of a controlled substance, second degree aggravated motor vehicle theft and first degree burglary.
.

Armed man breaks into home, steals gun
An armed robber broke into a man's house pepper sprayed him and stole a gun before fleeing, police said.
police Lt. Chris Russ said the robber, who was armed with a handgun, entered the home in the 100 block of North Meredith Avenue about 11:20 p.m. and sprayed the victim, before taking his Airsoft gun, which shoots plastic BBs.
The man called police, who searched the home with a police dog but were unable to find the robber.
The suspect is described as a Latino about 5-feet-10-inches to 6 feet tall, 275 to 300 pounds with dark, bushy hair and a trimmed mustache and goatee.
.

The Grand View Topless Coffee Shop in , has been forced to close after its owner posted signs declaring 'boobies wanted'.
. 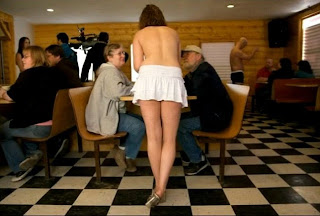 .
The coffee shop originally made headlines after it upset locals when it opened in 2009, with customers served by semi-nude male and female staff.
Despite considerable opposition from locals the shop stayed open until now, when officials ruled its owner Donald Crabtree had been putting up signs illegally.
. 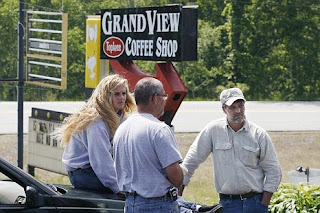 .
I've fought that fight for more than two years now and no matter how hard I try to make this work, somebody sabotages me.
Town officials ruled Mr. Crabtree’s signs which declared ‘boobies wanted’ violated zoning rules.
The controversial coffee shop suffered a difficult couple of years since its opening and was burnt to the ground in an arson attack in June 2009.
It was the threat of legal action over his signs finally caused Mr. Crabtree to close the Grand View Topless Coffee Shop.
.
Posted by The Man at 5/11/2011 No comments:

A 65-year-old man from faces criminal charges after police say he called 911 to solve a beer emergency.

Raymond Roberge called the emergency number three times on Sunday. Authorities say when emergency personnel arrived at his home, Roberge offered them money to go to the store and buy him some beer.
He was charged with misusing the 911 system and was freed after posting a $500 bond.
Police say this isn't the first time Roberge has abused the system. Roberge has used the emergency system 79 times, never for an emergency. Once, he allegedly offered authorities $20 and some loose change to sit with him.
.
Posted by The Man at 5/11/2011 No comments: