The new webcam that could kill off remote controls
It may be called 'gesture interface technology' but it is as simple as waving your hand.
In fact it is waving your hand - and could mean the days of the television remote control (and the days of arguing over who has it) are over.
Scientists at a Toshiba research laboratory in Cambridge have created the technology that allows viewers to operate their TV purely by gestures. 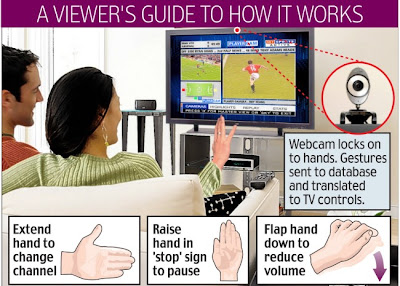 .
For example, raising a hand in a "stop" sign will pause the action on TV.
Flapping a hand up or down can raise or lower the volume.
.
The technology could be customized to suit individuals.
Touching your right ear, for instance, would increase volume, while touching your left ear would lower it. The software could also recognize viewers as they walk into a room and switch automatically to their favorite channel - opening a whole new area for family disputes.

Protester hangs herself from hooks 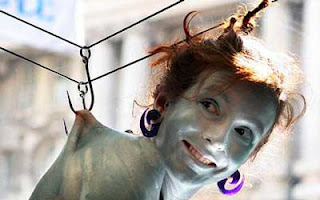 An artist pierced her skin with shark hooks and hung herself from a shop ceiling in protest at the treatment of the animal.
Alice Newstead took the drastic action in protest at the practice of finning – where sharks are impaled on hooks, before their fins are sliced off to harvest meat for shark fin soup. The sharks are then thrown back into the ocean still alive.
A crowd gathered to see the 26-year-old impaled by hooks in her back and gasped as blood trickled down her back.

Labels: In The News, Insane, WTF?

What happens when you don't say "NO" to alcohol 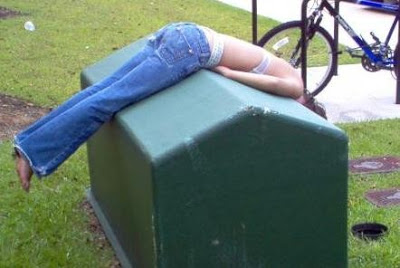 What do you think?
How old is she and what happen to her shirt?
.
At least she is in a good position if she got sick.
.
JOE said...
Hey its Sarah Palin's daughter!
.
So that's how she got pregnant
Posted by The Man at 9/05/2008 No comments:

Lizardman with split tongue opens museum
.
Anonymous said...
Nice video of sideshow performers.
I don't consider them as FREAKS they chose they way they look.
.
They called themself "FREAKS"
Lizardman, from Austin, Texas, showed off the results of his surgery – including 600 hours of work to cover his entire body with tattoos - at a party to celebrate the opening of Ripley’s Believe It or Not in Piccadilly Circus last night.
"I’ve had quite a bit done to my body to become the freak I am today," he said.
He was joined at the event by another human freak known as Stalking Cat, who has had a range of plastic surgery to make his face more feline.
Posted by The Man at 9/05/2008 No comments: 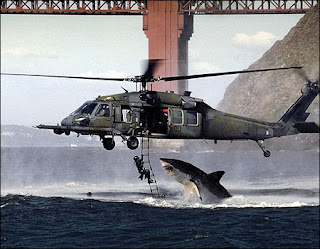 .
.
The doctoring of photos, once considered the reserve of tyrants and UFO nuts, is becoming increasingly widespread.
With photo-editing software becoming ever more sophisticated, and the internet allowing instant distribution, it has never been easier to create and spread hoax images.
.
.
.
.
Shark lunges at helicopter
This striking fake was created by merging two separate images - a US Air Force helicopter on a training exercise in San Francisco, and a great white shark leaping out of the water off the cost of South Africa.
The hoax emerged in 2001, and was later circulated via email with a caption claiming it showed a shark attacking British Navy crew in South Africa, despite the fact that the Golden Gate Bridge is visible in the background.
PICTURES and More
Posted by The Man at 9/05/2008 No comments:

Labels: Computer, In The News

Man accused of making his license plate 'disappear'
New York authorities didn't see this one coming. The Port Authority of New York and New Jersey says the driver of a tractor-trailer rigged the front license plate of his vehicle so that it would "disappear" as he drove through a toll plaza, allowing him to avoid paying the $40 fee.
The Port Authority said driver Orlando Payano ran a cable from the license plate to the dashboard cigarette lighter inside the cab of the vehicle.
Pulling on the lighter flipped the plate under the truck. Cameras are used to capture images of license plates to identify fare beaters.
Police charged Payano with toll evasion and license plate destruction.
.
Man doesn't take rejection well and turns to a wild rampage
A Pasadena, Calif. man has been charged with trying to run down three women who spurned his advances at Newport Beach.
Prosecutors said Wednesday that Bryan Curiel faces life in prison if convicted of several felony charges, including attempted murder.
Farrah Emami, spokeswoman for the Orange County district attorney, says the women rejected Curiel's advances inside a doughnut shop Sunday and told him to leave them alone.
When they had left the shop, Curiel allegedly drove at least 50 mph toward the women and three of their friends before crashing into several concrete benches. One woman's foot was run over as she tried to jump out of the way.
Curiel is being held on $1 million bail until his arraignment Sept. 19.
.
Man Hit by Roller Coaster at California Theme Park
A 20-year-old man was listed in critical condition after he was struck by a roller coaster at Six Flags Magic Mountain Saturday in Valencia.
The man lost his hat on a ride and climbed two security fences to retrieve it, park officials said. That's when he was struck by the Ninja roller coaster and knocked unconscious.
He remained hospitalized Wednesday. No other details were provided about his injuries.
The roller coaster, which reaches speeds of 55 mph, was shut down until state inspectors determine whether the accident was related to the ride.
The man's name has not been released.
.
Son Spots Dad on TV, 5 Years After Family ‘Cremated’ Him
Five years after a British man and his family cremated and held a wake for his dad, John Renehan spotted his father on television, alive.
Renehan’s father, John Delaney, disappeared in 2000. When police found a decomposed body in April 2003, wearing similar clothes and with similar wounds to Delaney, they declared it was him.
A coroner confirmed the police findings and Renehan paid for a cremation and wake. He is now demanding an apology from police for the trauma he suffered believing his dad was dead.
Turns out 71-year-old Delaney had been in a care facility since 2000, after suffering a head injury and memory loss. Unable to give any clues as to his identity, Delaney was given the name David Harrison and placed in a home.
In April Delaney was featured on a TV show about missing persons.
By coincidence, Renehan was watching and recognized his dad. DNA tests confirmed the link and the pair had an emotional reunion two weeks ago.
.
Woman With Suspended License Has Son, 13, Drive
A Gettysburg woman told police she couldn't drive because of a suspended license — so she was a passenger as her 13-year-old drove.
The boy was pulled over Tuesday night when police said he was driving 64 mph in a 40 mph zone in Cumberland Township, Adams County.
Police say the woman faces numerous charges. Her son also faces charges.
.
Heroin addicted elephant clean after rehab
A former heroin addicted elephant has emerged from rehab clean after a three-year detox program
The four-year-old bull elephant appears to have put his years of drug abuse behind him thanks to time spent on China's tropical island province of Hainan.
A year of methadone injections at five times the human dosage helped wean the elephant off heroin.
Gradually, the dosage was reduced until he was completely weaned off the drug.
Referred to as 'Big Brother' or 'Xiguang' in Chinese media reports, the elephant was captured in 2005 in southwest China by illegal traders who fed him heroin-laced bananas.
The traders used the spiked bananas for several months to control him before they were arrested by police.
PICTURE and More
Posted by The Man at 9/05/2008 No comments: