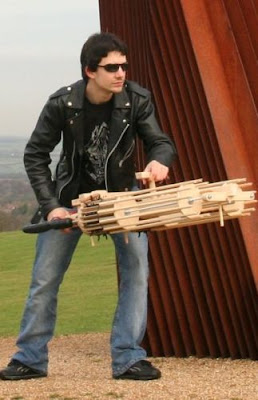 You've gotta admire folks who bring their trade to a whole new level, even if that does mean escalating the international arms race between builders of automated, wooden, rubber band miniguns. The 24-barrel, tripod-mountable monster you see above, lovingly known as the Disintegrator, was rather amazingly hand-carved and assembled by Anthony Smith of the UK, who spent four months on the ambitious build. Unlike your dinky little six-shooter, this model boasts a 288-band capacity and 40-round-per-second firing capability, making it one of the most dangerous weapons to remain unbanned by the TSA. To see this wonder in its full operational glory, you simply have to check out the video.
.
Posted by The Man at 1/17/2008 No comments:

Perhaps the nastiest pizza that you'll ever see in your life 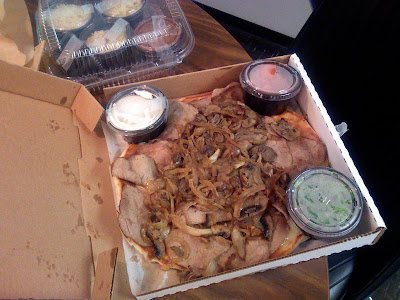 A hum-vee-dinger of a fish tale 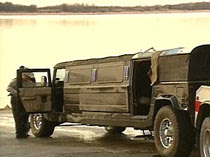 A Sherman, Texas man planned to spend the day at Lake Texoma with his family over the weekend, hoping he might get a big catch. He never expected what he found. His big catch turned out to be a stretch-Hummer limousine.

Bob Faulkner knew he hit something large and had to get it out of the water. When he attached his anchor and tried to remove the object, he pulled in a large piece of vinyl.

He contacted the Grayson County Sheriff's Office, and when deputies arrived, with Faulkner's help, and after four tries, they reeled the vehicle in.

Faulkner says he couldn't believe his eyes as the roof just kept coming out of the water.

He says finding any vehicle in the lake was a shock, but realizing he "caught" a stretch limousine is one catch he says he'll never forget.

The case is still under investigation and police say it was stolen from a local home and dumped. 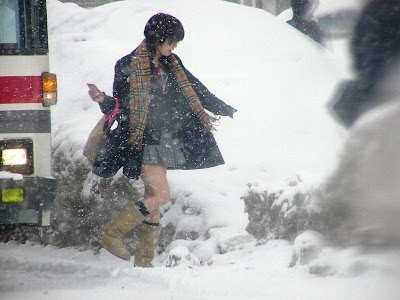 A dog on the edge

This was filmed on Tooting Broadway in London a few days ago.
.
Posted by The Man at 1/17/2008 No comments: 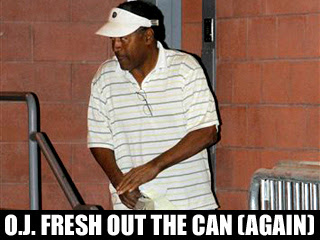 O.J. Simpson walks free from a Las Vegas jail, hours after a judge blistered him for "arrogance or ignorance or both" for breaking bail in memorabilia robbery case. PHOTOS
Woman Sues County for Distributing Her Nude Photos

Armed & Hungry 13-Year-Old Girl Robs Burger King
Tampa Police say a 13-year-old girl who just got out of Juvenile Detention robbed a Burger King Restaurant at knife point. But all she demanded was a cheeseburger.
This happened around 9:30 Friday morning at the Burger King at 2601 E. Hillsborough Ave.
Click Here To Read More

High School Students Traded Nude Pics of Themselves Over Cell Phones
Police are questioning a group of teenagers accused of trading nude pictures over cell phones.
Click here for more on this story from MyFOXUtah.com
Farmington Police Lt. Shane Whitaker says six or so Farmington Junior High School students took pictures of themselves and then shared the naked images.
A parent of one of the kids found the pictures on their child's cell phone and called police. Detectives say the 13- and 14-year-old boys and girls questioned said they took the pictures as a joke, but it's potentially a crime.

14-year-old boy stabs friend in the eye with pen.
A 14-year-old boy was charged with aggravated battery after allegedly stabbing a girl in the eye with a pen. According to a sheriff's report, the boy told authorities that the 13-year-old girl slapped him first. Deputies said the stabbing took place on a bus ride home after school on Monday. Relatives said the girl underwent emergency eye surgery but could have permanent damage to her vision. The boy was transported to the county's juvenile detention center. Deputies said he showed no remorse. » Article here
Posted by The Man at 1/17/2008 No comments: