Man asks cops for help with burglary
A man picked the wrong people to ask for help breaking into a house.
Police say 20-year-old Thomas Everett Finnell approached two police officers who were working out of uniform conducting surveillance in the area and tried to enlist them in going into a house to "steal guns and a TV."
A citation filed in Fayette District Court says officers searched Finnell's home and found a pipe with residue under his bed. Finnell was arrested and charged with first-degree conspiracy to commit burglary and possession of drug paraphernalia.
.

Girl punished after waiting to report sex act
A , woman said that an charter school is punishing her daughter for not immediately reporting that she saw two classmates having sex on a school bus and for changing her seat during the bus trip.
Saundra Roundtree said that her 14-year-old daughter told her she changed seats with a boy who wanted to sit beside another girl on a Dayton View Academy school trip last month and then saw the two having sex.
The 14-year-old told her mother the day the bus returned April 22 about what happened on the trip to tour out-of-state colleges, but said she was afraid to report it to school officials.
"She wasn't sure what the boy might do in response," Roundtree said. "He might have retaliated against her."
Roundtree told school officials what her daughter said she witnessed, and they said they would investigate
.

Students to get wake-up calls
High school students with tardiness problems will soon be receiving wake-up phone calls to help them get to class on time.
Officials at said the nearly 250 students who have been tardy five or more times since March will be receiving automated calls between 6:30 a.m. and 6:45 a.m. on school days to help them get out of bed and ready for school on time.
"If we can get them out of bed which is half the battle and into school then it will work," Dean of Students Lisa Wunn said.
The idea was suggested by a counselor after finding many tardy students gave the excuse of not having an alarm to help them get up in the morning. The program will begin before the end of the school year to serve as a pilot program for next fall.
.

New home for pencil sharpener 'museum'
Tourism officials have made a point of displaying the hundreds of pencil sharpeners collected by an minister who died last summer.
The Rev. Paul Johnson had kept his collection in a small shed he called his museum, outside his home in Carbon Hill in southeast . A new home for his more than 3,400 sharpeners was dedicated inside a regional welcome center.
Johnson started collecting after his wife gave him a few pencil sharpeners as a gift in the late 1980s. He kept them organized in categories, including cats, Christmas and . The oldest is 105 years old.
An Ohio Senate proclamation calls the new display "a fitting tribute" to Johnson, a World War II veteran.
.
Posted by The Man at 5/16/2011 No comments: Cheese triggers false drug-test results
Authorities in Asheville, N.C. said that an enzyme found in cheese triggered false drug test results that led North Carolina deputies to think a man with 91 pounds of tortilla dough was actually carrying that much cocaine, the sheriff said.
Antonio Hernandez spent four days in an jail this month before tests by a state lab showed he was carrying food, not drugs.
A deputy stopped Hernandez on May 1 and found what turned out to be a mix of cheese, shrimp and tortilla and tamale dough in his truck. A portable kit used by deputies changed colors, indicating the mixture was illegal drugs.
Sheriff Van Duncan said he didn't know until this case that some foods, like cheese, can give false positives on field drug tests. He plans to have deputies talk to the company that makes the tests.
.

Man lied to boss about wife’s cancer for money
If you’re going to extort money from your employer by saying your wife died from cancer, make sure she doesn’t get the card at home expressing condolences on her death.
That’s what police say happened in the case of Scott Wellington, a 31-year-old man, who is facing two counts of theft by deception for allegedly telling his employer, C&M Machine Products in , that his wife was seriously ill with cancer with the intent of getting money out of them.
After being told of his wife’s illness, the company donated $7,000 to the family.
According to police, then told his company his wife had died, prompting a sympathy card to be sent to their residence.
The jig was up when the wife received the card at their home. She called the authorities to let them know she was in fact still alive and never had cancer.
.

Police arrest man who wanted to face his fear of being naked
Boise Police say 20-year-old Jonathan Palmer was walking in the area of 15th and Hill when they caught up with him. Lt. Kent Lipple says dispatchers received several calls from people saying they'd seen him.
Lipple says Palmer was not under the influence of drugs or alcohol, but rather, Palmer wanted to conquer his own fears and help the public conquer its fears too.
"He wanted to face his fear of being naked in public," Lipple said.
According to Lipple, Palmer told arresting officers: "I want the public to understand its okay to see a naked man walk down the road."
Lipple says the man was cooperative and articulate. Palmer was arrested on a misdemeanor public nudity charge.
.

Man blames boredom for fake 911 calls
A man who claims boredom caused him to make hundreds of false 911 calls to authorities around the country will get his 15 minutes of fame.
Mason Seckar, 20, of , , will appear on the TV show "Inside Edition," where it is expected he will discuss what drove him to routinely prank call authorities, mostly the , , sheriff's department, since January.
No charges have been filed against Seckar, who still maintains the calls were funny, according to the Orlando Sentinel. The FBI is investigating him and has learned he used Skype to disguise his phone number. Search warrants have been executed of his home.
The paper reported the TV show confirming Seckar made the calls because he was "bored."
Among the false reports that led deputies astray, it was reported Seckar called 911 to say he was shot on a motorcycle, that he was in a McDonald’s bathroom with his "5-year-old girlfriend" and that he wanted to become a teacher but was afraid he would molest his hypothetical, future students.
.
Posted by The Man at 5/16/2011 No comments:

The world's facial hair elite have descended on for the 2011 World Beard and Moustache Championships.
.

.
150 contestants from 15 countries have flocked to the Prinsen Hotell in , to be in with a chance of winning the much-coveted prize for the world's best facial hair.
The World Beard and Moustache Championships take place every two years and competitor’s battle out their facial furniture in 17 different official categories ranging from Dali and Fu Manchu moustaches to Garibaldi and Imperial-style beards. The top three finishers in each category take prizes.
. 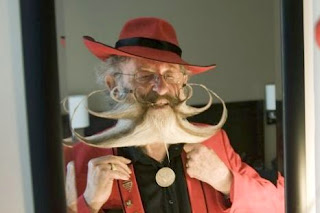 .
Ole Skibnes, the president of the host Norwegian Moustache Club, which is hosting this year's championships, says judging the different hairy entrants is no easy task.
'This is not a circus,' Mr Skibnes said. 'You can't just judge the size of the moustache - you have to see if the hair is well-groomed, see if it suits the person, see if it makes them look good.'
First held in 1990, the competition has taken place every two years since 1995.
The 2009 contest took place in where Americans, Germans and Belgians performed well.
The winners have not yet been announced.
.
Posted by The Man at 5/16/2011 No comments:

Man with a Shoe Fetish