Once again the Almighty Penis makes the news....

WTF is Wrong With People? 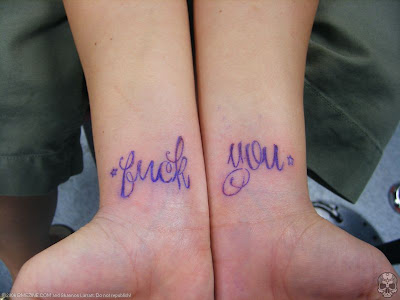 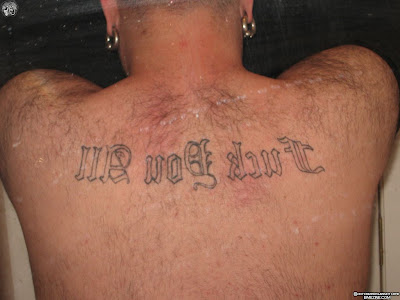 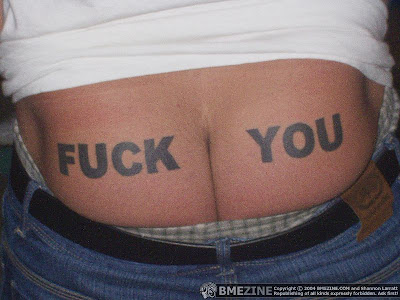 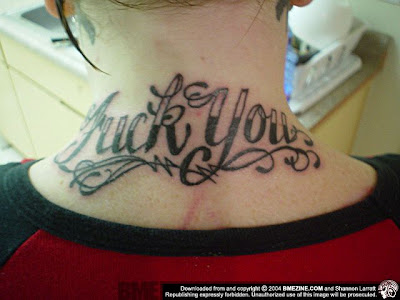 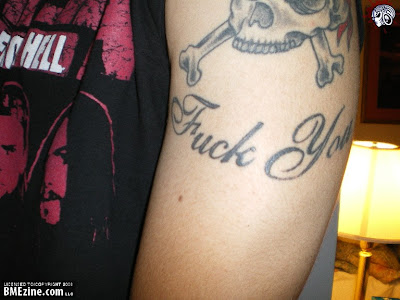 wirecutter said...
Even though I am heavily tattooed I would not even consider putting something on my body that is racist, obscene or offensive, visible or not. How would you explain something like that to your kids, grandkids or in-laws?

You're in Court, Not a Bar.

Kirstie Arnold, 28, of Lancaster, Kentucky, was sent to the Boyle county jail after wearing short shorts during a court appearance on Monday before Garrard District Judge Janet Booth.
Booth had warned Arnold about her clothes in two previous court appearances, and in the last appearance had fined Arnold $50 (£25) for her attire. A court videotape of Monday's proceeding contains the following exchange:
"Why shouldn't I put you in jail for contempt today?" Booth asked. "I told you twice."
"I'm sorry," Arnold said.
"No, you're not," Booth said. "I told you twice. I even fined you for being in contempt. Why shouldn't I throw you in jail today? You apparently don't care about the court's orders."
"I forgot," Arnold said.
"How could you forget?" Booth said. "No, seriously, how could you forget? It's a complete disregard of court order. Complete. You should go to jail today, and you're going."
"Well, next time I won't wear shorts," Arnold said.
"I bet you won't," Booth said. And with that, Booth ordered her to serve three days of temporary detention "for disregard and disrespect for court proceedings".
.
Short Shorts Get Woman Three Days Jail
Posted by The Man at 9/13/2008 No comments: 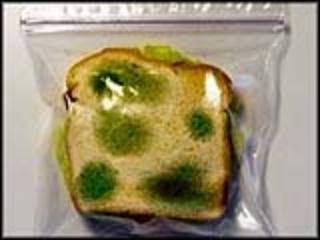 Do you have a problem with your co-workers taking your lunch from the officer refrigerator?
Now there's a new lunch bag that some say will keep the hungriest thief away from your grub.
It's a lunch bag with mold. Actually, it's a ziplock bag with a pattern that looks like mold.
Parents, this could also be a hit at the lunch table at your kids school.
The designer is New York-based Sherwood Forlee who is actually a trained mechanical and aerospace engineer.
.
.
What a shame it is that this would have to be used. I have heard of this happening where I work but I don’t put anything in the frig there as I wouldn’t be able to eat it afterwards. Maybe if this happens allot to someone I would start making lunch with lots of laxatives in it!
.
I dont eat until like 10:30pm but by that time the cleaning staff has alredy tossed my bag away!! I even put notes on it saying NIGHT SHIFT LUNCH DO NOT TOUCH! But It's still gone. I talked to my boss but he told me they are to to toss out EVERYTHING in there. I dont think this bag would work for me.
.
People will now check to see if it’s the bag or the sandwich that has mold. If it’s the new "Anti-theft" bag they will still eat your food! I like the laxative idea better... Matter of fact I know someone who actually did that and needless to say they never had their lunch messed with again!
Posted by The Man at 9/13/2008 No comments:

Parents spin their kid and then watch as he walks straight into a pole.

Labels: Not Using Their Brain, Video's

Deal or No Deal Moment

Thanks but No Thanks
Charity Turns Down Share of $3M Lottery Jackpot
A New York charity says it has turned down a share of a $3 million lottery jackpot because accepting the money could send the wrong message to gambling addicts.
The Lighthouse Mission, which helps feed 3,000 hungry Long Island residents a week, had been chosen to share an anonymous donor's jackpot last month. The donor gave the winning ticket to the True North Community Church, which said it would share the money with other charities.
The mission's pastor, James Ryan, says he appreciates the offer but had to turn it down because his organization counsels against addictions, including gambling. He did not say what the mission's share of the prize would have been.
.
Mom Posed as Daughter to Be Cheerleader
A 33-year-old woman is accused of stealing her daughter's identity to attend high school and join the cheerleading squad.
Wendy Brown is charged with felony identity theft after enrolling in a Wisconsin high school as her daughter.
The criminal complaint says Brown admitted to telling school officials she was 15 because she wanted to get her high school diploma and join the cheerleading squad.
She allegedly attended practices, received a cheerleader's locker and went to a pool party at the coach's house.
The complaint says Brown has a history of identity theft. Her daughter lives in Nevada with Brown's mother.
.
Parkinson's medication caused child porn habit, judge rules
A former headmaster who had thousands of indecent images of children on his computer walked free from court after a judge ruled the drug he had taken to treat his Parkinson's disease was responsible for his crime.
Philip Carmichael said the drugs he was taking caused him to become hyper-sexually active.
The 58-year-old from Wantage, who had 8,000 images and videos on his computer, including one of a nine-year-old girl before he started taking the drugs, was given an absolute discharge despite pleading guilty to the offences.
Judge Mary-Jane Mowat said his case was "wholly exceptional" because it was clear the pills he was taking had caused his hypersexuality.
.
You mean I have to actually pay for it.
£5,700 bill for phone sex bill
A hotel guest who spent 27 HOURS calling a premium sex hotline couldn't pay his incredible £5,700 bill when he checked out.
Police in Germany have said that the culprit known as Anthony M, 22, is the same man wanted in Hannover since February, when he checked into a local hotel and "forgot" to pay the bill upon leaving.
The Hannover hotel is still owed hundreds of euros, reported German newspaper Bild.
But Anthony, from Leverkusen, explained: "I was sitting in my hotel at night and suddenly became horny, so I called a sex hotline.
.
Woman jailed for writing bad check for car
A Goldsboro, N.C. woman was arrested Wednesday for allegedly writing a bad check to a dealership in April for a new car
Terri Harrison Robbins, 48, wrote a check of $24,072.47 to Toyota of Goldsboro for a 2008 Toyota Camry in early April, Goldsboro police said. The check was returned because the bank account on which it was drawn was closed.
On April 9, police issued an arrest warrant for Robbins, charging her with obtaining property by false pretenses. Investigator Nelson Viera recovered the Camry and returned it to the dealership
Posted by The Man at 9/13/2008 No comments: