Sickles Highschool Flasher Not So Innocent
Mother of Yearbook Flasher Caught Hosting Underage Drinking & Dope Parties
In connection with my previous post Now there's a memory... about the female student who didn’t wear panties for her highschool yearbook photo in which her genitals were published.
NEW PHOTOS come to light showing the panty-less daughter's mother smoking dope and drinking with underage kids at a party she apparently hosted. 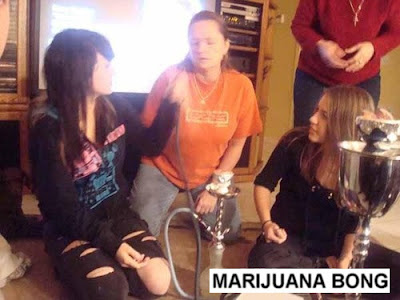 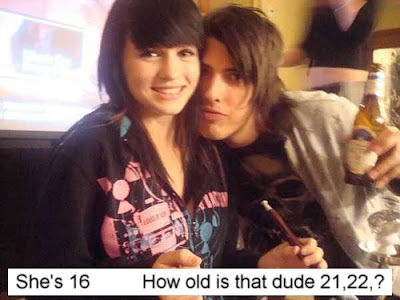 Streaker at Mets Game Facing a Year in Jail
A man who jumped naked onto the field of the Mets-Braves on Tuesday night, and now says he did so on a bet with his boss, faces up to a year in jail and civil penalties of up to $5,000, the Queens district attorney announced Wednesday.
The man, Craig Coakley, 38, of Whitestone, Queens, was arraigned on Wednesday afternoon in Queens Criminal Court on charges of third-degree criminal trespass and interference with a professional sporting event. A court date was set for June 11. An order of protection was issued, barring him from Citi Field.
Mr. Coakley was in a field-level seat around 8 p.m. Thursday when he suddenly removed his clothes, placing a stuffed monkey around his waist and jumped onto the field during the fifth inning. He was promptly escorted off the field.
After his arrest, he reportedly told the police that he "didn’t think I was gonna get in so much trouble."
PICTURES and More
.
Man tried to hire prostitute for his son
A man who tried to hire a prostitute to take his 14-year-old son's virginity as a present was spared jail by a court on Friday.
The Polish national took the boy out in his car and allowed him to pick out the prostitute, who was standing at the side of the road in the red-light district of Nottingham.
But the 42-year-old father was arrested because the teenager had chosen an undercover police officer, Nottingham Crown Court heard.
The man, who cannot be named for legal reasons, was handed a 10-month prison sentence, suspended for a year, after he admitted a charge of trying to solicit a woman to have sex with a child.
.
Teen Tries to Rob Internet Café With Banana
Authorities say a Winston-Salem North Carolina teen who was thwarted as he tried to rob a store with a banana ate it before they could arrive.
Winston-Salem authorities say 17-year-old John Szwalla held the banana under his shirt when he entered the store Thursday, saying he had a gun and demanded money.
Owner Bobby Ray Mabe says he and a customer jumped Szwalla, holding him until deputies arrived. While they waited, Mabe says the teen ate the banana.
Mabe says deputies took pictures of the banana peel.
Forsyth County Sheriff's office spokesman Maj. Brad Stanley says deputies joked about charging Szwalla with destroying evidence.
.
Gang fools Mexico prison guards
An armed gang disguised as police has broken into a jail in northern Mexico and freed more than 50 prisoners.
A convoy of at least 15 vehicles arrived at the prison with gang members all apparently disguised as federal police officers.
Once inside, the prison authorities were persuaded that an inspection was under way and guards were overpowered.
.
Pull over sir, your 195mph Ferrari's going too slowly
Denis Evans was stopped in his 195mph Ferrari by a top cop — and told off for going too slowly.
The businessman, 58, was driving his £164,000 car at 25mph in a 40mph village zone when off-duty Assistant Chief Constable Nick Croft saw him.
After a roadside check on the car’s ownership and the ticking off Denis, of Southerndown, South Wales, was allowed to go.
He said: "I was flabbergasted when he said I wasn’t going fast enough. The road is badly lit, with a nasty bend, and often has sheep on it. I felt 25 was safe."
Locals in Ogmore-by-Sea want the 40mph limit lowered.
A police spokeswoman defended Mr Croft, who lives nearby.
She said: "The Assistant Chief Constable was following the Ferrari, which was going very slowly, and he thought, ‘What if it was stolen?’"
.
Posted by The Man at 5/17/2009 1 comment: