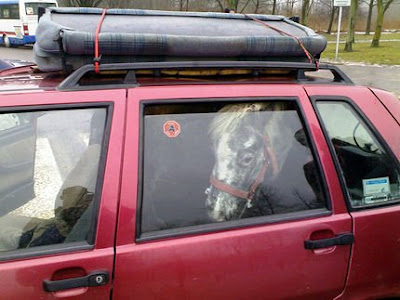 It may only be one horsepower, but this Fiat Uno certainly gave traffic cops a run for their money as it sped along the motorway with a foal in the back seat. The driver had bought the 260 lbs foal at a livestock market near the Polish capital Warsaw and was driving 150 miles to his farm in the north of the country. By the time police caught up with it driver Hieronim Kapuscinski had pulled over when the car's engine conked out. Inside the car the pony stood waiting patiently to be fed while the driver's two pals - who'd been crammed into the front - checked that the rear seat was secure on the roof rack. Police fined the driver 50 GBP for inappropriate use of a car and confiscated the horse until its owner can arrange for a proper livestock transporter to pick it up.
.
.
Cow rides in back of car in Beirut.

During a recent trip to Winnipeg (Manitoba, Canada) this last weekend.
I saw this sign and thought it was funny and took a picture
You're more than welcome to post it on the page if you wish.
Giant Tiger is a 'family' discount mega store. Kinda like a dollar store on steroids.
I was wondering if the coupon deal, is only redeemable in pairs...
cheers
c
ps. your site...a daily read, thanks for your work. 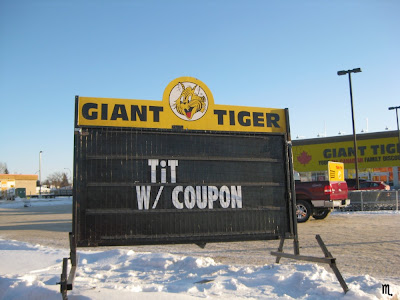 Thanks Chris
.
nonamedufus said...
We like to keep abreast of things north of the 49th!
I enjoy your blog - daily reading - and I nick things once and awhile while citing its source.
I've linked to your blog so that more can enjoy your material.
.
Correction nonamedufus you should have said north of the 48th.
Alaska and Hawaii makes 49th and the 50th states.
It's a simple mistake for you Foreigners. HaHaHa
.
nonamedufus said...
49th parallel...you must be using our metric system!
.
Duh!
Sorry about this, I haven't heard that for a while.
.
My coupon says "Assorted styles and colors. Mix and Match.
Buy one get another free of equal or lesser value."
.
That’s better than the ones that say "Sorry, only one per customer."
.
Posted by The Man at 1/27/2009 No comments: 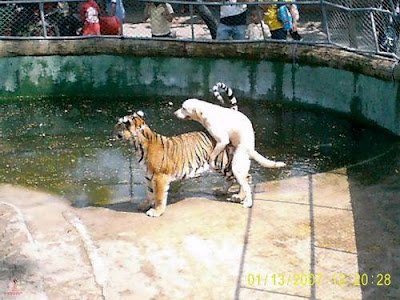 Thanks Amy
.Scheme Factory said...
"Courage" the dog lived up to his name.
The kids were sad to see him go, but knew he died doing what he loved.
.
UpDate 1-30
Tiger having SEX with a Dog
Tiger (cub) and Dog (pup) were best of friends when they were young
.
.
Posted by The Man at 1/27/2009 No comments: 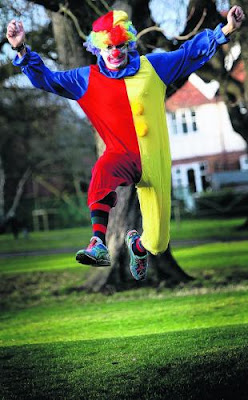 Schoolteacher running for world record marathon dressed in a clown costume.
A school teacher from Radley is believed to have broken a world record after running a marathon dressed as a clown.
Paul Fernandez, 34, completed the Glouc-ester Marathon last Sunday in full clown costume in 2hr 50min 34sec — more than half-an-hour faster than the Guinness World Record of 3hr 24min.
Mr Fernandez, a biology teacher at Radley College, was second overall in the race out of about 250 runners.
His time has to be verified by Guinness Book of Records officials.
Before the race, the 34-year-old teacher said: "My personal best is 2hr 39min, which I did at Abingdon last year.
"Gloucester is a small marathon and the winner only did it in 2hr 53min last year, so in theory I could be near the front, which could be a bit embarrassing.
"I’m hoping to go 30 seconds a mile slower than my personal best and still come in at under 2hr 50min."
He was struck with the idea after looking at feats of endurance.
.
Posted by The Man at 1/27/2009 No comments: 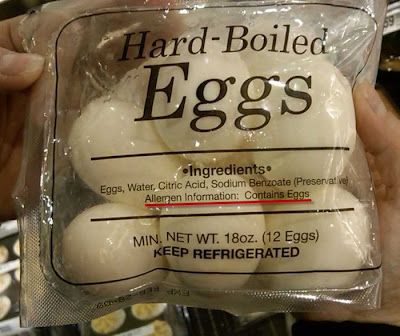 Raccoon bit off man's manhood
A feisty raccoon has bitten off a man’s penis as he was trying to rape the animal.
Alexander Kirilov, 44, was on a drunken weekend with pals when he leapt on the terrified – but toothy – fur ball.
"When I saw the raccoon I thought I’d have some fun," he told stunned casualty surgeons in Moscow.
Now Russian plastic surgeons are trying to restore his mangled manhood.
"He’s been told they can get things working again but they can’t sew back on what the raccoon bit off," said a pal of his.
"That’s gone forever so there isn’t going to be much for them to work with."
.
OUCH!
People do the dumbest things wnen drinking.
Now he will never know what he made missed out on.
.
Laundry thief is just a cat burglar
He stalks the night preying on undies left unsuspectingly on clothes lines and in laundry baskets.
Lithe and agile, he leaps fences to get his wily paws on socks, swimmers, shirts, dresses - even dolls.
But it is no pervert at the center of Mosman's missing panties mystery.
After months of curiosity and clothes disappearing from across the suburb, the cat burglar has been revealed as, well, a cat.
His name is Cisco, a six-year-old Tonkinese cat owned by Dalton Rd resident Peter Hand.
"It just started a few months ago, Cisco kept bringing in all manner of items," Mr Hand said.
"People were wondering where their things were getting to."
Besides undies, there have been cleaning mitts, garden gloves, a pin cushion and children's toys.
The blue-eyed cat drags the booty down a side path, through the cat door and up to Mr Hand's bedroom. But now the secret is out.
"I've been trying to find the owners. One lady asked if I had her swimmers," real estate buyers agent Mr Hand said. "She was delighted to get them back."
.
Driver on a Drip
A speeding driver stopped by police was wearing hospital robes and had an IV drip in his arm.
Guang Wang was attached to a bag of antibiotics dangling from the car’s rear view mirror.
He told shocked cops he had fled hospital after getting fed up waiting to complete his treatment.
So he jumped out of bed on a ward and sneaked out to the car park to drive home in Wuxi, eastern China.
Police fined him £20 for speeding and drove him back to the hospital to complete his treatment.
.
Octuplets? No, that's a litter!
8 Babies Born to Stunned California Parents
Doctors in Bellflower California methodically delivered a mother's seven babies, five boys and two girls, just as they had repeatedly rehearsed.
Then came the eighth.
The surprising sixth boy and eighth child made Monday's mass birth not just remarkable but historic.
"It is quite easy to miss a baby when you're anticipating seven," said Dr. Harold Henry, chief of maternal and fetal medicine and one of 46 doctors, nurses and assistants who delivered the children by Caesarean section at Kaiser Permanente Bellflower Medical Center. "Ultrasound doesn't show you everything."
Just five minutes after the first birth, the unexpected eighth baby came out at 10:48 a.m.
"My eyes were wide," Dr. Karen Maples said.
It was just the second live octuplets birth in U.S. history.
.
Posted by The Man at 1/27/2009 No comments: 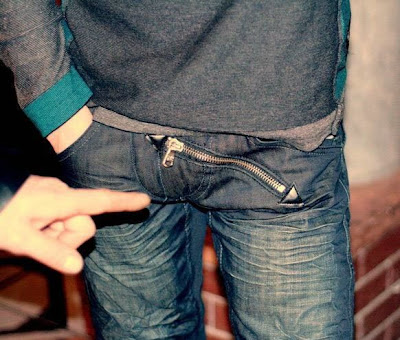 Boss, have we got insurance on the car?

Cursing seems to be a part of almost everyones vocabulary

Clearly the choice of the new generation - NSFW 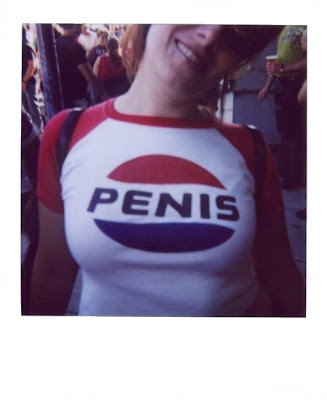