A judge's effort to stop a 67-year-old homeless man's streak of arrests came too late.
Grady , who has been arrested at least 120 times since 1998, was charged with sexual battery and held in lieu of $101,000 bail.
stood before Palm Beach County Circuit Judge Krista Marx on a trespassing charge. In an effort to halt the constant arrests, she ordered him to be held for 24 hours to undergo a mental evaluation.
. 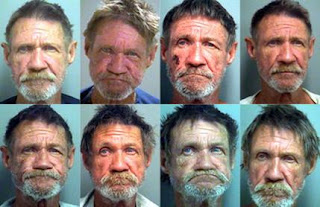 .
Within hours, though, the Delray Beach Police Department came forth with new charges against , this time for sexual battery.
According to the arrest report, police were called to , where a 42-year-old woman said she had been drinking with in a parking lot when she passed out drunk.
The woman said she was later awakened by a mutual friend, who said he saw sexually assaulting her, the report stated. When was questioned by the police, he responded, "I probably did that," according to the report.
The charge is one of the most serious lodged against since his first arrest in April 1998, according to Palm Beach County Jail records. Previous charges include trespassing, indecent exposure, simple battery and consuming alcohol in public.
.
Posted by The Man at 4/24/2011 No comments:

A man was charged with inhaling toxic vapors after his wife called police and told them he was huffing paint in their apartment.
According to a Fort Wayne Police Department report, when an officer arrived at the apartment, Elizabeth Gibson said she and her husband Kelly had been in an argument and he had gone upstairs to huff paint.
The report said since she was afraid to go inside, she handed the officer her keys and followed him up.
. 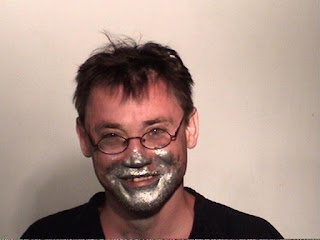 When the officer opened the door, the entire apartment smelled of paint fumes and Kelly was found sitting on the couch with his shirt off, and his hands, mouth, nose and chin covered in silver paint.
Police said Kelly had a can of silver spray paint in his right hand and a paint-covered plastic bag in his left.
The officer said Kelly had a dazed, glassy-eyed look about him and was unsteady on his feet.
Kelly was taken to the Allen County Jail and charged with inhaling toxic vapors.
This incident was the 48th time Kelly was charged with inhaling since 1992.
.
Posted by The Man at 4/24/2011 No comments: