Do you know what the “Beyond” is with Bed, Bath and Beyond?
Woman sees man masturbates in Bed, Bath and Beyond parking lot
A man was observed masturbating in the driver’s side seat of his vehicle in the parking lot of Bed, Bath and Beyond on East Commons Drive.
The woman told deputies that she was exiting Bed, Bath and Beyond when she saw a sedan next to her car with its engine running, but was unable to see anyone inside, according to an Okaloosa County Sheriff’s report.
As she walked between the two cars she saw a man masturbating in the front seat, and according to the report, “she did see the unknown subject’s sexual organs and she was offended by what she saw.”
Deputies found the 21-year-old man by running the license plate number provided by the woman. He admitted to deputies that he was the person masturbating in the Bed, Bath and Beyond parking lot and admitted that this was the second time he was caught.
.
76-year-old killer
A Euclid woman is sentenced after entering a no contest plea in Euclid Municipal Court on Thursday. Dorothy Richardson, 76, must pay a $500 fine and perform 80 hours of community service after using a shovel to kill a baby deer in her backyard.
"Your honor, I'm very sorry," said Richardson. She wept in court after accepting a plea deal following the June 15th incident on Waynoka Road. "I looked up and there he stand with glazin' eyes and whining at me, I was afraid that he was gonna jump on me."
In exchange for her plea, Richardson's charges were reduced to a single misdemeanor count. She admitted to hitting the animal and prosecutors say she showed it to a neighbor, bragged about it and left it on the curb with her trash.
VIDEO
.
Man shoots cocaine from the cheeks of his butt
A 30-year-old man was arrested Thursday on a host of charges after a bag of cocaine “shot out” of his backside in a gas station, according to an affidavit released Friday.
Investigators said they got a tip that cocaine was being transported in a brown Cadillac in the area of Interstate 95 and Midway Road, and investigators found the vehicle Thursday morning at a gas station at Midway and Glades Cut-Off roads.
The affidavit gave this account:
A man was pumping gas into the vehicle, and a drug sniffing dog smelled narcotics in the vehicle and the area where the man, identified as Warren Leonard Wiley, stood. A search of Wiley turned up a crumpled dollar bill with cocaine in it.
“Wiley was then escorted to the men’s room for a more detailed search,” the affidavit states. “While being escorted, Wiley dropped his shorts in the middle of the store stating, ‘I don’t have nothing.’ ”
Wiley’s backside appeared “clenched tight” as if he was hiding something. While walking, his backside relaxed and a clear bag with about 22 grams of cocaine in it “shot out” onto the store’s floor.
.
Posted by The Man at 10/03/2009 1 comment:

Why women have sex

According to a book, there are 237 reasons why women have sex.
And most of them have little to do with romance or pleasure.

“10 Good Reasons Why Women Have Sex”

It seems like everyone right now is talking about that new book Why Women Have Sex by Cindy Meston and David Buss. Apparently lots of women reported having sex to keep the peace, to stave off boredom, to relieve a headache, or to get their husbands to take out the trash (oh, yeah, and occasionally because they’re in the mood, too). And everyone’s acting like it’s this huge deal that 100% of the women didn’t say that, 100% of the time, they have sex because they’re so turned on they can’t think straight. Sure, sometimes women have sex for fairly unsexy reasons…and sometimes they have sex for more, shall we say, honorable ones — which includes, but isn’t limited to, being so turned on they can’t think straight.
.
Here are 10 and please, add your own reasons in the comments section!
1. Because you’re horny. (Duh.)
2. Because even if you’re not in the mood, 99.9% of the time you get in the mood once you start.
3. Because it’s (almost) impossible to argue while having sex.
4. Because you just received the most amazing 30-minute back-rub and your partner didn’t even try to segue the massage into sex.
5. Because your partner is hot stuff.
6. Because you still remember thinking there’s no way this person would ever look twice at you…and then they did.
7. Because orgasms are an excellent stress reliever.
8. Because you’ve got a partner who makes sure you always orgasm first, who doesn’t expect it to happen from intercourse, and who doesn’t immediately roll over after he’s spent.
9. Because your neighbors are really annoying and you want to do it loudly to remind them that you have a better sex life than they do.
10. Because sex with someone you love is (to paraphrase one-time Quaker Oats spokesman Wilford Brimley) the right thing to do and a tasty way to do it.
.
Posted by The Man at 10/03/2009 1 comment: 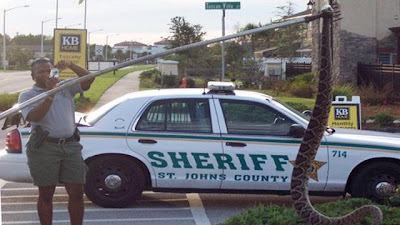 Gas Mask Bra one of the most INSANE patents 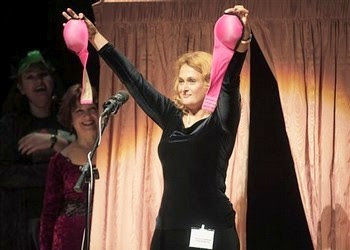 Elena Bodnar, winner of the Ig Nobel Public Health Prize, displays a bra she designed that converts into a pair of gas masks, during the Ig Nobel prize awards ceremony on Harvard University's campus in Cambridge, Mass. , Thursday, Oct. 1, 2009. Bodnar said that the bra/gas masks could have been useful during the Sept. 11 terrorist attacks. One mask is for the wearer and the other for a friend. 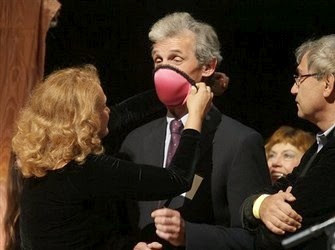 Elena Bodnar, left, winner of the Ig Nobel Public Health Prize straps a portion of a bra she designed that converts into a pair of gas masks to the face of Wolfgang Ketterle, 2001 winner of the Nobel Prize in Physics, at the Ig Nobel prize awards ceremony on the campus of Harvard University, in Cambridge, Mass. , Thursday, Oct. 1, 2009. Bodnar, said that the bra/gas masks could have been useful during the Sept. 11 terrorist attacks.
.
Posted by The Man at 10/03/2009 No comments: