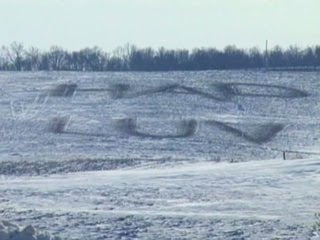 ZWINGLE, Iowa - Ask this Iowa wife if she got the perfect birthday present and she'll tell you her hubby "dung good."
Carole and Dick Kleis live together on their eastern Iowa farm. This year for her birthday, Dick used more than 120,000 pounds of manure to spell out a special message. It basically says 'Happy Birthday, Love You,' but in shorthand.
And it only took three hours to spell it all out in a stinky, but mushy way.
"It's not hard," said Kleis. "Any manure will work but the good, soft, gushy, warm stuff works the best. It kind of melts the snow."
Carole say Dick's birthday is in May and she's already thinking of ways to beat out his gift.
.
Posted by The Man at 1/07/2010 1 comment:

Man's penis removed from pipe
A man who went to casualty with his penis stuck in a steel pipe had to be cut free by firefighters using a metal grinder
Medics at Southampton General Hospital could not get the man's penis out of the stainless steel pipe because the restricted blood flow had caused it to become aroused.
So they called in Hampshire Fire and Rescue Service
They turned up with a special equipment unit from St Mary's station in Southampton and seven firefighters to help in what a spokesman said was a ''delicate operation''.
The firefighters used the four-and-a-half-inch grinder to cut the pipe from around the man's penis and it took about 30 minutes.
The patient was given an anesthetic and his penis was left bruised and swollen but otherwise unharmed.
The anxious man aged about 40 gave hospital staff no explanation about how the pipe got stuck after he turned up on Tuesday morning.
A Hampshire Fire and Rescue Service spokesman said: ''Initially the crew did not have the appropriate cutting equipment to free the man.
''It was a very delicate operation that required a very steady hand and the crew was worried about things getting too hot during the cutting.
.
Funeral home sent “grandmother's brain to family”
Members of a New Mexico family are suing a funeral home, claiming their grandmother's brain was sent home in a bag of personal effects given to them after her death.
The lawsuit filed on behalf of four family members in state District Court in Albuquerque says the discovery was made the day after interment, when relatives smelled a foul odor coming from a bag they received from DeVargas Funeral Home and Crematory of the Espanola Valley.
The Albuquerque Journal reported on the lawsuit in a story published on Wednesday
Johnny DeVargas, the owner of the funeral home, said the fault did not lie with his business, and that another entity in Utah - where the woman died in a September car crash - was responsible.
.
Beef Processing Method Is Questioned
Eight years ago, federal officials were struggling to remove potentially deadly E. coli from hamburgers when an entrepreneurial company from South Dakota came up with a novel idea: injecting beef with ammonia.
The company, Beef Products Inc., had been looking to expand into the hamburger business with a product made from beef that included fatty trimmings the industry once relegated to pet food and cooking oil. The trimmings were particularly susceptible to contamination, but a study commissioned by the company showed that the ammonia process would kill E. coli as well as salmonella.
With the U.S.D.A.’s stamp of approval, the company’s processed beef has become a mainstay in America’s hamburgers. McDonald’s, Burger King and other fast-food giants use it as a component in ground beef, as do grocery chains. The federal school lunch program used an estimated 5.5 million pounds of the processed beef last year alone.
.
Posted by The Man at 1/07/2010 No comments: 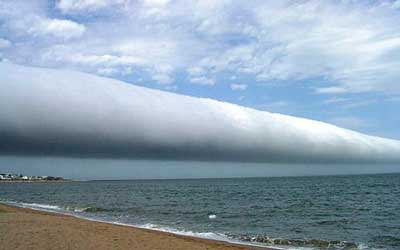 This amazing picture shows a rare phenomenon called a roll cloud which tend to form ahead of a cold front and can stretch for miles.
Most common when an advancing storm front causes moist air to rise, then cool to the point where it becomes a cloud known as the dew point.
When this happens along a front, a roll cloud can form, often with air actually circulating along the horizontal axis of the cloud.
It was also NASA's picture of the day a couple of days ago.
.
Posted by The Man at 1/07/2010 No comments: