"Made from different size douglas fir blocks and
3,726 drywall screws." 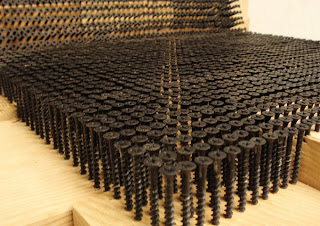 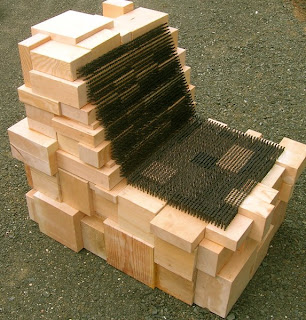 When Boys and Girls wanna have fun

Moldy Mattress Nets Inmate $295k
Lousy bedding violated Wisconsin felon's constitutional rights
A Wisconsin man serving time for reckless homicide yesterday was awarded $295,000 by a federal jury that found the inmate's constitutional rights were violated when he was forced to spend two months sleeping on a moldy, waterlogged mattress. Reggie Townsend, 29, scored the six-figure windfall after a U.S. District Court panel decided that he was improperly treated while locked up in late-2004 at the New Lisbon Correctional Institution.
.
Florida's Cruel Kitten Killers
Father and son used sledgehammer on neighbor's pet
Michael Tracy Long and his son Michael Jr.. The Florida men are each facing an animal cruelty charge for allegedly killing a neighbor's kitten with a sledgehammer. According to Crestview police, the Longs killed the animal last month and placed the body in a yellow plastic bag before depositing it in a neighboring yard. YOU’RE GOING TO HELL, MURDERERS!
Picture and More
.
Giant Diamond Unearthed in Africa May Set Record
A huge gemstone that could become the world’s largest polished round diamond has been found at the Letseng Mine, owned by Gem Diamonds, in Lesotho, southern Africa.
The diamond weighs 478 carats and is the twentieth largest ever found. Gem Diamonds says that initial examination suggests that it has a flawless center and could produce a 150-carat round-cut white diamond worth tens of millions of pounds.
"Preliminary examination of this remarkable diamond indicates that it will yield a record-breaking polished stone of the very best color and clarity," the company's Chief Executive Clifford Elphick said in a statement.
The stone would dwarf the 105-carat Kohinoor in the Crown Jewels. The largest rough diamond found was the Cullinan, in 1905, which weighed 3,106 carats uncut.
Picture and More
.
Towing the line
Tow trucks parade through NYC in world record bid
Nearly 300 tow trucks rumbled through New York City on Saturday in an attempt to smash the world record for the largest parade of its kind.
Organizers think they hit the mark, with 292 trucks participating. The procession included flatbeds, wreckers and 50-ton rotators.
The trucks departed from Shea Stadium in Queens and cruised down a couple of highways before finishing at an abandoned airport tarmac to spell out "New York."
The previous world record was a parade of 83 tow trucks in August 2004 in Washington state.
Picture and More
.
The House That "Rained Cockroaches"
This one involves a couple’s home that was so filthy, cockroaches rained down on investigators from the ceiling! Upon their arrival, police rescued a roach-covered toddler and stopped her from playing with butane aerosol gas container moments before the child put the nozzle in her mouth. Literally thousands of roaches permeated the home—crawling on walls, hallways, storage areas, cupboards, drawers and closets. Roaches were found crawling on a 2-year-old toddler in the house, who had been sleeping in a roach infested crib. Rancid, spoiled food littered the kitchen area along with overflowing trash cans. Walkways and counter tops were layered with dirty clothes, mold encrusted cooking utensils, discarded food boxes and insects. The bathroom was so unsanitary that a black layer of filth coated the porcelain while clothing, toys, discarded materials and stinking towels littered the floor. When an officer opened the refrigerator door, he allegedly jumped away because of the overwhelming number of "roaches that rained down on him."
Pictures and More
.
c said...
"Upon their arrival, police rescued a roach-covered toddler and stopped her from playing with butane aerosol gas container moments before the child put the nozzle in her mouth."
Obviously the toddlers exit plan!
Posted by The Man at 9/22/2008 No comments: