A 25-year-old Egyptian man cut off his own penis to spite his family after he was refused permission to marry a girl from a lower class family, police reported Sunday.
After unsuccessfully petitioning his father for two years to marry the girl, the man heated up a knife and sliced off his reproductive organ, said a police official.
The young man came from a prominent family in the southern Egyptian province of Qena, one of Egypt's poorest and most conservative areas that is also home to the famed ancient Egyptian ruins of Luxor.
The man was rushed to the hospital but doctors were unable to reattach the severed member, the official added citing the police report filed after the incident.
The official, who spoke on condition of anonymity because he was not authorized to speak with the press, added that the man was still recovering in the hospital.
Traditionally, marriages in these conservative part of southern Egypt are between similar social classes and often within the same extended families -- and are rarely for love.
.
Posted by The Man at 6/01/2009 No comments:

Not everyone should operate construction equipment

How not to use an Excavator 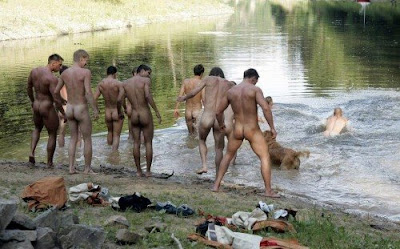 How many people do you think can simultaneously skinny-dip across North America? Guinness World Records organization has agreed to create a new category for the largest number of people simultaneously skinny-dipping, and AANR is the contact association for this record event. AANR plans to coordinate skinny-dipping events at participating clubs and legally-sanctioned nude beaches throughout North America on Saturday July 11, 2009 at 3:00 p.m. Eastern Nudist Time, to coincide with Nude Recreation Week.
.
Posted by The Man at 6/01/2009 5 comments: