You have to agree that this condom commercial is hilarious
Posted by The Man at 9/03/2008 1 comment:

Here is a riddle for the true intellectual.
Try to come up with the answer on your own.
.
The answer is at the end for those who are unable to think this one through.
.
At the exact same time, there are two 35 year old men on opposite sides of the earth.
.
One is walking a tight rope between two skyscrapers.
.
The other is getting 'oral pleasure' from an 85 year old toothless woman.
.
They are both thinking the exact same thing.
.
What are they both thinking?
.
.
.
.
.
. 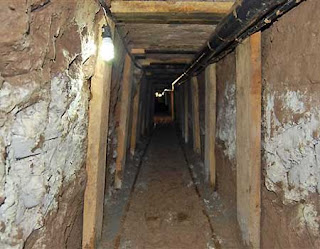 Police investigating suspicious activity at a home just south of the U.S.-Mexican border found a group of men digging a secret tunnel to the United States — complete with lights, an elevator and air-conditioning.
Acting on a reports of armed men outside, cops raided the house in the border city of Mexicali and found eight workers 20 feet underground digging a tunnel with picks and shovels, according to Baja California state police spokesman Agustin Perez.
The narrow passage — only about 3 feet wide and 3 feet high — stretched some 100 yards toward Calexico, Calif. But the tunnel still had another 100 yards or so to go until it reached the U.S, Perez said.
The sophisticated tunnel is one of 70 discovered since 2000.
Posted by The Man at 9/03/2008 No comments:

Safety and stability make biking more fun!
Check out the latest technology in keeping a bicycle stable while riding at slow speeds.
.
The GyroBike Web Site
Posted by The Man at 9/03/2008 No comments:

You Going To Do It My Way? 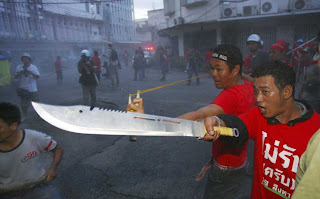 The original artwork for The Rolling Stones' iconic lips and tongue symbol has been bought by London's Victoria and Albert Museum. The logo, originally designed in 1970 and used by the rock band ever since, sold in the US for $92,500 (£51,375). 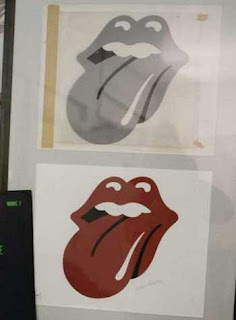 Labels: Entertainment, In The News

Have a Orgasm to cure a Knee Pain
A Reflexologist took advantage of several ill women to fulfil his perverted lust, a court heard today.
Stuart Hill, 57, told female patients he was using the latest Chinese massage technique to make them better.
The ''hormone therapy'', which he said was banned in the UK, involved placing a vibrating massager on an intimate part of the patient's body.
Hill claimed this would make the victims aroused and ''orgasmic'' and it would make them feel better, Durham Crown Court heard.
.
Suspect Trapped In Portable Toilet
It turns out a construction site portable toilet wasn't the best place to hide from two men who caught you breaking into their truck.
Those portable toilets can be so easy to tip over when you're inside with highly messy results.
That's what the Tampa Police Department said happened to Lorenzo Earl Knight, 22, on Saturday afternoon near International Mall.
Police said Knight broke into a truck in the mall parking lot, taking a $500 digital camera and the owner's manual. He had just jimmied the door of a second when its owner spotted him, the police report said.
Knight took off, leaving behind a shoe and the screwdriver he used to break into the trucks, police said.
The owner of the second truck and a friend chased Knight who tried hiding in a portable toilet at a construction site, police said. The owner and friend found Knight and tipped over the toilet to keep him there until police arrived.
Knight was covered with its contents, so much for that police car.
PICTURE and More
.
Girl’s Boyfriend Arrested After Her Mom Is Found Stuffed in Suitcase
An 18-year-old man has been booked on a murder charge after the body of his girlfriend's mother was found inside a suitcase in some woods in northeast Harris County, authorities said.
The body of 55-year-old Maria Rodriguez was found Sunday morning, the Harris County Sheriff's Office said.
The Houston Chronicle reported a man driving along a secluded private road discovered the body in a black suitcase in the woods.
Investigators later discovered Rodriguez had been reported missing by her husband Friday.
Gerson Funes-Reina was being held in the county jail Tuesday morning. No information was immediately available on whether he had an attorney.
Authorities said the victim's daughter said she helped her boyfriend put the body in a suitcase and then dispose of it.
Posted by The Man at 9/03/2008 No comments: