Who put that fence there

Funny Motorcycle Commercial
Posted by The Man at 10/21/2008 No comments:

Welcome to the Mile High Club 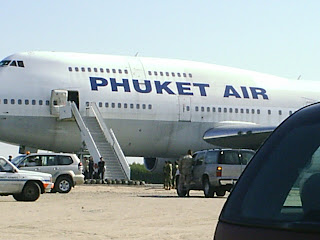 Don’t Piss Off This Woman

.
Being A Reporter Isn’t Easy…
I hope she is going to beat the crap out of him
The cameraman probably had to pull her off him
Posted by The Man at 10/21/2008 No comments:

Woman Chooses Jail Over $7.45 Bill
A woman decided to go to jail rather than pay her bill at a Fort Pierce Waffle House restaurant. The total she went to jail over: $7.45.
According to a police report, Maryanne O'Neill, 66, ordered coffee and a sandwich at a Waffle House restaurant but refused to pay the bill.
The report said an officer asked her to pay or go to jail and she refused.
A jail official said she was released Monday from the St. Lucie County Jail. She was charged with obtaining food or lodging with intent to defraud, a second degree misdemeanor.
If convicted of a second degree misdemeanor she could face up to 60 days in jail and a fine of $500.
.
Man charged with toilet paper assault
A New York man was charged with assault after allegedly hitting his girlfriend in the eye with a roll of toilet paper, prosecutors say.
Richard Bigonzi, 38, allegedly attacked Marit Ekeland, 62, with the toilet paper Sunday in the apartment they share, the New York Post reported Monday.
"She was drunk," Bigonzi told police. "I threw her wine out the window. I'm not saying whether I threw the toilet paper."
Ekeland said Bigonzi is after her money.
"I'm where he gets his money," she said. "I don't have any children. He wants to inherit all my wealth."
.
Candy truck tips over, spills onto road
Washington state officials said a truck rolled onto its side on a highway on-ramp Monday in Tacoma, crushing a car and spilling chocolate onto the road.
Washington Department of Transportation officials said the truck tipped over while in the left lane of the northbound Interstate 5 on ramp, crushing a car in the right lane and spilling Ghirardelli chocolate all over the ramp.
Officials said the driver's side of the car was crushed, but the motorist escaped with only minor injuries after moving to the passenger side of the car during the incident.
The department officials said the truck needs to be offloaded before workers can tip it back onto its wheels and tow it from the scene.
.
Former care workers masturbation claim
A group of former Nelson support workers has sparked official complaints and investigations after alleging they were ordered to help intellectually impaired people in their care to masturbate.
.
Posted by The Man at 10/21/2008 No comments: