Bike of the future 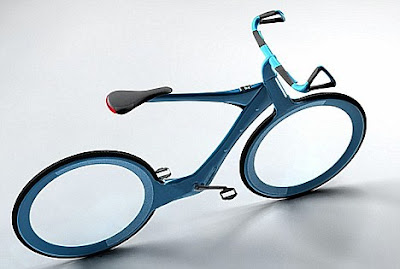 It will count calories as you pedal, play music and use a solar-powered motor when you get tired - welcome to the commuter bike of the future.
Olympic cyclist Chris Boardman was today unveiling a design that he believes will be an everyday product within 20 years. The 40-year-old said the technology was already available, it just needed the will to put it all together.
The new bike includes an inbuilt computer system incorporating an 'unbreakable' locking device that allows only the owner to open it via fingerprint recognition
A mini computer on the handlebars counts the calories the cyclist is burning by monitoring each turn of the pedals.
Spoke-less wheels make the bike more aerodynamic while the tires will be puncture-proof with self-inflating tires.
Owners of the bike, which is still being designed, won't even always have to pedal - a battery-assisted motor run by solar panels takes over if they get tired.
Plus the frame is made of carbon fiber, making the bike strong and lightweight.
Boardman, who led a research team for British Cycling in the run-up to the Beijing Olympics, said the bike would not be 'financially feasible' for 20 years.
However, the 1992 Olympic gold medalist for the four-kilometer pursuit added: 'It could be built now if there was a will. All the technologies are already there, it's just that nobody's put them all together before.'
Tom Bogdanowicz, campaign manager at London Cycling Campaign, said: 'Some of the ideas behind this bike are clearly things cyclists want. But it really needs to be affordable.'
.
Posted by The Man at 8/12/2009 1 comment: 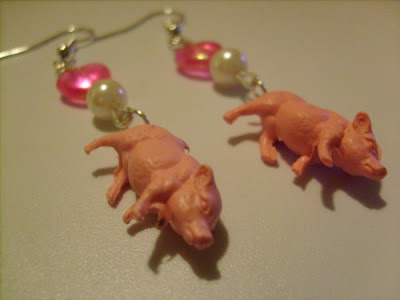 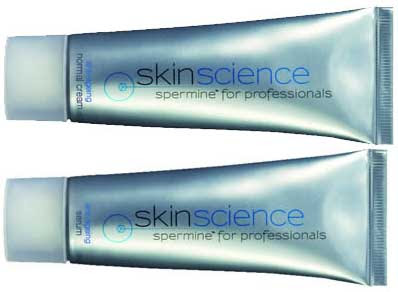 Journalist Marty Beckerman has a beauty treatment at a fancy
NYC spa: "Spermine" all over his face.
.
Posted by The Man at 8/12/2009 No comments: 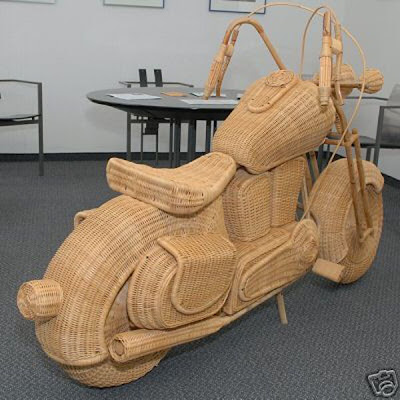 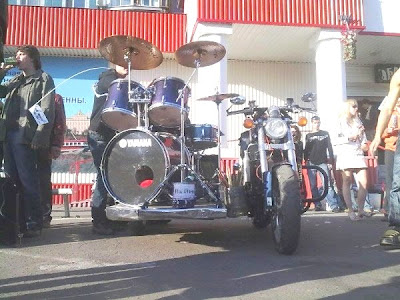 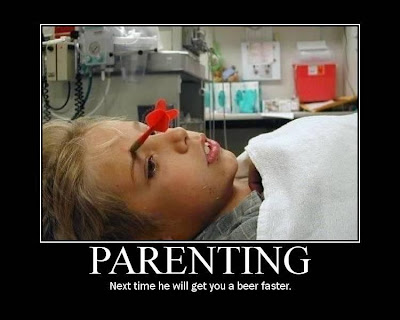 Just to clear things up this is a "GIRL."
Her younger brother threw the dart at her. 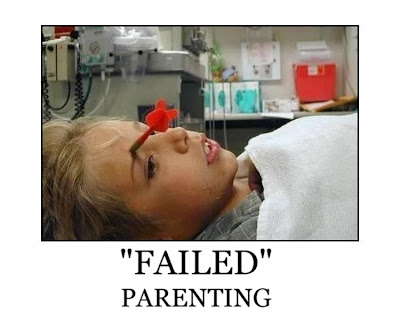 Chevy Volt to Get 230 MPG Rating 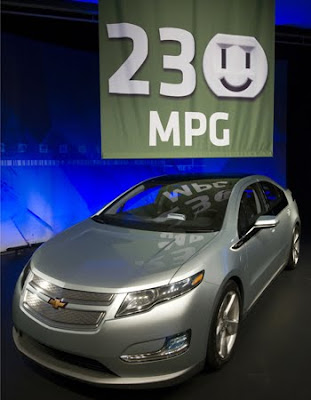 .
General Motors said Tuesday its Chevrolet Volt electric car could get 230 mpg in city driving, making it the first American vehicle to achieve triple-digit fuel economy if that figure is confirmed by federal regulators.
But when the four-door family sedan hits showrooms late next year, its efficiency will come with a steep sticker price: $40,000.
Still, the Volt's fuel efficiency in the city would be four times more than the popular Toyota Prius hybrid, the most efficient car now sold in the U.S.
Most automakers are working on similar designs, but GM would offer the first mainstream plug-in with the Volt, which seats four and was introduced at the 2007 Detroit auto show.
.
Posted by The Man at 8/12/2009 No comments: 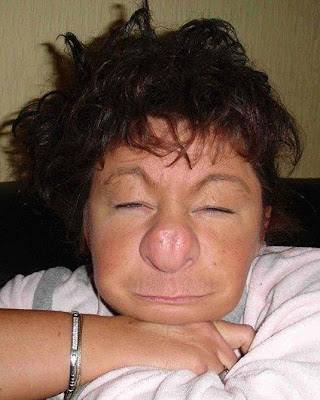 How man ended his wife's nagging
The man jumped into a fast-flowing river because he couldn't take his wife's nagging anymore.
The Chinese lorry driver, known as Zhou, and his wife were on a ferry on the Yangtze River when it all became too much for him, the Chongqing Evening Post reports.
Members of the ship's crew saw the man suddenly run out of his cabin with his hands covering his ears, and shouting: "I can't stand it any longer."
They initially thought he was suffering from an ear injury and went to help him but found he was unhurt.
"While we were still puzzling over the this, his wife ran up and continued nagging him," said a crewmate."
The husband covered his ears again and said: 'I need a break' before jumping over the side into the rushing river.
"We immediately found lamps to light up the water but found nobody. The possibility of survival can be zero."
However, later that night, police found the man who had managed to swim about 2km across the broad river.
"I felt I was dying, but even that's better than my wife's nagging," he reportedly told the police.
The couple were reunited the following morning at the local police station where Zhou's wife promised to give up her habit of nagging him.
.
Man recovers after being punched and robbed while impaled on stake
An Australian man is in a stable condition in hospital after he was impaled by a garden stake in a motorcycle crash, then reportedly robbed and assaulted at the accident scene.
A South Eastern Sydney Illawarra Area Health Service spokesperson said the 39-year-old man, who was airlifted to St George Hospital on Sunday afternoon, was originally admitted in a serious but stable condition but had since improved.
The man allegedly stole a motorbike and was riding it along Adelaide St, Greenwell Point, when he lost control and slid into a garden bed at 1.45pm on Sunday. A timber meter-long garden stake was driven through his right armpit and out his back, while a puncture wound was also found on his leg.
NSW Ambulance officers said they responded to reports of a man who had a garden stake in his torso and required surgical intervention.
Paramedics arrived to find the man conscious and the stake already pulled from his body. Nowra police said there was no motorcycle at the scene when authorities arrived.
A source said the owner of the bike had caught up with the rider, pulled out the stake and punched him on the nose before taking his wallet and reclaiming the motorcycle. The injured man was taken to hospital suffering internal injuries and a suspected broken nose.
.
Wisconsin Girl, 13, Charged in Fatal Stabbing Over Milk
A 13-year-old Milwaukee girl accused of fatally stabbing her step-grandfather because he poured her milk down a drain is being held on $150,000 cash bond.
The girl appeared Tuesday in Milwaukee County Children's Court. She is accused of stabbing 48-year-old Robert A. Moon in the neck on Saturday after he allegedly poured out milk that she wanted for her cereal.
Public defender Joy Sherard says there's a family history that has required intervention from county officials, but declined to elaborate.
The Associated Press previously released the girl's name but is no longer doing so after Judicial Court Commissioner Kevin Costello banned the media from identifying her. Costello says he wants to protect her privacy because the case may get waived back to juvenile court.
.
Man to marry pillow
A Nigerian man who says he cannot get a girlfriend because of his bad stutter has announced plans to marry his pillow.
Okeke Ikechukwu, 26, a labourer, from Lagos, told the Daily Metro that his stammer made it difficult for him to speak to girls.
"Since I am a stutterer, ladies have always laughed at me whenever I try to talk to them," he said.
"I have needs, and so I have taken to sleeping with my pillow in my arms ever since I was 16. I have grown to fall in love with it, and I intend to spend the rest of my life with it."
Mr Ikechukwu also said that, unlike a woman, the pillow would cost him little or nothing to maintain for the rest of its life.
"I think it will make the ideal mate for me," he said.
.
Posted by The Man at 8/12/2009 No comments: 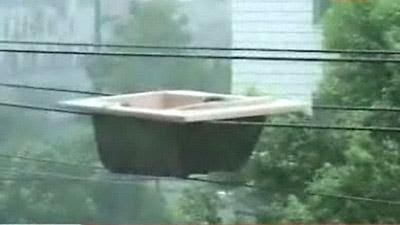 Electricity had to be cut off after 75mph winds from Typhoon Morakot blew a bath onto 40ft high power cables in China.
The bath ended up resting on high voltage cables over a road in Longgang town, Wenzhou, in eastern China's Zhejiang province, reports People's Daily.
It is believed the bath was being thrown out by a nearby hotel and had been left on a balcony where the wind picked it up.
Emergency workers equipped with a cherry picker managed to untangle the bath from the powerlines and lower it safely to the ground after electricity workers temporarily turned off the grid.
"It was amazing it managed to land on the cables without snapping them," said one worker.
More than a million people were evacuated from their homes as Typhoon Morakot swept through China claiming at least six lives.
.
Posted by The Man at 8/12/2009 No comments: